Special Gift Ideas for That Technical Someone in Your Life

It's an annual tradition at TNS — our own gift guide for that technical someone in your life. Perhaps a Jurassic Park chess set or an alarm clock shaped like a PlayStation controller?
Dec 10th, 2022 7:00am by David Cassel 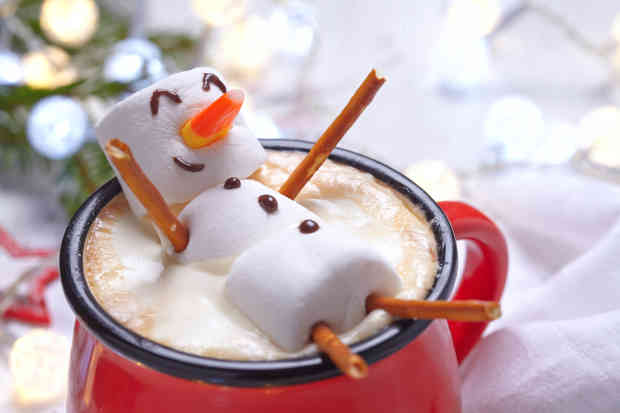 It’s an annual tradition at TNS — our own gift guide for that technical someone in your life.

But whatever wacky gift you end up giving this year — whether it’s a Jurassic Park chess set or an alarm clock shaped like a PlayStation controller — it’s still the thought that counts. Your favorite technical someone will appreciate you were thinking about them enough to brave that hunt for the perfect technical gift. And these suggestions just might earn you a genuine smile…

You can’t go wrong with the new geek-friendly book by XKCD cartoonist Randall Munroe. With a straight face and obsessive earnestness, he tackles the science behind some strange hypotheticals posed by readers of his comic strip. (“There are questions about lasers, explosions, swingsets, candy, and soup,” Munroe explained in a recent blog post. “Several planets are destroyed — one of them by the soup.”)

In fact, one of the highlights of the year was when Minute Physics, a science YouTube channel, animated questions from Munroe’s new book. Specifically: What if Pluto were plutonium? And Uranus uranium? And Mercury mercury? (“Spoiler alert!” warns the video’s narrator. “This won’t end well…”)

Over the summer Wired published Munroe’s answers to two particularly silly questions. What if some of outer space turned to soup? And what if you tried to swallow a cloud? And the book’s official website gives more examples of the educational nuttiness that’s waiting inside. “Before you go on a cosmic road trip, feed the residents of New York City to a T. rex, or fill every church with bananas, be sure to consult this practical guide for impractical ideas.

“Unfazed by absurdity, Munroe consults the latest research on everything from swing-set physics to airliner catapult-design to answer his readers’ questions, clearly and concisely….”

The highly-awaited book has become a minor publishing phenomenon. As the cartoonist himself pointed out this week, “Just type What If 2 into some random box on your device; it’ll probably work.” There’s even an audiobook version that’s read by Wil Wheaton.

And best of all, the cartoonist has already managed to work the book into three of his own cartoons.

If your favorite geek is more interested in board games, the New York Times store now offers a home version of the hottest online game of the year. Wordle: the Party Game is a kind of Wordle with friends, where a live “Wordle Host” travels around the room distributing yellow and green squares in person onto each player’s dry-erase Wordle boards. (So players can compete against each other in real-time.) For even more word game-themed swag, the store also offers a line of Wordle pins, Wordle water bottles, and Wordle baseball caps.

But it gets even more intense. Over on Etsy, fans have taken everything up a level with Christmas ornaments, stockings, and even customizable 3D-printed Wordle earrings. And to make things even geekier, you can download your own 3D printer model for generating all the parts for assembling exact replicas of your Wordle score every day. (CNET suggests wearing it around your neck on a lanyard.)

Math-lovers may instead prefer Nerdle, the fan-grown Wordle alternative where the five-letter words are replaced by an 8-symbol equation. So for all those math-positive Nerdle fans there’s an official store of their own, offering t-shirts honoring their geeky game and all of its gnarly variants — from the two-equation Binerdle to the six-symbol mini-Nerdle. 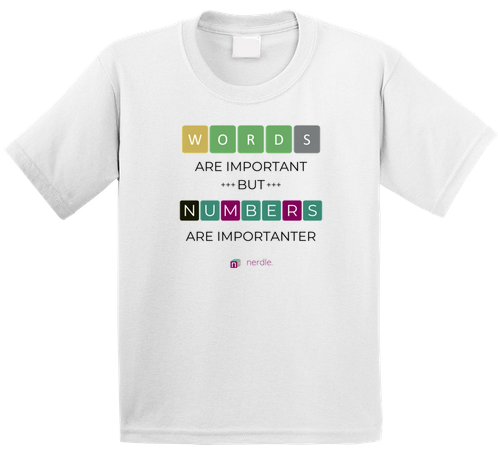 There are dozens of shirts to choose from, with pithy math-positive slogans like “safety in numbers” or “divide and conquer.”

There are even Nerdle t-shirts for your dog — and of course, the official Nerdle-themed coffee cup.

3. Star Wars: The Drives of Skywalker 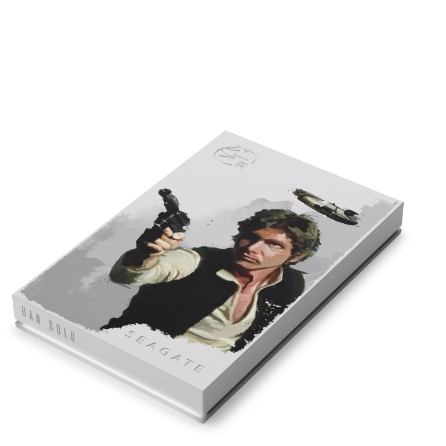 That’s the two-terabyte special edition Han Solo external drive (which Seagate promises is “designed with the confidence of the infamous smuggler and pilot… Plus, you can gather a bounty of games, files, and media thanks to its massive capacity.”)

If you don’t want to get so cocky, there’s also a Luke Skywalker drive, “designed with the propulsive purpose of its hero” and “destined for greatness.” But if you purchase Seagate’s Darth Vader drive, “darkness falls upon your collection.” (Albeit with “formidable capacity at your fingertips….”)

It’s the perfect gift when the one you love already has a matching set of Star Wars salt and pepper grinders.

For fans of The Mandalorian, Seagate is also selling drives lovingly emblazoned with Boba Fett, Grogu, and the Mandalorian himself. 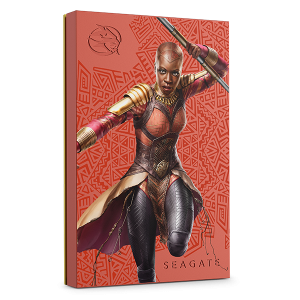 For the ultimate geek novelty item, watchmaker Tomoro is selling a watch that only displays its time as a block graph. (“A real conversation starter…” says its description on Amazon, “guaranteed to draw attention and questions wherever you go.”) One reviewer awarded it five stars, writing “I love the confusion this watch causes for someone trying to read it!!” And another gushed that it was “an amazing, geeky way to measure time.” 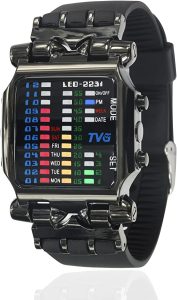 Though Tomoro is billing it as “Mens Binary Matrix” watch, exactly one of the 63 reviewers on Amazon was geeky enough to truly fathom its dirty secret. It’s not binary numbers at all — but base 5 (rather than base 2).

Yet you can almost hear Santa Claus whispering reassuringly to gift-shopping geeks that yes Virginia, there are binary-number wristwatches. 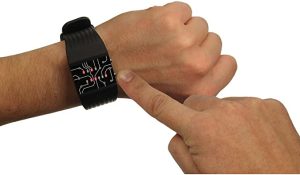 “The LEDs represent 32, 16, 8, 4, 2, 1,” explains Amazon’s listing for the getDigital Binary Wrist Watch for Professionals. “Just add up the glowing numbers and you are done!”

For those late-night coding sessions when “pair programming” just means coding with a cup of coffee — at least there’s a coffee cup speaking your language. (Choose carefully — cups are available with both Python or C++ code.) 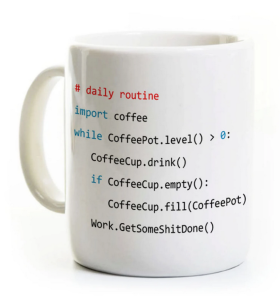 In fact, Etsy is full of programmer-themed coffee cups. One even offers a coder-centric version of the classic song “99 Bottles of Beer on the Wall.” 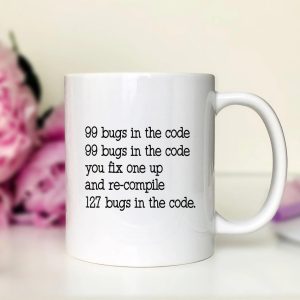 While other coffee cups get right to the point… 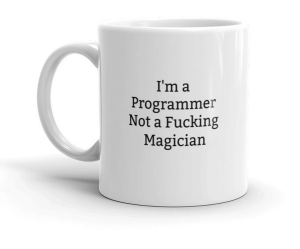 Just remember that in the end, these gift suggestions aren’t just our favorite geeky things. They’re fond reminders of all the fun we’ve had working together this year — and a chance to honor all of those geeky ways that we play.

So each gift offers one more holiday chance to come together around some common interests, in the magical space where ideas meet laughter, and a nerdy sense of humor turns into playful Christmas fun.

Have a Happy Holiday!