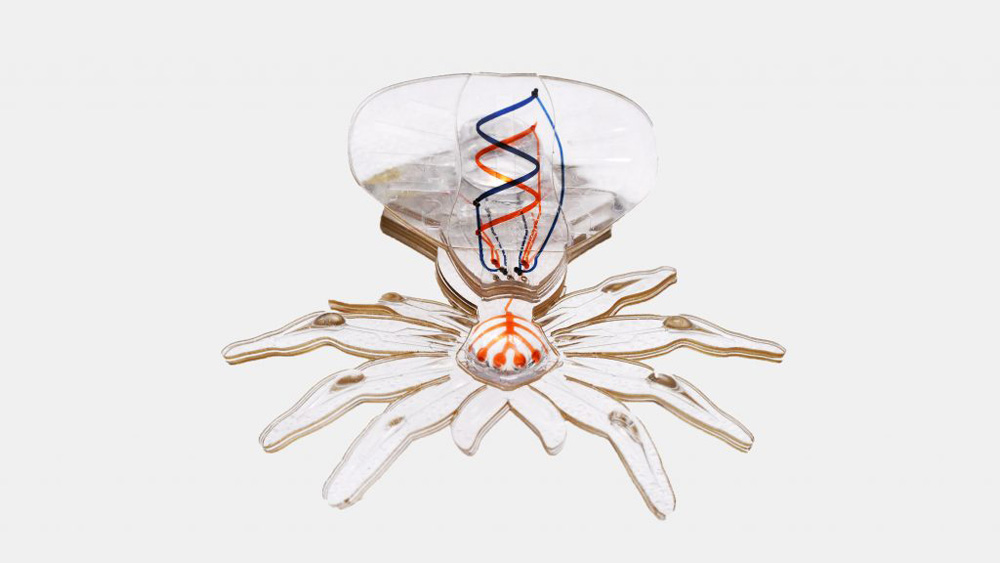 The old-fashioned image of the rigid, awkward, tin-can robot changing as increasingly realistic-looking humanoid robots of all shapes and sizes make their debut. But the field of robotics isn’t limited to these larger, human-sized machines; there are also smaller, softer robots emerging now that have animal-like features and are controlled with microfluidic circuits, as well as blobby robots that could someday explore the treacherous terrains of other planets.

Looking to create a robot smaller than a centimeter that might someday perform precision surgery or help destroy tumors, researchers from Harvard University’s Wyss Institute and School of Engineering and Applied Sciences (SEAS),  and Boston University looked to nature for inspiration, and developed a novel microfabrication technique to construct it. Their tiny robot looks like a rubbery, transparent spider — and in fact, the team modeled the form after Australia’s famously colorful and captivating peacock spider. Watch:

Dubbed the Microfluidic Origami for Reconfigurable Pneumatic/Hydraulic (MORPH) robot, the robot is made out of 12 layers of silicone material that have been generated using a soft lithography technique. Each layer has been cut using a mold and a laser-based, micromachining technique, which was then bonded together to create the spider bot in its entirety, creating a monolithic structure. Ink dyes of different colors were then added in to give color to the eyes and patterning to the robot’s abdomen. 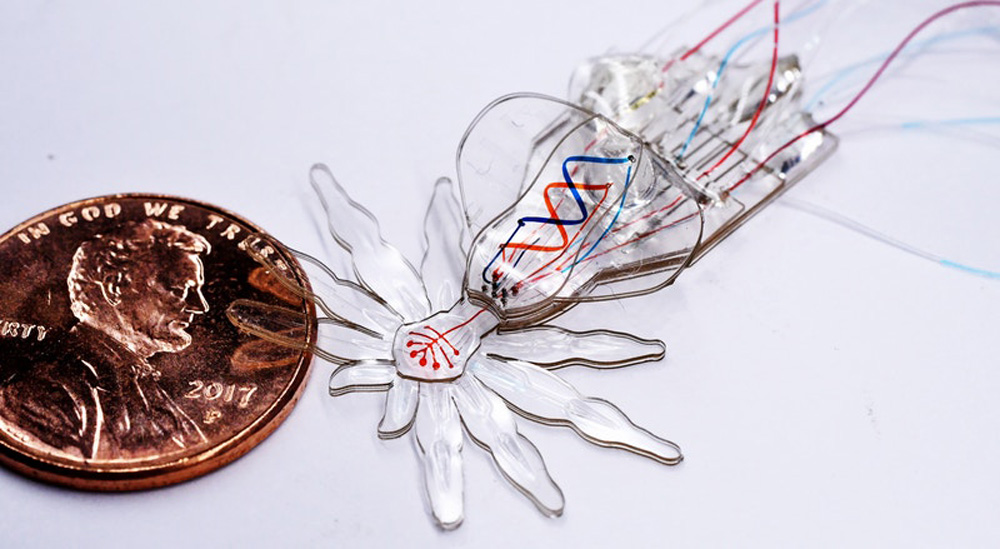 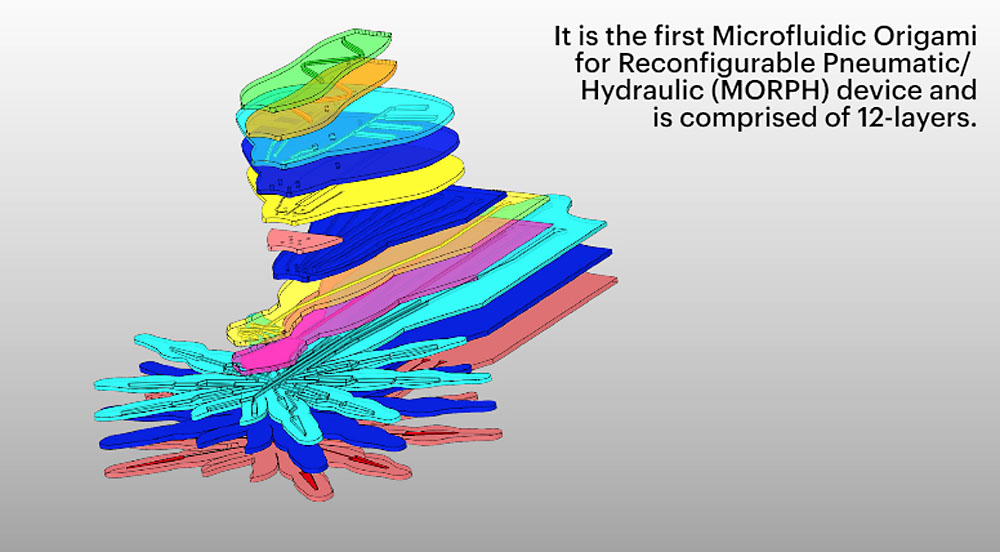 But what’s unique to the design is an embedded network of vein-like, hollow microfluidic channels that are interwoven into the layers. Using another method called injection-induced self-folding, researchers can pump in liquid materials or air, filling microfluidic actuators that can change the bot’s shape. If phase-changing materials, such as UV-curable resin is injected, these will harden once exposed to ultraviolet light, thus structurally “locking” the deformed microfluidic actuators and making the transformation more permanent.

“We can precisely control this origami-like folding process by varying the thickness and relative consistency of the silicone material adjacent to the channels across different layers or by laser-cutting at different distances from the channels. During pressurization, the channels then function as actuators that induce a permanent structural change, said Tommaso Ranzani, Ph.D., who is the first author of the paper, published in Advanced Materials. 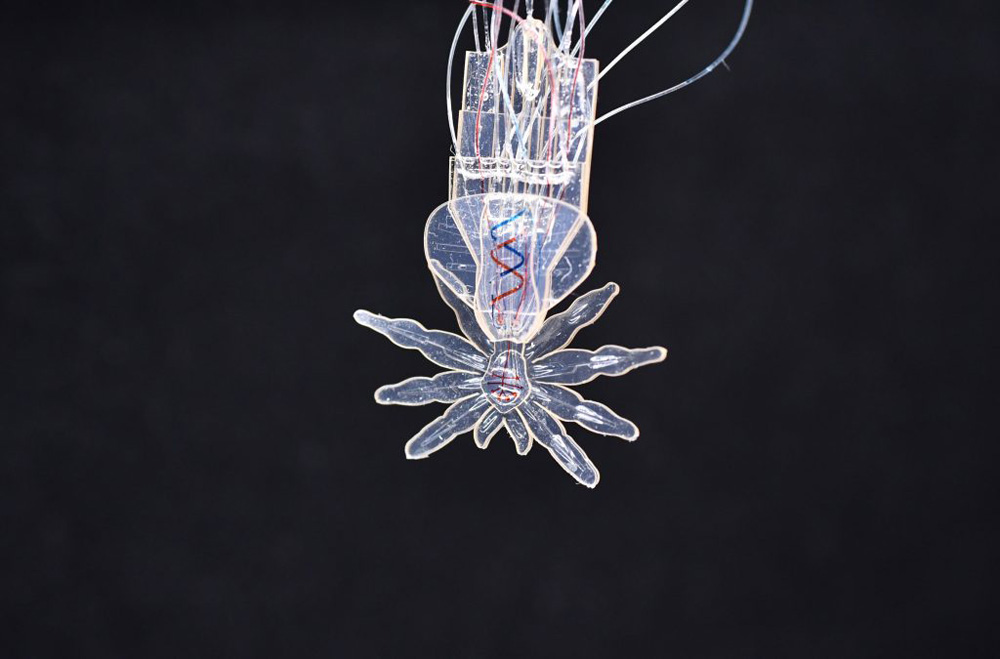 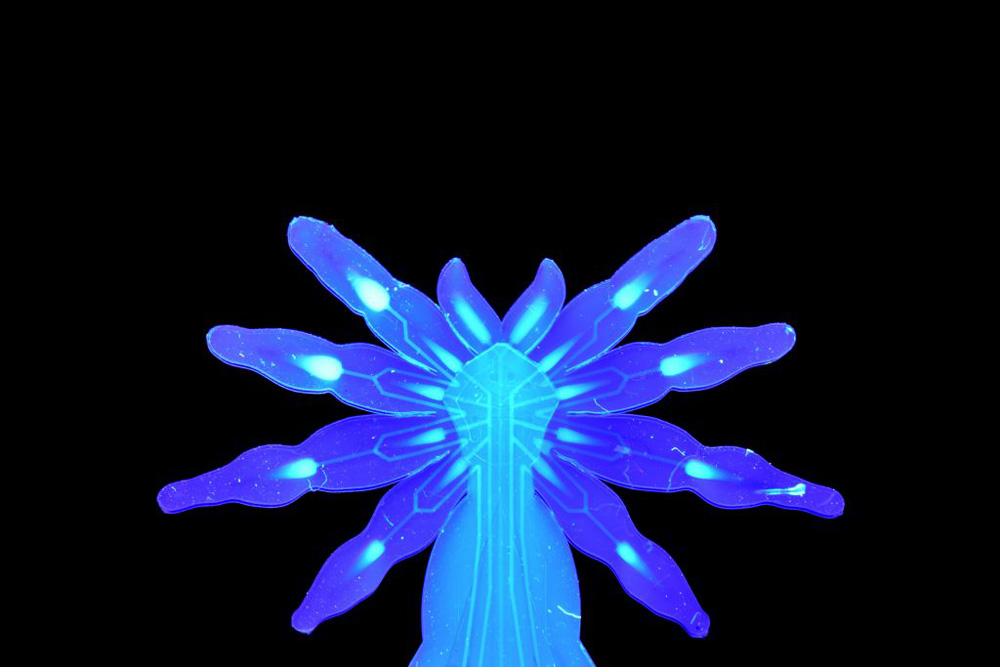 “The smallest soft robotic systems still tend to be very simple, with usually only one degree of freedom, which means that they can only actuate one particular change in shape or type of movement,” said study co-author Sheila Russo, Ph.D. “By developing a new hybrid technology that merges three different fabrication techniques, we created a soft robotic spider made only of silicone rubber with 18 degrees of freedom, encompassing changes in structure, motion, and color, and with tiny features in the micrometer range.” 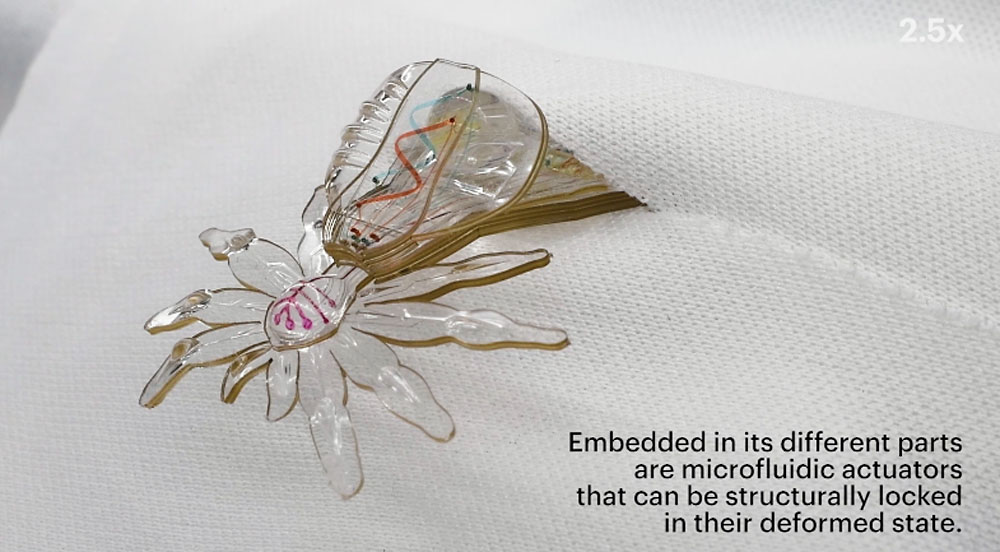 This wider possibility for movement means that the MORPH robot can have fluids pumped into it in at regular intervals to deform one leg or the other, to perform motions like walking, for instance. The team notes that MORPH’s innovative approach to microfabrication not only means that it can make the design and production process more streamlined, but it could potentially widen the appeal of soft robotics for researchers who are looking to develop smaller, more flexible robots for medical purposes. Right now, soft robots are relatively simple compared to their more rigid cousins, but if developed further, it could mean that someday, tiny and soft robots such as these might be sent into the human body to implement microscale surgery or perform an endoscopy to show what’s going on inside, without too much discomfort.

SHARE THIS STORY
RELATED STORIES
Boost Customer Engagement with Real-Time Data Azure Went Dark State of the API: Monetizing API Deployment Is on the Rise 5 Security Principles to Guide Your DevSecOps Journey Poisoned Lolip0p PyPI Packages
SHARE THIS STORY
RELATED STORIES
How New Sony AI Chip Turns Video into Real-Time Retail Data Boost Customer Engagement with Real-Time Data FAA Flight Cancellations: A Lesson in Application Resiliency Why Trust and Autonomy Matter for Cloud Optimization Poisoned Lolip0p PyPI Packages
THE NEW STACK UPDATE A newsletter digest of the week’s most important stories & analyses.
The New stack does not sell your information or share it with unaffiliated third parties. By continuing, you agree to our Terms of Use and Privacy Policy.