When Netflix and Google get together to produce a continuous delivery platform, you can bet people sit up and take notice. Today, Spinnaker, the product of that collaboration, reached version 1.0. The project’s ultimate goal is to support global, multi-cloud deployments, and automated releases across those deployments.

“In Spinnaker, deployments are orchestrated using custom release pipelines, the stages of which can consist of almost anything you want — integration or system tests, spinning a server group up or down, manual approvals, waiting a period of time, or running a custom script or Jenkins job,” wrote Christopher Sanson, product manager at Google, in a release blog detailing the 1.0 changes and how Spinnaker works overall.

Originally created at Netflix, Google first took notice of Spinnaker in 2014. By November of 2015, Spinnaker was open sourced by Netflix as the project began to take on new users in companies like Target, Oracle, and Microsoft.

Today’s release includes the work of the past four years towards supporting multiple clouds. As of today, Spinnaker supports Google’s cloud platforms, AWS, Microsoft Azure, Kubernetes, and OpenStack. Oracle Bare Metal cloud will be supported by the end of the year.

Spinnaker also supports things like release canaries, multiple staging environments, blue/green or red/black deployments, traffic splitting and easy rollbacks. Spinnaker itself even includes a tool to make it easier to manage it. With the release of Spinnaker 1.0, the project now also includes halyard, a tool for configuring, installing and updating the platform.

The Spinnaker project as a whole includes a few other tools for care and feeding. This includes the deck, which is a management UI, some monitoring tools, a command line interface called roer, and igor, which handles integrations between Spinnaker, git, and Jenkins. 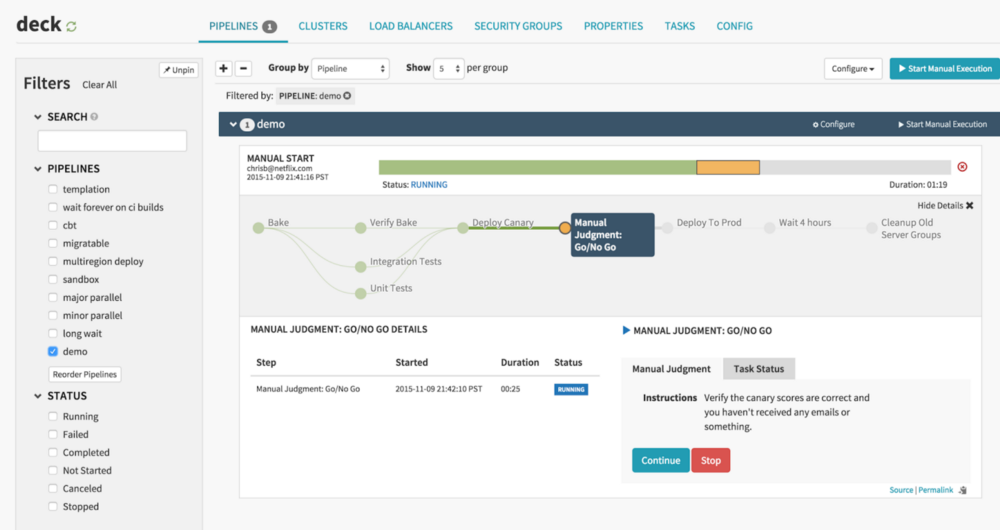 Spinnaker can apply these roles directly to a development stage, meaning access to pipelines can even be restricted to require a manual approval process if need be. Stages can also be restricted based on time of day or week, meaning that new deployments can automatically be rolled out late at night.

The 1.0 release also provided a reason to redesign the Spinnaker Website. And, as Spinnaker originated at Netflix, it’s also compatible with Chaos Monkey, meaning Chaos can be brought to bear upon specific stages in the Spinnaker pipeline.

A 20 year veteran technology journalist, Alex Handy cut his teeth covering the launch of the first iMac. His work has appeared in Wired, the Atlanta Journal Constitution, and The Austin American Statesman. He is also the founder and director...
Read more from Alex Handy
SHARE THIS STORY
RELATED STORIES
GitHub Actions Were Vulnerable to Rust Artifact Poisoning How Yarn Workspaces Accelerated LinkedIn Code Delivery Building a To-Do App using GitHub Actions, Playwright, Next.js A Look at Kubernetes Deployment Top 5 Considerations for Better Security in Your CI/CD Pipeline
SHARE THIS STORY
RELATED STORIES
CircleCI to Customers: Change All Secrets and API Tokens NOW! EngFlow Harnesses Google Bazel for Faster Monorepo Builds Kubescape: A CNCF Sandbox Platform for All Kubernetes Security Interest Growing in Dart and Flutter for Mobile Argo CD and Flux Are CNCF Grads: But What Now?
THE NEW STACK UPDATE A newsletter digest of the week’s most important stories & analyses.
The New stack does not sell your information or share it with unaffiliated third parties. By continuing, you agree to our Terms of Use and Privacy Policy.