The open source environment is a pillar of the tech community, explained Spotify’s Head of Technology, Tyson Singer, in a recent blog post. Almost every company, including Spotify (and as far back as the early days of Spotify), incorporate open source tech into their stacks. Even if only looking at the use of frontend tech, with React, Angular, and Vue all being open source, it’s pretty hard to argue that open source is pervasive across all industries.

Singer takes it one step further though and points out that while open source use is growing, the community of open source maintainers is not. An ecosystem is unable to sustain itself if the work keeps growing but the number of contributors do not. Spotify hopes to do its part to change that.

Spotify is one of a number of companies that are starting or revitalizing their OSPOs, and with good reason. As Spotify has found, a coordinated effort can lead to more and better contributions with its own open source projects. It can help better secure its own software supply chain (a growing concern around open source these days). In a recent survey, the Linux Foundation found that 63% of organizations that have an OSPO deemed “very critical” to the success of their engineering or product teams. 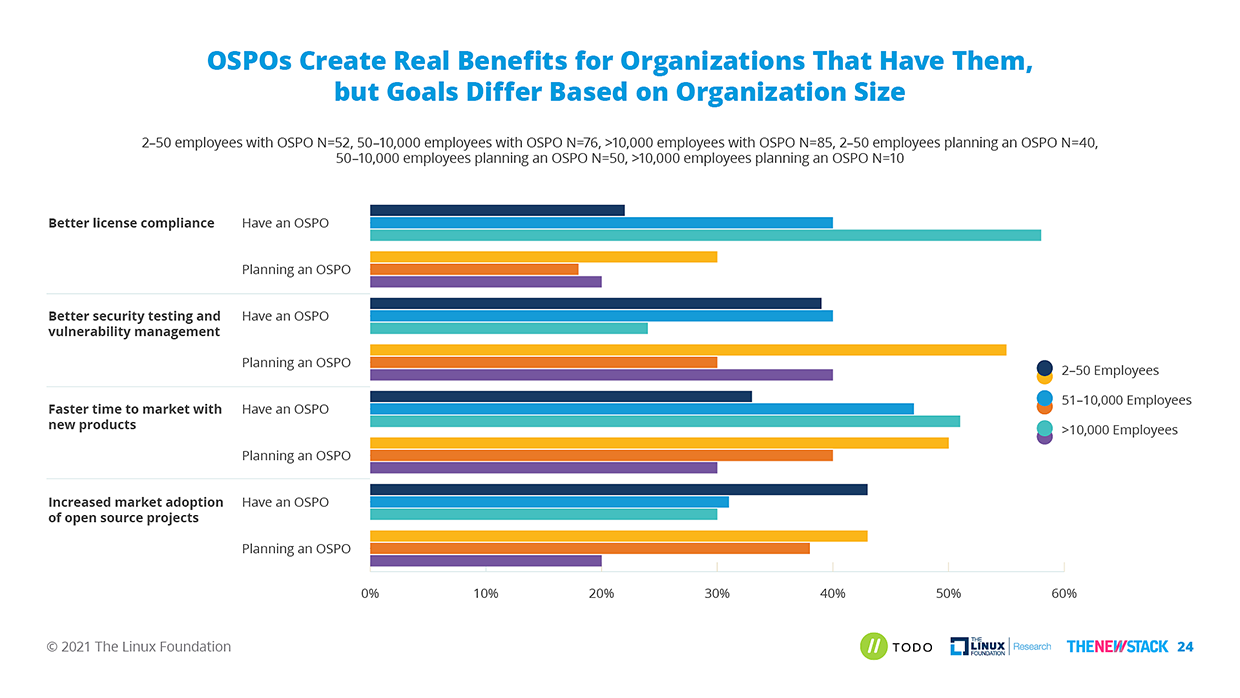 Spotify is a user and contributor to the open source community. Though its open sourced a few internal technologies, Backstage is its most notable to date. The tech itself is designed to build custom developer portals, unify tooling, services, apps, data, documents, and several other features that make the developer’s life a little easier. The tech is used by Netflix, IKEA, HP, and Expedia to name a few.

In an April interview with VentureBeat, Singer elaborated on the value added from open sourcing Backstage. The development team got feedback from a diverse set of contributors that range from engineers at some of the world’s largest companies to small individual contributors. Internal hires could not provide that type of feedback Singer said.

Signer recognized that if not Backstage, there is a likelihood of another product coming up in place of Backstage. If this were true, and this other product received all the open source benefits Backstage did, then it was also likely that this fictional tech would be superior. Following this thread then, there would be a development cost associated with migrating from Backstage to the new tech when it eventually eclipsed Backstage.

Spotify’s OSPO isn’t new per se since it’s been around for almost a decade now but it does have a new zest to it. In the past, the OSPO consisted of a group of full-time employees with their main dedication at Spotify focused elsewhere.

Currently, the OSPO’s home resides in the Platform Strategy Unit, however, this will ultimately span across multiple teams, allowing developers to share their tools, research, and experiments.

Over the course of the next year, Spotify’s FOSS Fund will donate to different independent, actively maintained open source projects that align with Spotify’s own open source values. The initial monetary amount is specified as the testing amount. Spotify aims for real, meaningful impact with this fund. Spotify will take a more methodical approach in evaluating tech and see where the impact lies and use that information to make tweaks to the program if necessary.

The projects were nominated by Spotify’s internal R&D community of engineers, data scientists, researchers, designers, and product managers. Each nominee was something a team member believed strongly in. Spotify plans to release the list of final recipients on their engineering blog in the near future.

Hope for the Future

Singer recognizes Spotify’s role in making the open source ecosystem more sustainable. With the vast resources at Spotify’s disposal, the company executives do feel an increased sense of responsibility to use those resources, Singer asserted. They hope that other companies are inspired by their open source initiatives to take an active or more active role in participating, contributing to, and strengthening the environment. Singer believes these ideas, just like the nature of open source technologies, will only get better in time.