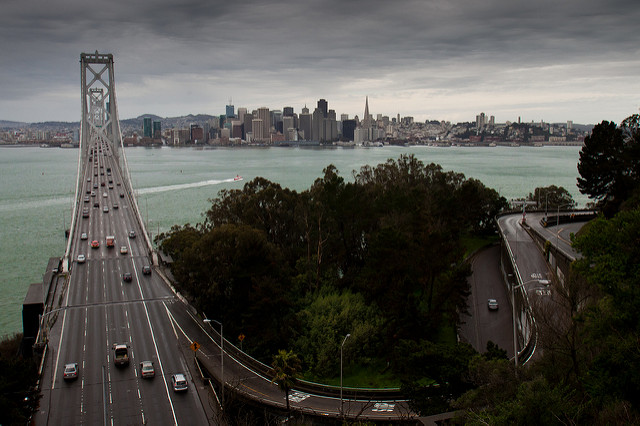 “Our intent is to stitch together the Kubernetes ecosystem into the control plane so you can build out Kubernetes clusters on any cloud provider and be able to deploy solutions like Sysdig and Fabric8 and continue to add more of those third parties,” said Matt Baldwin, StackPointCloud CEO.

The software also simplifies the process of deploying a Kubernetes cluster, streamlining the process down to three steps.

The company announced the new technology at the KubeCon conference, being held this week in Seattle.

The Kubernetes Federation Control Plane (originally called “Ubernetes”) provides a central federated namespace, using the etcd data store, to keep track of clusters running across multiple deployments. This could be useful for organizations that wish to run containerized operations across multiple cloud providers, for purposes of load balancing, failover, and generally not getting locked into a single cloud provider.

“We’re trying to make it as easy as deploying a DigitalOcean droplet,” Baldwin said. “We try to remove a lot of the underlying complexity. We try to make it as simple as possible to set up Kubernetes.” 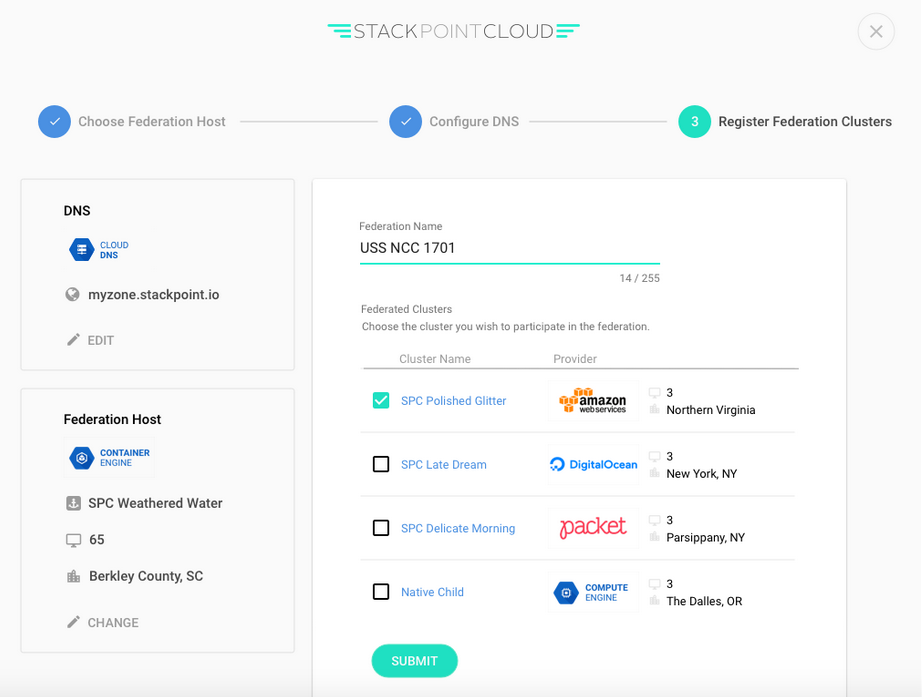 “We make a lot of best-practices decisions behind the scenes and try to make it a clean interface. We don’t want users to get confused, and that was one of the primary problems with the Kubernetes project was usability as well as build consistency,” Baldwin said.

It pre-installs things like the dashboard — it tunnels that through an SSL connection, so it’s always secure. It pre-create the kubeconfig file, so users just download that and can begin to use kubectl. There’s also an onboarding file that allows users to drag-and-drop Docker Compose files into the StackPointCloud interface; it checks the file to make sure “you don’t have anything wonky going on in it,” then converts that into a set of Kubernetes manifests that are repackaged as an application that users can just send it into the cluster.

The company officially launched in May at CoreOS Fest in Berlin.

It was built on the idea of providing one-click implementations of complex architectures, Baldwin said. To put food on the table, however, it took on contract work — it was being approached by cloud providers to provide various DevOps tooling and other work. It’s now a 13-person team, 9 of whom still work on the services contracts.

It started working with Kubernetes back when it was 0.11 and have since been iterating on a prototype. Closer to CoreOS Fest, it started working more closely with CoreOS and Packet on the Trusted Platform Module (TPM) for bare metal deployments.

“We’re all about high usability, beautiful interfaces and choice, so users don’t have to be forced into a particular stack,” Baldwin said.

It announced HAProxy for Kubernetes in September and is working to contribute that back into the Kubernetes project.

It also plans to contribute a node cluster autoscaler for each of its supported cloud providers.

It also worked with Red Hat on the integrated developer platform fabric8. It automated the entire process, so users can build the developer platform in about 10 minutes, Baldwin said. While that’s targeted at Amazon, support for other cloud vendors will be added later.

“We’re building a lot of ‘highway’ into Kubernetes. We want to build a lot of onboarding tools. The Docker Compose was the first one. We have plans for others,” Baldwin said.

It also working to get people to be able to federate clusters from, say, Amazon into Google, so they can choose where they want to place their workloads.

“There’s still a lot of work there in the project to facilitate that kind of dream scenario: all your workloads are running Kubernetes and you can just move them between cloud providers. There are a lot of paths, like the Amazon Relational Database Service (RDS) in Amazon that’s very hard to get away from, but we’re trying to build that ideal. Have some of your workload running on Packet if you need bare metal while the rest of your workload is running in DigitalOcean — things like that,” he said.

The company will be announcing other offerings in December. It’s working to fill out more of the lifecycle, such as how to handles upgrades and challenges around maintaining versions. As more providers are brought in, it will have to deal with into issues of versions and compatibility.

“We also want to build onboarding stories for people who want to move away from ECS or away from Rackspace’s container solution. We think Kubernetes is more democratic — it can run anywhere. So if you have a solution, but you’re tired of it, how do you migrate to Kubernetes easily?”

CoreOS, DigitalOcean, Docker and Red Hat are sponsors of The New Stack.

Feature Image: “Swirl Me Back Home” by Nick Fisher, licensed under CC BY-SA 2.0.

Susan Hall is the Sponsor Editor for The New Stack. Her job is to help sponsors attain the widest readership possible for their contributed content. She has written for The New Stack since its early days, as well as sites...
Read more from Susan Hall
SHARE THIS STORY
RELATED STORIES
WebAssembly Needs Schedulers, and Kubernetes Doesn't Quite Fit the Bill How to Implement a Security Scanner for Docker Images The Next Evolution of Virtualization Infrastructure 4 Ways to Use Kernel Security Features for Process Monitoring WebAssembly vs. Kubernetes
TNS owner Insight Partners is an investor in: The New Stack, Docker, Sysdig.
SHARE THIS STORY
RELATED STORIES
.NET 7 Simplifies Route from Code to Cloud for Developers Install Dozzle, a Simple Log File Viewer for Docker Connect to Remote Docker Machines with Docker Context The Next Evolution of Virtualization Infrastructure Docker versus Kubernetes: Start Here
THE NEW STACK UPDATE A newsletter digest of the week’s most important stories & analyses.
The New stack does not sell your information or share it with unaffiliated third parties. By continuing, you agree to our Terms of Use and Privacy Policy.