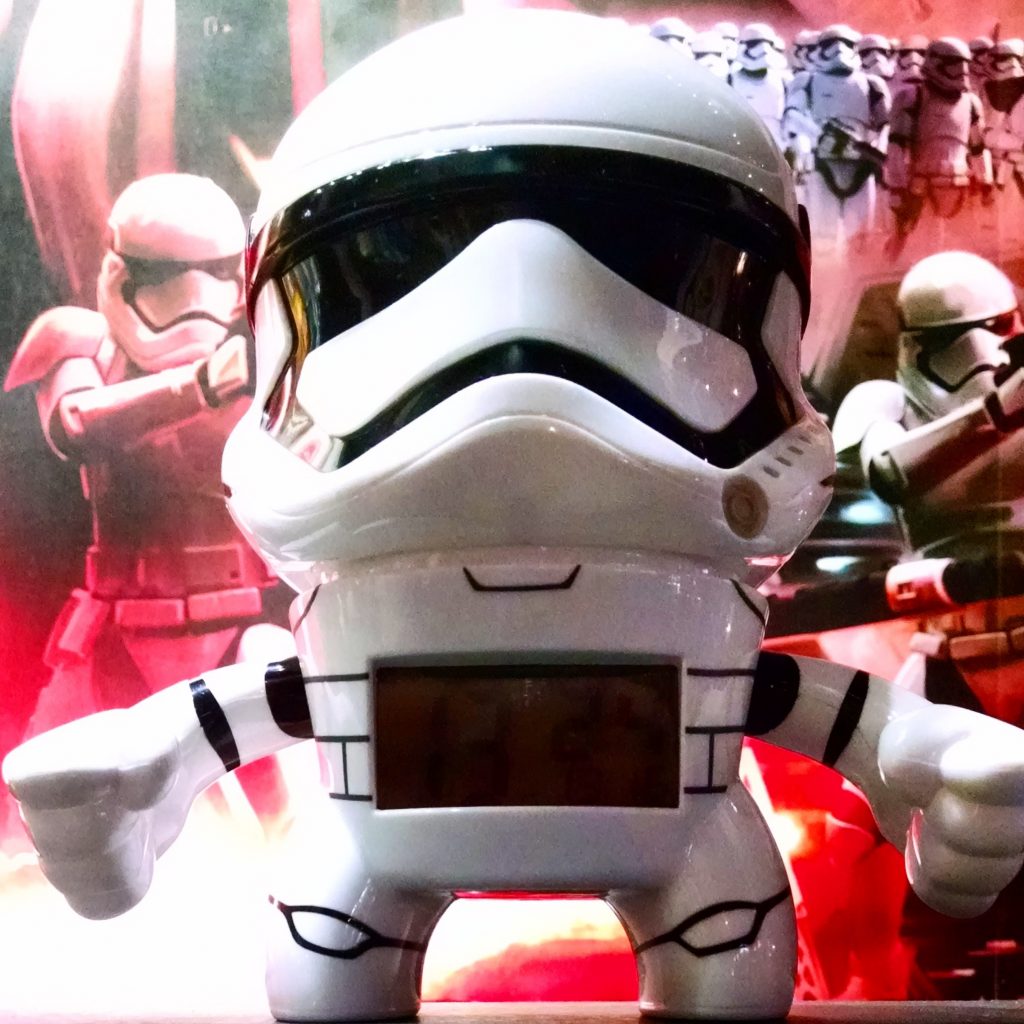 Star Wars is everywhere. It’s like The Force: It’s all around us, and impossible to escape. As the countdown begins for the December 18th release of Star Wars: The Force Awakens — the franchise’s first new movie in 10 years — it seems that enthusiastic promotions are appearing any place and every place. The extraordinary volume of tie-ins may actually make this the single largest marketing campaign in human history, and like some great Cantina of marketing, the tie-ins seem to keep getting weirder and weirder. 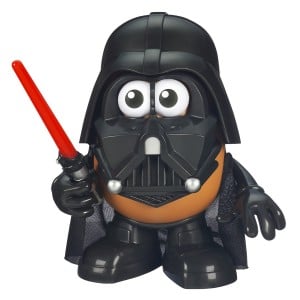 But the new film is also tapping forms of marketing that didn’t even exist when the original Star Wars was first released in 1977. Last month the Waze app began offering users the ability to hear their driving directions delivered by C-3PO. Verizon became the officially-licensed carrier, promising its customers “The Force of a better network” and offering them an exclusive Star Wars version of the Google Cardboard viewer. And Hewlett Packard even has a special edition notebook computer “with a Galactic Empire-inspired design.”

The big marketing bang began almost eight months ago. Guinness World Records was already acknowledging Star Wars as the #1 all-time top movie franchise when it comes to tie-in merchandising. In June, their record-keepers cited a 2012 estimate of the franchise’s total worth at £19.51 billion, then announced that Star Wars had also just broken another record.

On April 16, a two-minute teaser for the film became YouTube’s most #1 viewed movie trailer over a 24-hour period. Within one day it had been watched more than 30 million times — and since then had racked up over 40 million more views. But even that trailer ends with more marketing, in the form of links to the Star Wars Battlefront video game, and more videos about Star Wars Celebration Live, a fan festival held in May in Anaheim (“Powered by Verizon!”).

The Walt Disney Company acquired LucasFilm in 2012, and they’re apparently applying a mastery for marketing. Wired points out The Force Awakens has also found its way onto several high-profile TV shows. “On Disney-owned ABC, Good Morning America’s anchors revealed new Star Wars toys and dressed up as Star Wars character” Wired noted, adding that Disney also released a video in October in which Pixar’s Inside Out characters watch the Star Wars trailer. On the American Music Awards — also on ABC — the 73-year-old Harrison Ford introduced a special tribute to the music of John Williams, in which a capella group Pentatonix performed a vocals-only medley of Star Wars melodies, before being joined by an accompanying orchestra. And over on NBC, director J. J. Abrams introduced a segment on Saturday Night Live, in which the show’s casts impersonated various celebrities auditioning for the film with two of the new film’s actual stars, Daisy Ridley and John Boyega. 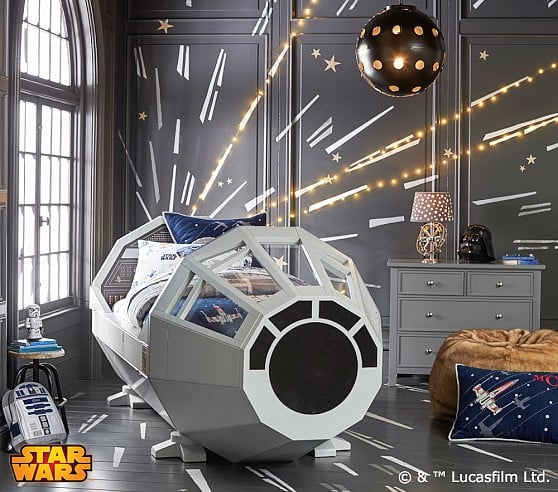 But it’s also turning up in other franchises. Pottery Barn is selling a $3,999 bed that’s shaped like the Millenium Falcon’s cockpit — as well as a cheaper series of Star Wars bedspreads. Subway is offering glowstick lightsabers in their meals for kids. Star Wars footage and music are officially licensed for a series of ads about cars — Dodge, Chrysler, FIAT, Jeep Renegade, and Ram Trucks. There are even Star Wars shoes from Adidas.

Star Wars has also invaded our food supply. The Los Angeles Times dutifully reported the developments in a series of headlines in their “Daily Dish” food blog:

Yes, Kraft’s Macaroni & Cheese Dinner is now available with Star Wars Shapes. “All your favorite Star Wars characters are coming to your dinner table from a galaxy far, far away. And they now have no artificial flavors, preservatives, or synthetic colors,” the documentation reads. 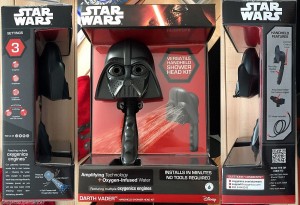 But along with all the promotional tie-ins, the marketing juggernaut is also working for the greater good.”Hour of Code,” the non-profit encouraging more people to take up programming, just became cooler thanks to a newly-announced collaboration with Star Wars and Minecraft. “Star Wars: Force for Change” describes itself as “a charitable initiative from Disney and Lucasfilm … dedicated to finding creative solutions to some of the world’s biggest challenges.”

Director J. J. Abrams recently shared a special thank-you video with fans, talking about their collaboration with Unicef to improve the lives of children around the world. Force for Change is also raising money by auctioning movie memorabilia on eBay — and raising awareness by enlisting Mark Hamill. He reminded fans that for a small donation to Omaze, they’d also get a chance to win tickets to the premiere of the new Star Wars movie. He did it by disguising himself as a Storm Trooper and walking down Hollywood Boulevard.

At least this is one stormtrooper that’s fighting for a good cause.

SHARE THIS STORY
RELATED STORIES
Entrepreneurship for Engineers: Avoiding Feature Bloat It Happened to Me: How I Suddenly Owed AWS $13,000... How to Get Started Filling 3.4 Million Cybersecurity Jobs Java's James Gosling on Fame, Freedom, Failure Modes and Fun Entrepreneurship for Engineers: Building for Customers’ Love
TNS owner Insight Partners is an investor in: Renegade.
SHARE THIS STORY
RELATED STORIES
A Leg-endary Year: Top 5 Internet Technology Stories of 2022 Golden Paths Start with a Shift Left How to Get Started Filling 3.4 Million Cybersecurity Jobs How Not to Waste a Senior Hire Why 'Explainable AI' Can Benefit Business
THE NEW STACK UPDATE A newsletter digest of the week’s most important stories & analyses.
The New stack does not sell your information or share it with unaffiliated third parties. By continuing, you agree to our Terms of Use and Privacy Policy.