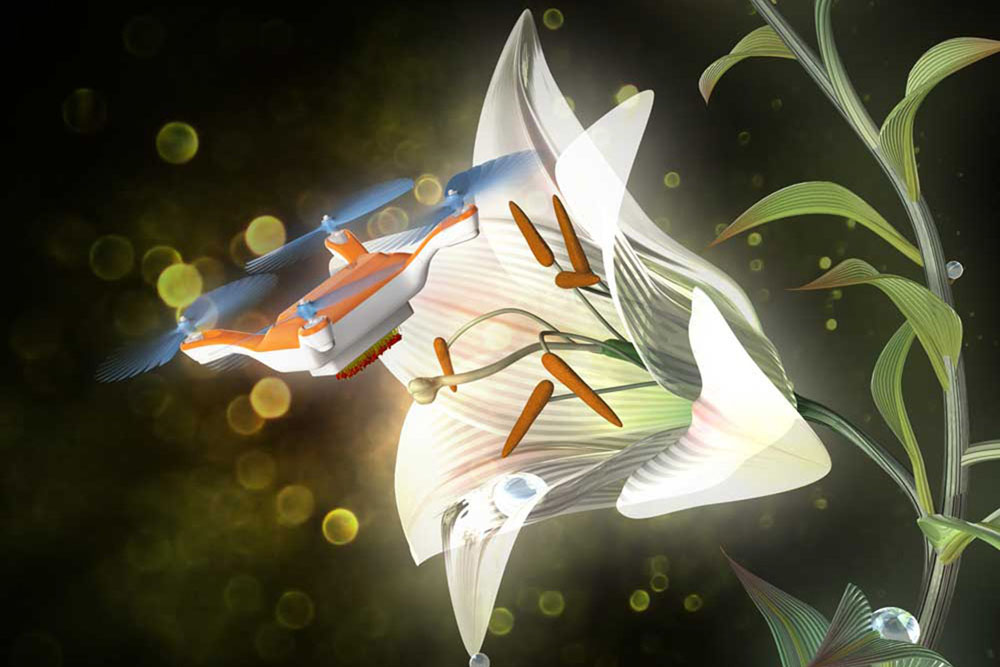 You might have heard that the bees appear to be in trouble, dying off in great numbers without explanation. It’s an unsettling phenomenon since bees — along with other pollinators like birds, bats, beetles, and butterflies — are responsible for pollinating at least 30 percent of the world’s crops and 90 percent of our wild plants. But now, a team of researchers has developed a backup solution: tiny, remote-controlled drones that can help pollinate plants, by transferring pollen between plants, much like how real bees would.

Created by researchers over from the National Institute of Advanced Industrial Science and Technology in Japan, this pollinating robot uses a readily available $100 plastic drone with four propellers. On the underside of the device is a small patch of horsehair, which allows this rob0-bee to gingerly picking up pollen from a plant, using a sticky ionic liquid gel that been spread on the hair. The idea is to mimic how pollen gets stuck on the bodies of insects when they visit flowering plants, which is then transported to cross-pollinate the next plant. 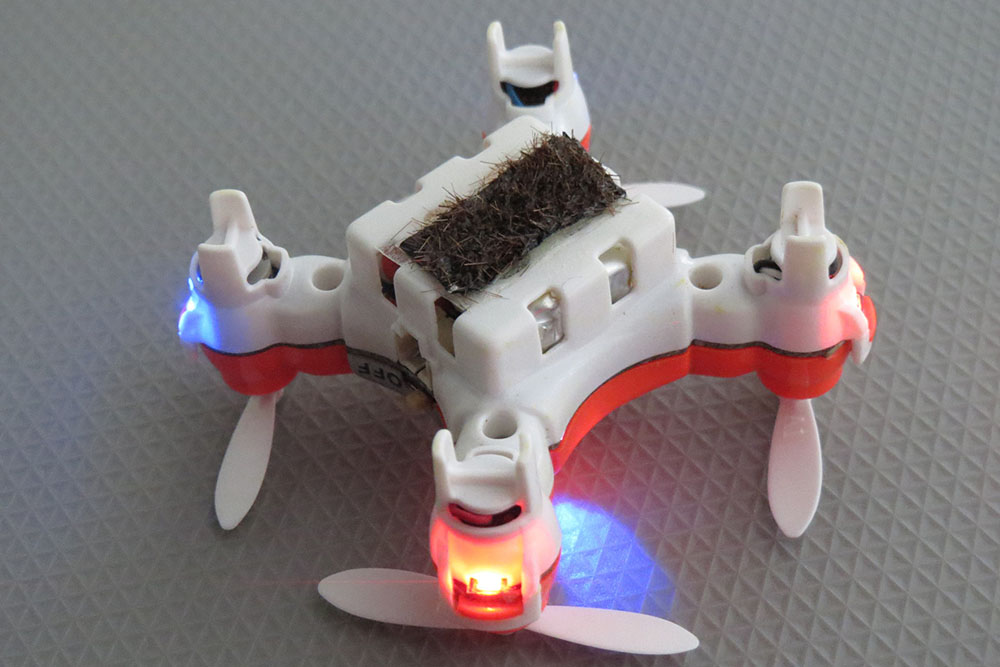 Pollination is a laborious task that bees and other pollinators are great at; for humans, it would be exceedingly time-intensive and expensive to do by hand. While there are a number of alternative pollination techniques that don’t require bees, this new device is also a big improvement over other kinds of artificial pollination, which also lack the lighter touch that’s needed to spread pollen without damaging a flower’s more delicate parts.

“One pollination technique requires the physical transfer of pollen with an artist’s brush or cotton swab from male to female flowers,” explained the authors of the study, published in Chem. “Unfortunately, this requires much time and effort. Another approach uses a spray machine, such as a gun barrel and pneumatic ejector. However, this machine pollination has a low pollination success rate because it is likely to cause severe denaturing of pollens and flower pistils as a result of strong mechanical contact as the pollens bursts out of the machine.”

The team’s prototype comes at a time when bees populations around the world are experiencing a drastic decline, thanks to the increased use of toxic pesticides, habitat loss, climate change and an uptick of apiarian diseases. According to the NRDC, in the United States alone over a quarter of the managed honeybee colonies have died since 1990, with the problem reaching such a global scale by the mid-2000s that experts had given the phenomenon its own name: colony collapse disorder. Without the bees, plants like food crops would very likely fail to thrive, resulting in worldwide food shortages, as well as major economic losses for agricultural industries.

Surprisingly, the one of the main components of this robotic bee — the ionic liquid gel (ILG) — was discovered completely by accident. One of the study’s authors, chemist Eijiro Miyako, was attempting to develop a ionic liquid (or salts in a liquid state) that could conduct electricity. Instead, his experiments led him to create a gel that was quite sticky, but failed on the conductivity front. The sample was shelved in storage in an uncapped container, and forgotten. Years later, it was rediscovered, and to Miyako’s astonishment, the gel was still in excellent condition, and remained sticky despite the long years in storage.

“This project is the result of serendipity,” Miyako told Phys.org. “We were surprised that after eight years, the ionic gel didn’t degrade and was still so viscous. Conventional gels are mainly made of water and can’t be used for a long time, so we decided to use this material for research.” 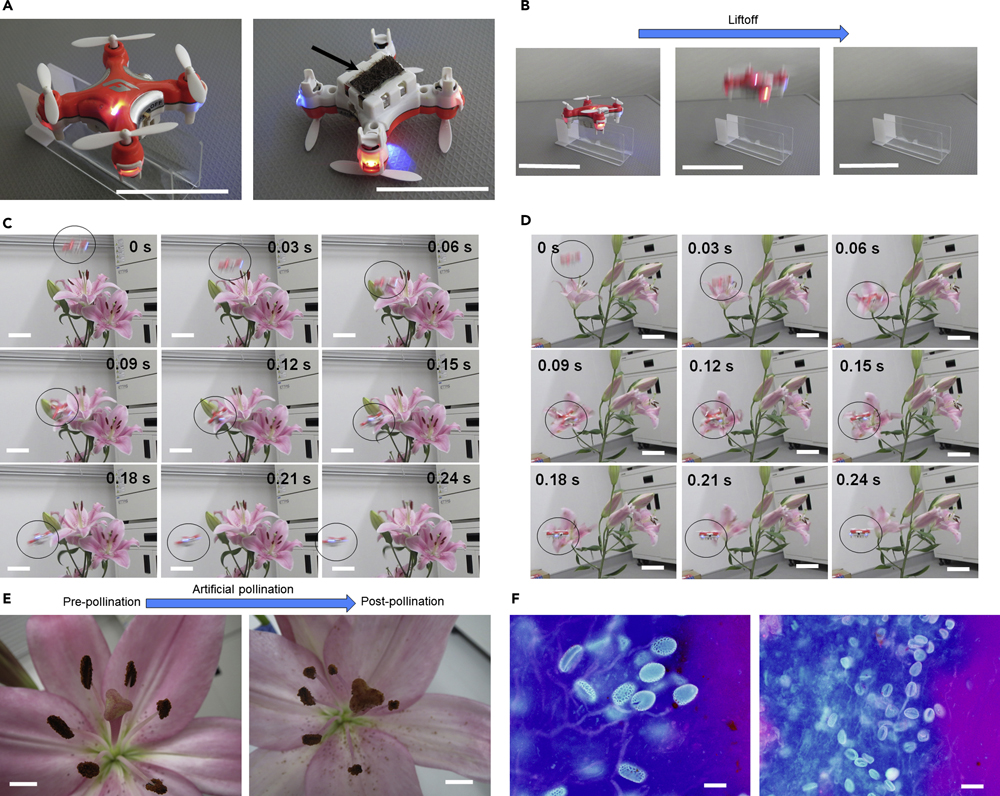 The everlasting ionic gel is what gives these otherwise conventional drones an edge in the task of pollination. As the team discovered, the prototype was able to pollinate Japanese lilies (Lilium japonicum) during their experiments. But this feat of artificial pollination took quite a bit of practice to achieve, meaning that remote-controlled swarms of robotic bee-drones might not be a feasible, scalable solution to the world’s growing bee crisis — at least, not yet. While the incorporation of artificial intelligence and GPS tools on each robo-bee would make them more autonomous and therefore easier to deploy, the scientists ultimately believe that these drones should assist bees, not replace them.