Typically when an open source software provider is having business difficulties or drops its open source project, the software itself is viewed as suspect by the enterprise, which looks for stability and long term support above all else. The newly launched Nextcloud, which is picking up the open source storage software from the struggling ownCloud, is hoping to buck this trend.

While Nextcloud itself is a very new company, formed last month, its story started in 2010 when Frank Karlitschek wrote the initial version of ownCloud to give organizations a better way to host their files and cloud services securely without needing to trust a third party with their data. The idea was to be able to store your files and other data in a cloud, not unlike Dropbox, but the difference is that it was open source, and it was designed from the beginning to be hosted on a company’s servers along with the rest of their infrastructure. The software built up a small but fervent user base, many were wary of the lock-in that comes with cloud-based storage providers such as AWS.

In April, Karlitschek announced that he was leaving ownCloud, the company that he co-founded in 2011 to support the ownCloud project. As chief technology officer of ownCloud, he had become increasingly frustrated with decisions that affected the open source project and the community, he said.

Over the following month, we saw a wave of additional departures from ownCloud, including Lukas Reschke, a security engineer; Jos Poortvliet, ownCloud community manager; Björn Schießle and Arthur Schiwon, both senior software engineers; Morris Jobke, developer; and others. Many of these people had been with ownCloud since nearly the beginning, so all of them leaving at once had to be more than a coincidence.

The departures began to make sense, and the pieces of the puzzle started coming together on June 2 when the formation of Nextcloud was announced. It was started by Karlitschek, who is a managing director of this new company, and he was joined by many of the key developers from ownCloud.

However, the most perplexing bit of news on may have been the statement made by ownCloud to address the issue of Karlitschek leaving and the formation of Nextcloud:

“Unfortunately, the announcement has consequences for ownCloud, Inc. based in Lexington, MA. Our main lenders in the US have canceled our credit. Following American law, we are forced to close the doors of ownCloud, Inc. with immediate effect and terminate the contracts of 8 employees. The ownCloud GmbH is not directly affected by this and the growth of the ownCloud Foundation will remain a key priority.”

One of several founders leaving a company to start a competing venture wouldn’t typically trigger the immediate shutdown of a company’s U.S. office. Rather, this seems to indicate some bigger issues within the company consistent with the number of people leaving ownCloud.

The ownCloud statement was immediately followed by a tweet from Karlitschek offering to hire the employees being let go from ownCloud, which isn’t particularly surprising since so many of the rest of the Nextcloud staff came from ownCloud.

Nextcloud GmbH has enough funding to hire everyone from ownCloud who is looking for a job.

While Nextcloud is based on a fork of the open source ownCloud project, there are some key differences. ownCloud has a Community Edition, which is open sourced under the AGPLv3 license, but the company also has an Enterprise Edition with additional features offered under a commercial license. This provides product features as a source of revenue in addition to the revenue from support subscriptions, which are available for both the enterprise and community editions.

Nextcloud, on the other hand, is completely open source with all of the revenue coming from services (support, consulting, etc.)

“The most important difference of Nextcloud compared to other solutions is its complete openness. We don’t require a contributor license agreement from contributors or partners,” Karlitschek said. “There will be no closed source code, and all the planning and development happens in the open.”

Nextcloud has a couple of big challenges ahead when it comes to successfully selling into the enterprise software market. Most companies want some assurance that the product they are adopting will be available and supported over the long-term. Companies don’t want to go through the hassle of adopting a new technology, rolling it out, and training a bunch of employees only the have the product disappear in a couple of years.

Karlitschek is confident that Nextcloud can provide this stability. 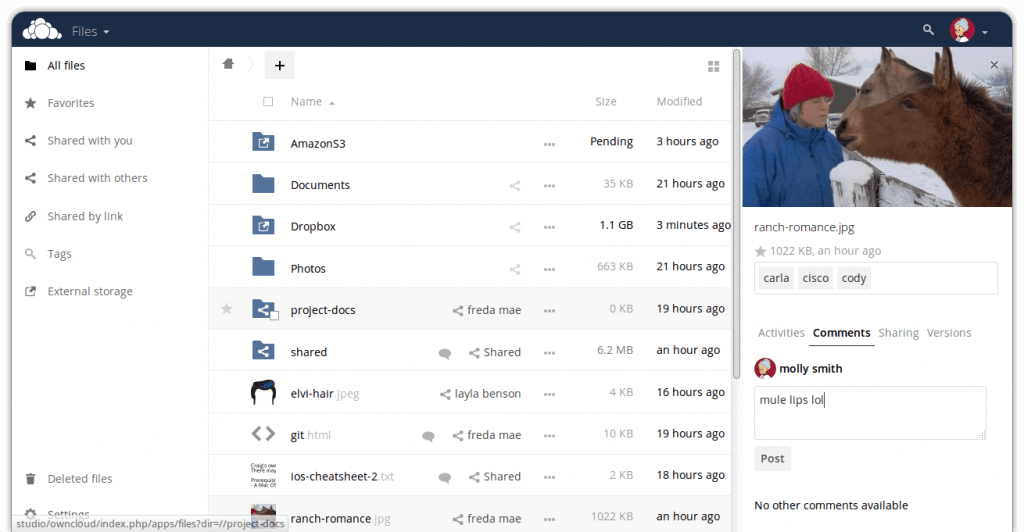 Because Nextcloud has been built on what was already mature code base, it is already stable for production use, Karlitschek asserted. “The Nextcloud team worked together for many years and is, in fact, the team that has built the technology in the first place,” he said, adding that the company also has the adequate financial stability to provide long-term support.

Not only does the company need to convince enterprise customers that it is a good bet for the years to come, but it also needs to convince companies to pay for services for a solution that is freely available as an open-source product. Also, it still needs to build out a services business, which is quite different from building a company around a product.

To this end, the company continues to hire new personnel, including Niels Mache as managing director, who has co-founded and built up Red Hat Germany.

Since ownCloud has commercially licensed enterprise features that are not in the open source project, Nextcloud is currently a bit behind from an enterprise product standpoint and having to catch up. Last week’s Nextcloud 9 updates were designed to begin to address these gaps with features targeted at enterprise customers.

Some of the new features that will be interesting for enterprise customers include:

In the Nextcloud 9 update post, they are already promising to deliver more capabilities in the coming weeks. The company is investing in building multiple authentication backends, including the Security Assertion Markup Language (SAML) and flexible two-factor authentication mechanisms, all of which will be made available as open source. Dawn Foster is a consultant at The Scale Factory in London and a PhD student at the University of Greenwich. She spent the past 20 years working at companies like Puppet Labs, Intel, Jive Software, and others. She has expertise...
Read more from Dawn Foster
SHARE THIS STORY
RELATED STORIES
Snowflake Delivers Bevy of Developer Goodies Retrospective: Why Was Cloud Foundry at KubeCon? Why Cloud Lock-In Is Getting Worse Amazon Web Services Gears Elastic Kubernetes Service for Batch Work Simplify Multicloud Security in 5 Steps
SHARE THIS STORY
RELATED STORIES
Zero Trust Security and the HashiCorp Cloud Platform Retrospective: Why Was Cloud Foundry at KubeCon? Pulumi Introduces One-Click Deployments The Internet Is Not Reliable, but Planning for It Can Save You Confidential Compute on Azure with Kubernetes
THE NEW STACK UPDATE A newsletter digest of the week’s most important stories & analyses.
The New stack does not sell your information or share it with unaffiliated third parties. By continuing, you agree to our Terms of Use and Privacy Policy.