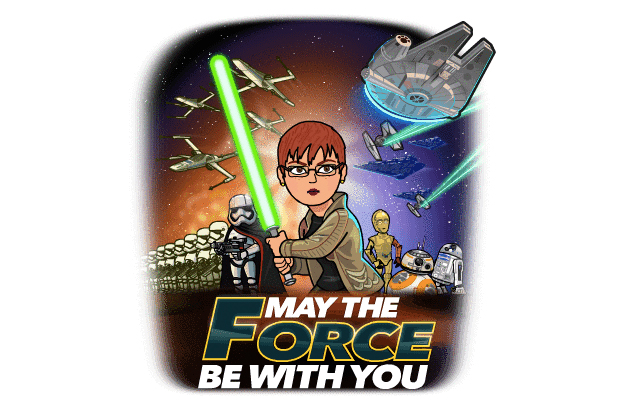 Why text emotionless letters when you can now send a lively avatar of yourself? Running late? Text your avatar racing forward, legs pinwheeling over a cloud of dust. TMI? Send your avatar with ears covered.  Done with the topic? Why type *drops mic* when you can do as Patrick Stewart does, and post a caricature of himself literally dropping the mic? 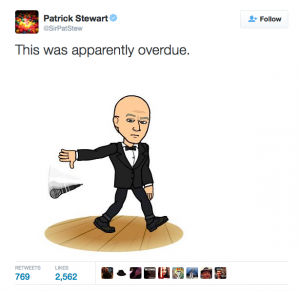 Welcome to the world of Bitmojis, where your cartoon proxy can say it all for you, sometimes with more grace and humor, or, at least, efficiency, than text itself.

“Texting is making conversation more convenient than ever, but it’s also stripped away a lot of the things that make communication human. We think one of the most important things that’s still missing is identity. If you think about history, 99 percent of human communication has been face-to-face.”

In researching this article, I created my own Bitmoji, and yeah, I’m hooked. Gotta say, seeing your personal avatar wielding a light saber totally rocks.

People can become strongly attached to their Bitmojis, identifying with them fairly quickly. As Blackstock told Shira Lazar:

“… so you have your expression, your emotion, your body language, and your identity and all that is missing from texts…and this [Bitmoji] is letting people express themselves in ways that words alone can’t capture, and we think this is revolutionary.”

Blackstock then revealed Lazar’s Bitmoji, and she went from skeptic to fan in three sentences:

Then Lazar looked up, surprised, “I feel a connection with this Bitmoji.” 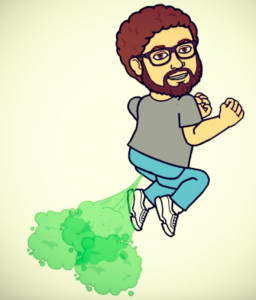 “That’s just it,” Blackstock replied triumphantly. “Your Bitmoji is an extension of yourself – it’s like your personae in the digital world.”

It’s this emotional connection to the avatar that seems to account for the explosion of Bitmojis, which are quickly being adopted by everybody, even by Hollywood elite. Seth Rogan, Patrick Stewart, Victoria Beckham, Laura Dunham and Zach Braff have all been using Bitmojis.

Bitmojis are bringing in some major coin. According to TechCrunch, Bitstrips, launched in 2007, closed an $8 million Series B funding round from Horizons Ventures and Kleiner Perkins Caufield & Byers in 2014. The company is using the money to expand its 23-person staff and product development. Launched in November 2014, Bitmojis has already garnered media attention from the New York Times, The Nerdist, Fast Company, Time, Fortune, smallbiztrends.com, and of course, the Huffington Post.

Available on Android and iOS, creating your avatar is absurdly simple. The app walks you through a series of choices, starting with man or woman. You then choose your shapes, colors and styles for facial details, hair, eyes, and build. You can pick wild colors like purple and green for facial tones and some crazy hair styles, allowing you to create monster avatars if you roll that way. Men get choices for facial hair that I was not offered, but I’m not sure if they get the choices for makeup and chest 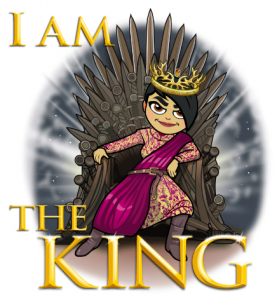 size that I was offered.

You save this avatar, then choose an outfit. Boom. Done. Your personal avatar is then inserted into Bitmojis, which are essentially cartoon panels of text messages. When finished, you can add your Bitmojis to your phone texts, Slack chats, or wherever your cartoon stand-in can express.

In addition to the standard texts, Bitmojis are available in a wide range of hip topics. There are Bitmojis for “Hangry,” “Mind Blown,” “Muahahaha,” “That Sucks,” and cartoons of Godzilla stamping a tiny skyscraper, or Bitmojis taking a crap, to mention just a few of the hundreds available.

The Bitmoji app comes installed with several packs in addition to the standard text choices including “Game of Thrones” (Winter is Coming, You Know Nothing, Valar Morgulis), “Terminator” (“I’ll be…” you know), and “Star Wars.” Other packs can be purchased for $.99.

The company releases Bitmojis every week. Part of the appeal is the ability of the company to produce new Bitmojis in short time frame (less than 24 hours in some cases) enabling them to keep up with trends. For example, the infamous Kardashian dress and the Left Shark from Katy Perry’s Super Bowl performance made a Bitmoji appearances earlier this year, showing up in time for people to use them while the topic was still trending, keeping on the pulse of popular culture.

Earlier this year, Bitmojis teamed up with People Magazine to create the #SexiestBitmojiAlive, allowing you to put your avatar on the cover of a Bitmoji People magazine prior to the reveal of People’s Sexiest Man Alive.