Study: DNA-Based Computers Could Be Built With Shampoo Ingredient 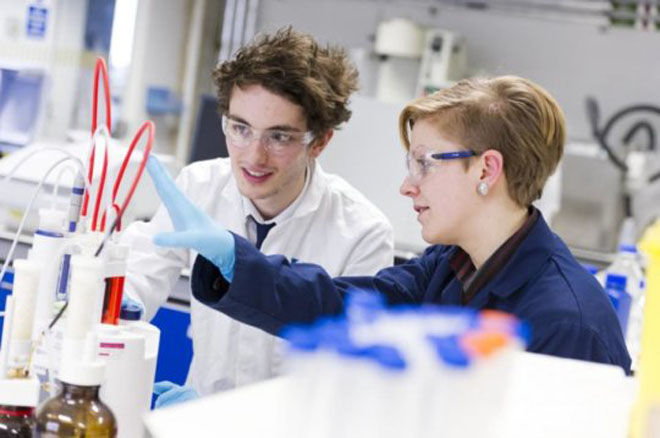 We are now quickly reaching the limits of silicon-based computing, with many observers predicting that the rate of silicon-based semiconductor development will soon slow down in the next decade, heralding the end of Moore’s Law and ushering in a “post-silicon era.”

Alternatives like quantum computing and computers based on molecules like DNA have been proposed, but there are significant challenges and it’s still too early to say what exactly will replace silicon-based hardware. But scientists at the University of East Anglia (UEA) recently gave a boost toward DNA computers, thanks to their discovery that the structure of DNA could be “switched” multiple times using copper salts and Ethylenediamine-tetraacetic acid (EDTA), a water-soluble solid and a common ingredient in shampoos. The discovery could have profound impacts on nanotechnology and DNA-based computing.

The study, which was recently published in “Chemical Communications,” details how the researchers were able to change the shape of a DNA strand into various shapes, using copper salts and EDTA. The findings build upon previous experiments showing that when acid is added, the helix structure of DNA strands can transform into a curled up “i-motif,” which can be reversed when an alkaline agent is used.

This time around, the UEA experiment demonstrated that yet another transformation was possible. By applying positively-charged copper salts (also called copper cations), the “i-motif” DNA morphs into a hairpin shape.

To reverse this transformation into a hairpin configuration, EDTA is used to “mop up” the copper cations, and voilà, back to the former “i-motif” shape.

Changing the shape of DNA might not seem like a big deal, but lead researcher Dr. Zoë Waller explains the significance of the findings:

“Our research shows how the structure of our genetic material — DNA — can be changed and used in a way we didn’t realize. A single switch was possible before — but we show for the first time how the structure can be switched twice. A potential application of this finding could be to create logic gates for DNA-based computing. Logic gates are an elementary building block of digital circuits — used in computers and other electronic equipment. They are traditionally made using diodes or transistors which act as electronic switches. This research expands how DNA could be used as a switching mechanism for a logic gate in DNA-based computing or in nanotechnology.”

With the post-silicon age looming ahead, genetically-based logic gates would be part of synthetic biological circuits consisting of DNA-based components like transcriptors and DNA digital data storage — all of which can be put together to create a biological computer. Scientists are now pushing the conventional idea of the computer as the sum of mechanical parts: in a biological computer, a transcriptor is a transistor-like device made of DNA and RNA instead of silicon, while DNA-based digital storage would involve storing digital data in the base sequence of DNA.

As one might intuit from the longevity of data that is extractable from even fossilized DNA, information stored in DNA can be kept intact for hundreds, if not thousands of years. On top of that, DNA has an incredible storage capacity, with a gram of DNA capable of storing an estimated 455 exabytes of data (one exabyte is equal to a billion gigabytes). But with response times that are measured in minutes, hours and even days, the computing speed of biological computers is much slower than their silicon counterparts. Nevertheless, they would be cheaper to build than silicon-based machines, and the very nature of DNA allows these biocomputers to perform many multiple calculations in parallel than current computers.

Despite the hurdles of processing speed and the problem of how to actually mass manufacture these cheap biological computers, the possibilities of DNA-based computers are pretty mind-boggling. For one, we might someday be able to create nanoscaled biocomputers that can be injected into the body, and which can go inside cells and cure diseases at the cellular level. Could biocomputers perhaps permanently inhabit a human body someday, creating a biologically enhanced super-hybrid human who would be immune to disease and who could heal from the inside out? We won’t know for now, but it’s certain with surprising findings like these, the future for DNA-based computers looks brighter. Read more over at University of East Anglia and “Chemical Communications.”