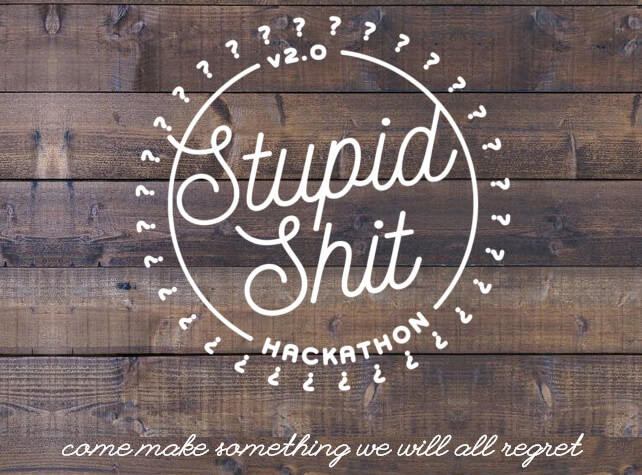 San Francisco will soon be hosting another hackathon: The “Stupid Shit No One Needs and Terrible Ideas Hackathon.” It’s part of a new trend of light-heartedly unambitious coding events, and maybe also an implicit critique of all the other hackathons, with their rah-rah rhetoric and corporate sponsors.

But in a strange development, these anti-hackathon hackathons seem to be gaining in popularity.

San Francisco’s free event will be held on the weekend of May 14th, at a makerspace called Noisebridge, and it’s technically already version 2.0 of the event, since another one was held in 2015. But it’s also just the west coast version of a New York City event, according to their website, which reports that there’s also stupid hackathons coming up in Toronto and Berlin. And they apparently have some competition, judging by a recent essay on Medium which described a one-day “TerribleHack” event in Waterloo, Canada with over 100 hackers participating.

“Most hackathons are about coming up with innovative new ideas and making plausible startup prototypes,” wrote one of that event’s organizers in 2015. “This one is different. This one is about having fun and programming for the sake of programming, even if it means reinventing a less efficient wheel.” Instead of being practical, it looks like most of the attendees were just out to have some fun. In 2015, one of their participants even found a way to display Rick Astley’s rick-rolling video in black-and-white on a Pebble smartwatch.

Meanwhile, last year’s stupid projects at the San Francisco hackathon included a new way to read any book on your smartphone — by taping that book onto your phone. A developer named Will Doenlen actually installed a zipper in a banana peel. There was also an air horn jerry-rigged to go off anytime somebody tweeted the hashtag #disrupt. One team even invented an UNbrella that pours water, “a great way to make sure you can stay wet in sunshine.” And since that hackathon, one webmaster has racked up nearly 57,000 page views for his own stupid project, a website called DoesMyScreenWork.com. It displays the word “Yes” over a fluorescent green background — which, of course, will only be visible if your screen does, in fact, work…

The event was followed by beers at a local bar named Zeitgeist.

So who were these bravely stupid developers? There’s a hint at the bottom of the page. “We’re not a centralized organization, just a group of friends in San Francisco who were appalled it didn’t already have a Stupid Hackathon. You’re welcome to steal the idea for your city.”

But one thing they seem to take seriously is the spirit of the event. “I have often chastised people for coming up with ideas that were too useful,” organizer Noah Swartz told the Daily Dot. The technology site published an affectionate write-up of the 2015 event, applauding it for highlighting San Francisco’s Maker community, “a culture in the Bay Area that’s often overlooked in criticisms of the tech community… all of whom were open to sharing new ideas and teaching others what it’s like to build something from scratch. ”

The implicit context, of course, is all those other high-minded hackathons which may be experiencing an unexpected backlash. In December Fast Company ran an article headlined “Why Hackathons are Bad For Innovation” arguing they create a false sense of success, tackling stripped-down challenges that are “willfully divorced from reality.”

In 2013 engineer Chinmay Pendharkar wrote a blog post making another point: that hackathons are bad for your health. He criticized them for their encouragement of sleep deprivation mixed with “junk food, booze and caffeine.” These complaints echoed in another blogger’s rant this February called “Hackathon Be Gone” and an Australian blogger added his critique, titled “No, I will not build your app for free pizza.” And last September a Berkeley student published a thoughtful essay arguing that hackathons are contrary to longstanding tenets of hacker culture, writing “We’ve sold each other for profit and lost what makes us happy.” 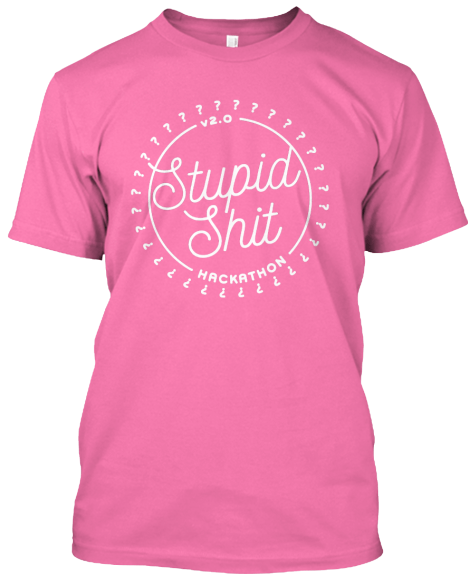 It’s impossible to ignore the juxtaposition. The New York event has been running since at least 2014, an event which one organizer described later as “a hackathon that asks participants to produce projects that have no value whatsoever. (“It was a resounding and unqualified success.”) Some examples from that 2014 event include Needybot, “a robot that cries when you aren’t soothing it,” and “Kim Kardashian On A Newton,” a black-and-white photo of Kim Kardashian displayed on…well, you get the idea.