Sun Microsystems: A Look Back at a Tech Company Ahead of its Time

A look back at the history of Sun MIcrosystems, with its CEO Scott McNealy.
Oct 13th, 2019 6:00am by David Cassel 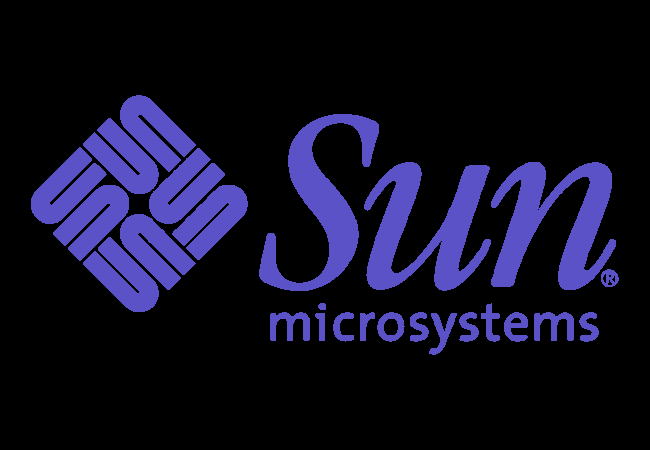 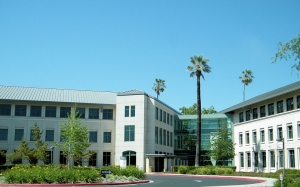 Sun Microsystems is a Silicon Valley legend. Ten years after it was acquired by Oracle, the company’s past employees still have fond feelings for their former home — and a historic reunion happened two weeks ago at the Hyatt Regency by the San Francisco airport. Over 1,000 former Sun employees reunited for an evening to re-connect and to reminisce.

“It was really fun,” former Sun CEO and co-founder Scott McNealy told us with a laugh. “I don’t know, there’s something crazy about the team we put together and the culture. Everybody had a fun attitude, and when people got together…”

The days that followed found Sun employees sharing nostalgic memories online and expressing their feelings of geek camaraderie, both past and present. But the reunion also offered a chance for Scott McNealy, along with everybody else, to reflect on what it all had meant. And how do you measure the legacy that a technology company — and its workers — are leaving behind?

‘A Bigger Impact Than We Realized’

So how was the reunion? “It was actually kind of weird,” McNealy told us. “I felt like it was some sort of rock concert where everybody was a celebrity to everybody else. People were just laughing, having a great time catching up, reminiscing, remembering. It’s sort of like you’d expect a reunion to be, only better.” 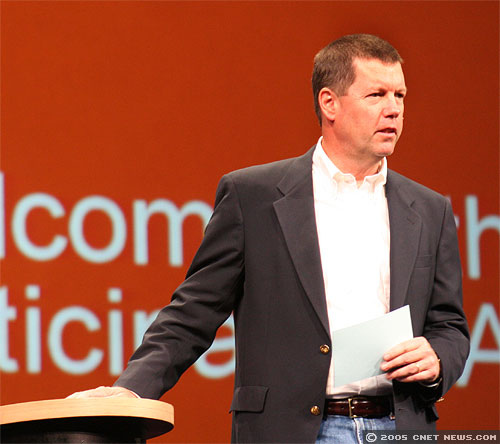 The event’s official website notes that over 150 senior executives attended, and “The attendee list included people from all years of Sun’s existence, from employee #1 to some of the last pre-Oracle hires.”

McNealy jokes that when he got married there were only 400 people at the wedding, and even then he’d worried about meeting everybody. But after taking lots of selfies, “Fortunately they gave me the microphone and I got a chance to talk a bit about what we did and what it meant to me and the industry…”

But before the formal event, there was also a kind of “summit” where the four original co-founders met with the press, according to InfoWorld. Bill Joy, Andreas Bechtolsheim, and Vinod Khosla sat with Scott McNealy for what he describes as one of the memorable moments of the night — “to hear everybody’s perspectives… Sometimes you need to get a little distance to really understand what’s going on.”

“Looking back now you can see who really did have an impact and change things,” McNealy told us. He cites the example of Adam Osborne. While Osborne’s company sold the first commercially successful portable computers back in 1981, it went bankrupt within 29 months. “Adam Osborne was very famous back then, but he didn’t impact the industry. There are many others that are just footnotes in the industry.

“I don’t think anybody thinks SPARC, Solaris, Java, the network as virtual computer, virtualization, all of the kind of things we did at Sun — are footnotes. They’re bedrocks. So I think it was fun to actually get together and look back and say ‘Yeah, we probably had a bigger impact than we realized at the time.'”

Hanging out with the founders of Sun Microsystems, an amazing company that gave a lot to tech. pic.twitter.com/0g1umEdYYb

McNealy remains proud of everything Sun accomplished, and later in the evening shared some of his feelings with his former employees. “I remember standing up and saying, ‘You know, they’re all doing this diversity and inclusion thing. We did it 30 years ago without even thinking about it. That wasn’t the goal, we just were inclusive and diverse…

“And then I said, the other thing is we did all of this crazy innovation. We were light years ahead of our time. Sun was always way too early, whether it was doing cloud computing or open source or whatever. We were way ahead of our time, too far ahead of our time, because of the brilliant people we had that could look over the horizon…”

InfoWorld reported that before the formal event, Bill Joy said mobile data networks had now transformed society, which got him remembering specific times when Sun had made early attempts at technologies that others later perfected. The site credited Sun with “a range of open source software technologies still popular today,” including the Java programming language and the Jenkins CI/CD platform. Sun had tried both natural language processing and, with Java ME, even programmable smartphones. “But the hardware was just really nascent at the time,” Joy said.

And McNealy remembered how Sun had shared the Network File System (NFS) protocol for storing and retrieving files over a network, back in 1984. InfoWorld quotes him as saying “We didn’t invent open source but we [made it] happen. We were the leader of that parade.”

The event also featured a thoughtful attempt to pass on some of that expertise, according to the reunion’s official site. “We used this rare opportunity to pay it forward by sharing the expertise of some of our most knowledgeable alumni with the next generation of entrepreneurs.” The Sun Reunion committee invited 100 MBA candidates from five local universities to hear a series of 20-minute “SunTalks” covering the future of education, work, technology, money, innovation, and thought. (“Special guest” speaker James Gosling, identified as “the father of Java,” handled “the future of innovation.”) The talks were followed by a 20-minute Q&A session.

And the reunion also featured another panel titled “Celebrating Success: Outstanding Women@Sun,” featuring “women who built on their experience at Sun to go on and have great accomplishments in the industry.” Panelists included:

And all of the reunion’s events were organized on Facebook, with a team of nearly two dozen former employees volunteering to help make it happen.

What You Always Remember

McNealy still remembers the heartfelt memo he’d sent on the eve of Sun’s acquisition by Oracle. The memo’s subject line was “Thanks for a great 28 years.” In the emotional good-bye, McNealy had remembered how they’d made it into the Fortune 200 while generating over $200 billion in revenue over the years, writing that Sun “innovated like crazy… And though we did not monetize our inventions as well as we could have, few companies have the track record in R&D that we had over the last 28 years.”

And nine years later, he paraphrases what he’d written in that memo. “One of the biggest thrills was to be able to accomplish all that we accomplished without worrying about being embarrassed when my son read the newspaper the next morning. We broke the rules of business without breaking the law. We changed business in a big-time way, and we did it ethically, honestly, in an open and diverse and inclusive way.”

So what’s the feeling now? “I think a lot of us are very — not remorseful or sad, but just — I think we all feel very blessed to have been at a magical moment with the company…”

Steve Evans, a Sun engineer who was there for the company’s first 13 years, from 1982 until 1995, created a poignant exhibit for the reunion. He took a low-resolution LED panel from his recent Burning Man art project, then used it to commemorate some iconic images from Sun’s first 10 years.

As to the feeling at the reunion, Evans seems to have found a sense of continuity. “Most of the folks I talked to were old co-workers and most were still working at Oracle in the Java group. Gosling had worked as part of my team for much of the time before the development of Java. I believe that those that stayed and continued after the Oracle deal enjoy being part of this successful and historically significant technology, and enjoy working with James, even if indirectly.”

There’s also something about a reunion that raises the question: whatever happened to those people who moved on to other companies? A page on the Sun Reunion site features the logos of companies where former Sun employees ended up. It includes major tech companies like Google, Amazon, Facebook, Netflix, as well as enterprise heavyweights like IBM and Hewlett Packard, and big-name internet companies like Yahoo, eBay, Twitter, and Slack. There are cloud companies like Docker, Joyent, and Cloudera, disruptive transportation companies like Uber, Lyft, and Tesla, major consumer technology companies like Dell, Lenovo, Ericsson, and several Linux vendors (including Red Hat and Canonical). And of course, Oracle.

And there’s also a second page for new companies founded by Sun alumni. Mixed in with cloud companies like Cloudera and CloudBees, there’s a logo for Nvidia — whose 1993 co-founders included two former Sun engineers.

In 1992 Sun even gave future Microsoft CEO Satya Nadella one of his jobs in the world of tech — and that’s just one example of what McNealy described as “a stunning genealogy” of Sun employees moving on to other parts of the technology world. “We added it up at one point many years ago and found that there were a couple hundred minimum of former Sun employees who became CEOs. There’s just been unbelievable numbers and companies that have gotten started as a result of Sun. ” 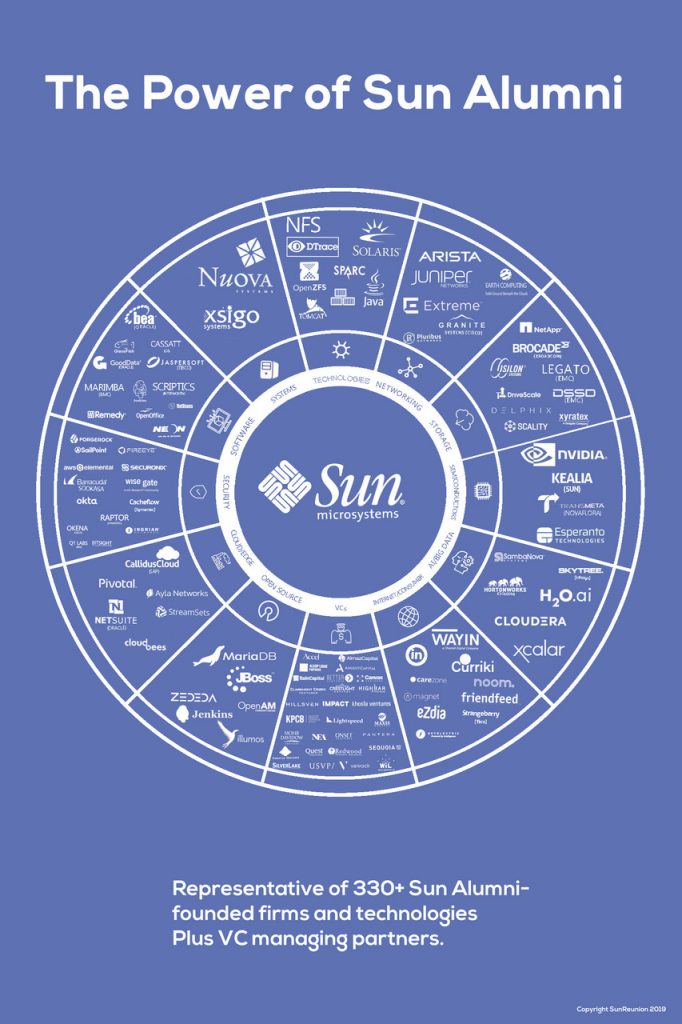 McNealy also shared one of the most underappreciated secrets of Sun’s success. “I probably used HR more heavily, and I’m guessing more effectively than most companies, which is why you saw what you see at that reunion — the culture and the way people felt treated… I think sometimes people forget that a major asset in a tech company is the people. It’s not the brands. Brands have the shelf life of a banana…”

Here in 2019, “I didn’t see anybody who wasn’t thrilled,” McNealy said of the event. “The only sad part was the little poster board where they had all the people who are no longer with us.” The Sun Reunion site has reproduced that poster board on a special “In Memoriam” page — and after its 300 names, a footnote remembers former vice president Phil Rosenzweig, who’d been a passenger on one of the airplanes which hit the World Trade Center on Sept. 11, 2001. The list stretches back into the 1980s, “All the way back to our first CFO Bob Smith, who died at his desk when we were a really young company,” McNealy says. “And a lot of others. That’s tough.

“You sit there and you look and understand that good things do come to an end.”

But maybe that was one more reason to gather together and celebrate the vibrant community of former Sun Microsystems employees. “It was a big love-in. It was Woodstock…” McNealy says. “I guess it went on until 4:30 in the morning. That’s not unusual….”

And what’s McNealy up to these days? “I’m living the dream. I still am and I wouldn’t change a thing,” he told us this week.

And then he added, “Well, I would’ve changed a couple decisions I made, but I don’t fault myself… I think we made more good decisions than most companies did,” he said.