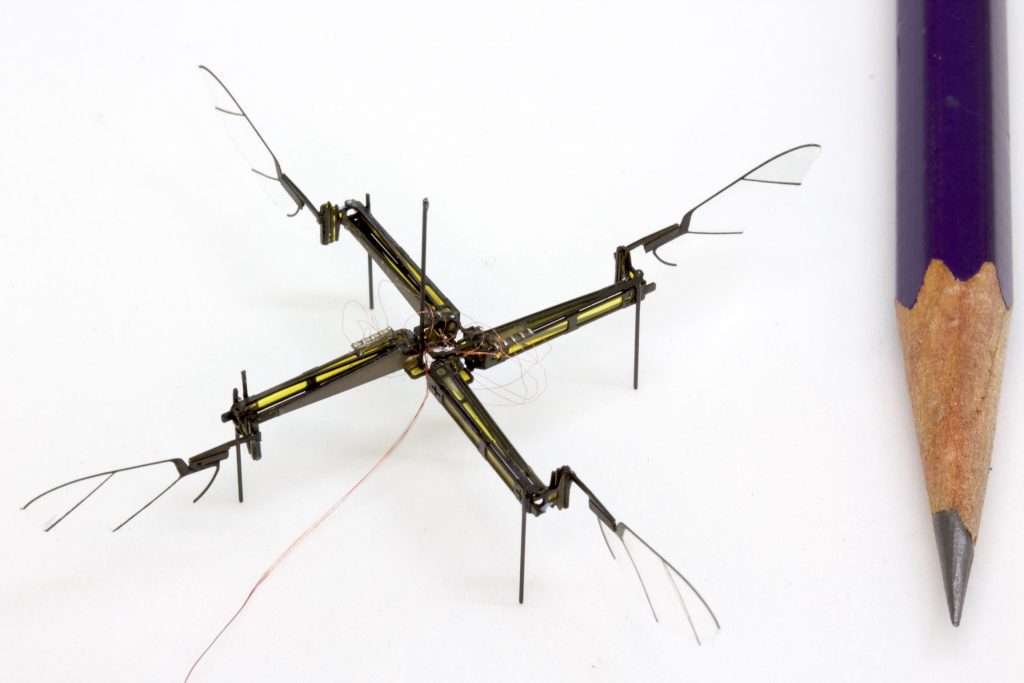 While larger robots might have their place assembling things in factories or serving up cocktails in airports, smaller robots can perform many tasks that their larger brethren can’t, such as microfabrication, inspecting buildings from the air, and even delivering drugs inside the human body.

But smaller robots do have their drawbacks. For starters, they obviously can’t carry much of a payload, and if they are designed to fly autonomously without being tethered, the trade-off between maneuverability and powering them sufficiently can be a challenge. After all, the larger the battery, the more difficult it will be to get the bot off the ground, creating a bit of a Catch-22. In addition, these smaller robots can be difficult to steer. Microrobots such as Harvard University’s RoboBee, which first made its appearance back in 2013, illustrate these engineering dilemmas well.

The solution, however, may be more simple than you think. As new research from the University of Washington is suggesting, it may be as easy as adding on two extra wings onto insectoid robots, providing them with more capabilities than prior two-winged versions. According to the research paper, published in April’s issue of IEEE Robotics and Automation Letters, these new capabilities include being able to steer around a vertical axis, increasing payload capacity so that these bots can carry extra power systems and sensors, while also making untethered and fully autonomous flight possible (this was not the case with the RoboBee, which had to be controlled and powered via a wired connection). Take a look:

As the paper details, this four-winged, insect-like, aerial robot would weigh a bit more than a real honeybee — about 143 milligrams. Like the RoboBee, this robot’s wings use piezoelectric actuators to move them back and forth. The wings are arranged in a perpendicular fashion, and it’s in varying how far and how fast each individual wing will flap that will translate to variations in the microbot’s angles of rotation in its x-, y- and z-axes (or respectively in terms of flight dynamics, its roll, pitch and yaw). Preliminary tests with assistance from motion-capture feedback cameras suggest that this robot might also be able to passively hover in mid-air. 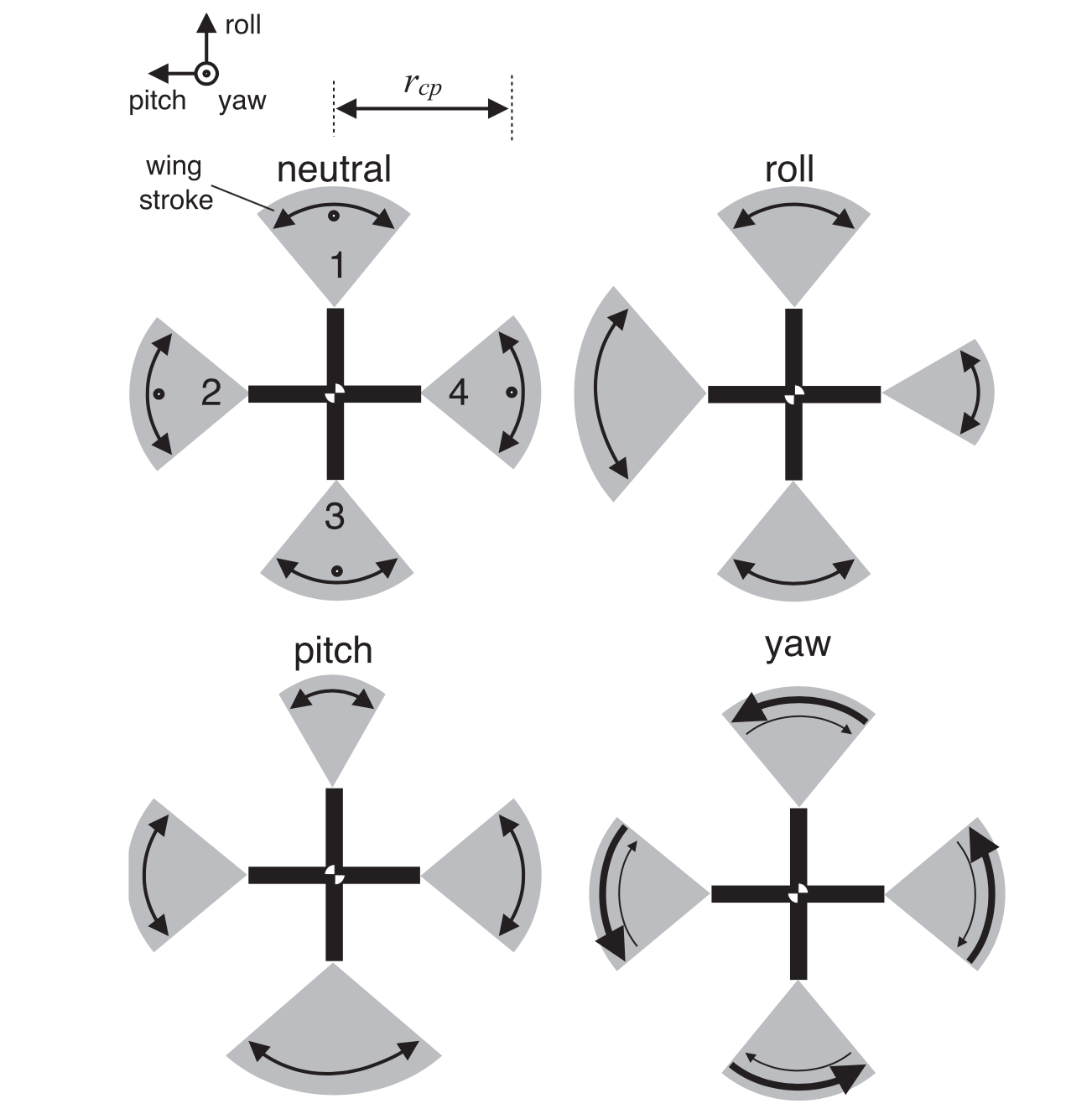 The four-winged robot controls its roll (x-axis) and pitch (y-axis) by adjusting how far its wings flap on opposing sides. To steer itself (ie. modify its yaw or z-axis or), the bot adjusts how fast one wing beats relative to the others.

“This new design can steer itself, and the reason it can is that the wings have been moved farther away from the center of mass so that they have a longer moment arm, for greater torque,” explained Sawyer Buckminster Fuller, professor and director of University of Washington’s Autonomous Insect Robotics Laboratory in an interview with IEEE Spectrum. “The way this robot steers is similar to how a quadrotor does, which is to spin the two props that are spinning in one direction faster than the other two. But instead of changing the rotor speed, we actually change the speed of the flapping motion in one direction compared to the other. When the wing moves faster, the drag is higher, causing a force. The problem is that the force is very small, so we had to move the wing farther out to overcome [wind] disturbances.”

With its two additional wings, the bot is able to achieve liftoff, plus an extra 262 milligrams of weight. It doesn’t seem like a lot, but as the study explains, this small gain in payload capacity would mean that the robot could either be completely untethered in terms of its sensing capabilities, or in terms of power (though in this current stage of development, not both). For the bot to be autonomously sensing things on its own, it would need to carry a sensor package consisting of a gyroscope, an accelerometer, an optic-flow sensor, a laser rangefinder, and a microcontroller. On the other hand, if the device were to carry its own independent power source, it would need at least a microcontroller, a boost converter and several supercapacitors, each of which can store 10 to 100 times more power than conventional options.

Currently, these components are not yet small and light enough for this version of the microbot to include so that it can both fly and sense without depending on either a tethered power connection or motion-capture feedback of some sort. But hardware is constantly getting smaller and more efficient, and once these limitations are overcome, such insect-shaped micromachines will not only be able to fly and sense their environment autonomously, they might also be able to jump, walk or climb — perhaps as cooperative groups using swarm intelligence.