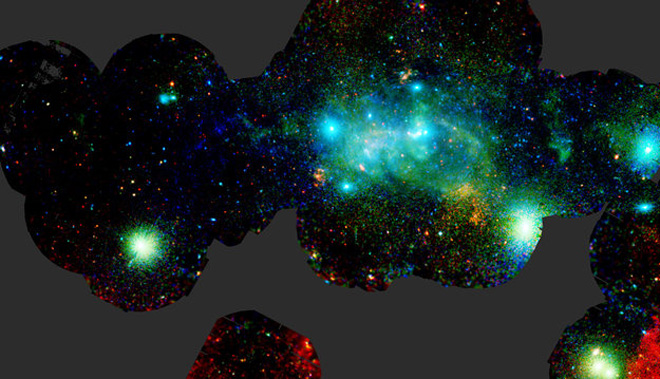 You might have seen our galaxy as a shimmering spill of stars on a clear, moonless night, but have you ever wondered what the center of the Milky Way galaxy is like? With the help of a space telescope with x-ray vision, scientists at the European Space Agency (ESA) recently released these images depicting our Galactic Center as a violent place, buffeted by powerful stellar winds and disruptive supernovae. Yet, it’s also populated with clusters of young stars — seen as red and white specks in these images — a birthing place where new stars emerge.

The ESA’s XMM-Newton (“X-ray Multi-Mirror Mission”) space satellite and telescope is outfitted with 170 highly nested, ultra-thin cylindrical mirrors that can capture the faintest x-rays emitted by distant celestial objects. Since Earth’s atmosphere blocks out all x-rays, a telescope orbiting out in space is needed for these kinds of observations.

The XMM-Newton is revealing what our eyes can’t see at the galaxy’s center: remnants of dead stars, neutron stars, black holes and clouds of gas, dust and plasma, all leaving x-ray trails that are being picked up by the telescope. There is no on-board storage on the satellite itself; all data is transferred back to the ground station in real time and analyzed using spectroscopy, in order to understand the source’s chemical composition, temperature and velocity.

These incredible images show there’s a lot of extreme forces at work here, and right at the heart of it all, is a supermassive black hole, which is leading some scientists to surmise that supermassive black holes may be a universal feature to all galaxies. In addition to the forces generated by supernovae and young star formation, the ESA researchers explain some of the other causes of this tumultuous environment at the center of the galaxy:

The supermassive black hole sitting at the center of the Galaxy is also responsible for some of this action. Known as Sagittarius A*, this black hole has a mass a few million times that of our sun, and it is located within the bright, fuzzy source to the right of the image center.

While black holes themselves do not emit light, their immense gravitational pull draws in the surrounding matter that, in the process, emits light at many wavelengths, most notably x-rays.

In addition to detecting these celestial features, scientists also found the x-ray signatures of heavy elements such as silicon, sulphur and argon, color-coded in the image below, all of which are generated during the death of a star.

The Galactic Center seen through the emission of heavy elements

This discovery is leading astrophysicists like Dr. Andrea Ghez to question the old theory that only old stars can be found around supermassive black holes: “We’ve also learned that the idea that a supermassive black hole should be surrounded by a very dense concentration of very old stars is not true. And that prediction is often used in other galaxies to find their black holes, because we can’t do the kinds of experiments we’ve done at the center of our own — that you look for this concentration of light. But in our galaxy we’re not seeing that, so you have a case where’s there’s absolutely clearly a supermassive black hole, yet you don’t see this collection of old stars. That’s a puzzle.”

Another interesting discovery is the faint traces of “warm plasma” being registered in the upper and lower portions of the image. Researchers are speculating that these emissions may be “macroscopic outflows” spawned by star formation, or perhaps the vestiges of once-violent activity of Sagittarius A*.

Thanks to this orbiting x-ray-detecting telescope, we have been able to build the largest catalog of cosmic x-ray emitting objects during the last 15 years. Yet, there’s still plenty of mysteries and questions out there to ponder, and as we peer straight into the heart of our own galaxy, we’re also going to get better idea of the origins of the universe. Read the rest of the findings over at ESA.