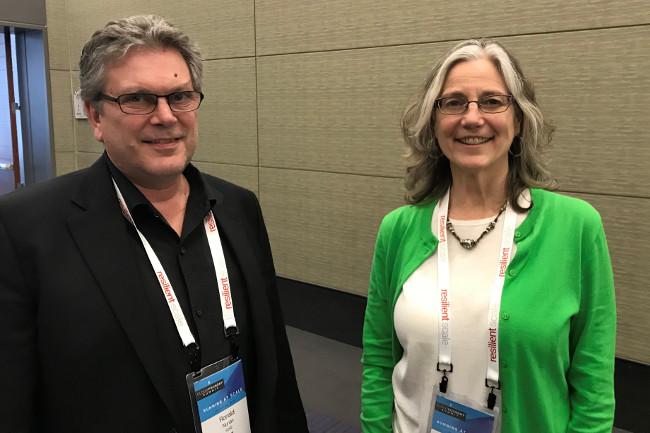 Enterprise Linux distributor SUSE has bundled the Cloud Foundry platform-as-a-service software with the Kubernetes container orchestration engine, with the aim of providing an integrated package of open source software to help enterprises to a cloud-native architecture.

“We want to bring advanced productivity of Cloud Foundry to a modern infrastructure represented by Kubernetes,” said Jennifer Kotzen, SUSE senior product marketing manager. “We’re pulling these two platforms together. We’re not just putting them in a box together, but we are integrating them in a way that allows people to get the best of both worlds.”

Enterprises have been investigating both Kubernetes and Cloud Foundry, and have found that “neither one covers the full gamut of what they need,” Kotzen said. As a PaaS, Cloud Foundry is easy to use but limited. Putting all apps on Kubernetes may take considerable amounts of expertise, though. The idea with this package is to provide an environment where coders can develop apps quickly while IT operations can remain flexible as possible.

Of these eight certified releases, six are managed services, Kotzen noted. Until this release, only Pivotal offers a fully supported commercial “pure-play” version of the software that can be run on in-house servers (of course, as open source it is freely available to download, though the user must take charge of the maintenance and upkeep).  The SUSE distribution now offers some choice in the marketplace, Kotzen noted.

“This new option in the market makes Cloud Foundry much more accessible to a whole range of new users for whom the barriers of entry were previously prohibitive,” Kotzen said.

This is also the first certified version of Cloud Foundry to be distributed on containers — Pivotal uses virtual machines. This approach minimizes the footprint that Cloud Foundry takes up on servers, added Ron Nunan, SUSE senior product manager. This also allows the Cloud Foundry deployment to be managed by Kubernetes, which could be used to scale Cloud Foundry more easily and bring greater stability to the runtime.

Another benefit of this distribution is that, unlike most Kubernetes deployments, this one does not require the Bosh, a deployment management tool often used for setting up Kubernetes. “The fact that [customers] don’t need a second large complex steep-learning-curve hard-to-manage platform is good news,” she said, referring to Bosh.

For this platform, SUSE itself turns Bosh releases, which hold the deployment metadata, into Kubernetes orchestration deployment models, so Kubernetes itself can execute them, Numan said.

SUSE’s Linux-based container-oriented MicroOS, provides the underlying operating system, while the containers are equipped with Suse Enterprise Linux. The company uses its own Kubernetes distribution for this package.

The Cloud Foundry work actually originated with the Active State “Stackato” release. HP acquired that company in 2005, and in 2017 sold its cloud software components to SUSE. “When we took over the technology and engineers, we rebuilt the control plane using standard Kubernetes environment,” Numan said.

SUSE first debuted the SUSE Cloud Application Platform in September, as a beta. This update, version 1.1 includes Kubernetes support and the containerized and the certified Cloud Foundry. The company announced this new edition at the Cloud Foundry Summit, held this week in Boston.

The Cloud Foundry Foundation and Pivotal are sponsors of The New Stack.

Joab Jackson is Editor-in-Chief for The New Stack, assuring that the TNS website gets a fresh batch of cloud native news, tutorials and perspectives each day. He has logged over 25 years in infrastructure IT journalism, including stints at IDG,...
Read more from Joab Jackson
SHARE THIS STORY
RELATED STORIES
The Internet Is Not Reliable, but Planning for It Can Save You Matillion’s Data Productivity Cloud Brings dbt Orchestration Amazon Web Services Gears Elastic Kubernetes Service for Batch Work How to Gain Visibility into Kubernetes Cost Allocation Improving Price Performance Lowers Infrastructure Costs
TNS owner Insight Partners is an investor in: Docker.
SHARE THIS STORY
RELATED STORIES
Why We Built Cloud Native Object Storage for PostgreSQL with Amazon S3 Amazon Web Services Gears Elastic Kubernetes Service for Batch Work Why Cloud Data Egress Is Expensive Improving Price Performance Lowers Infrastructure Costs Confidential Compute on Azure with Kubernetes
THE NEW STACK UPDATE A newsletter digest of the week’s most important stories & analyses.
The New stack does not sell your information or share it with unaffiliated third parties. By continuing, you agree to our Terms of Use and Privacy Policy.