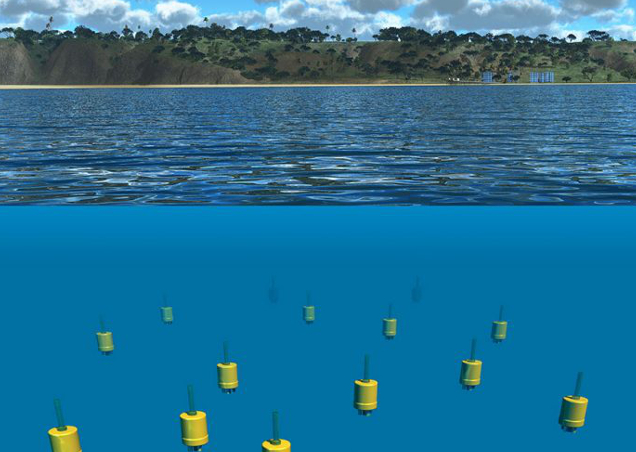 Studying marine wildlife is no easy task, as researchers are limited by the tools they have that help them observe those ever-moving ocean-dwellers up close. That’s especially true for scientists studying plankton, which are any number of drifting organisms that cannot swim against ocean currents, such as bacteria, archaea, algae and protozoa.

Despite their tiny size, plankton are a major food source for larger aquatic animals like whales and fish. Astonishingly, plankton also produce half of the planet’s oxygen. Despite their ecological importance, it’s not totally clear how these critters congregate and are pushed around by ocean currents, and how that affects their feeding and mating behaviors.

But that uncertainty is lifting, thanks to a swarm of underwater robots programmed to imitate the movements of plankton. Created by scientists over at the Scripps Institution of Oceanography at the University of California San Diego, they are now using these Miniature Autonomous Underwater Explorers (M-AUE) to better understand how plankton move in three dimensions underwater. The team’s findings could someday also help humanity mitigate threats like oil spills and harmful algal blooms, which can cause massive fish die-offs and make drinking water toxic for humans.

Until recently, researchers relied on mathematical models to test out assumptions about how these organisms are propelled and gathered within the complex confluence of ocean currents. Scripps’ Oceanographers Jules Jaffe and Peter Franks led the effort to invent these floating, autonomous robots, as detailed in a paper recently published in Nature Communications.

The bots are a culmination of decades of work: Franks is the scientist who published a paper two decades ago that suggested plankton cluster in thick patches when they are pushed together by so-called internal waves — large waves that move in slow motion beneath the ocean’s surface. Franks was unable to test his theory at the time, as there was no available technology at the time that made tracking each individual microorganism possible.

Fast forward twenty years, and technology has caught up with that scientific vision from years ago. The scientists’ “robotic plankton” are capable of drifting with ocean currents, but have been programmed to float up and down as real plankton might, by automatically adjusting their buoyancy using pistons to match the ocean’s internal waves. The plankton-mimicking robots are built to do so thanks to their form, which consists of two nested cylinders, constructed out of a dense but lightweight foam that can bear the weight of heavy on-board batteries. The bots are also equipped with temperature and pressure sensors, as well as a microprocessor and a microphone suitable for underwater use. The robotic plankton can descend between a depth of 10 to 50 meters without sinking.

“The big engineering breakthroughs were to make the M-AUEs small, inexpensive, and able to be tracked continuously underwater,” said Jaffe. 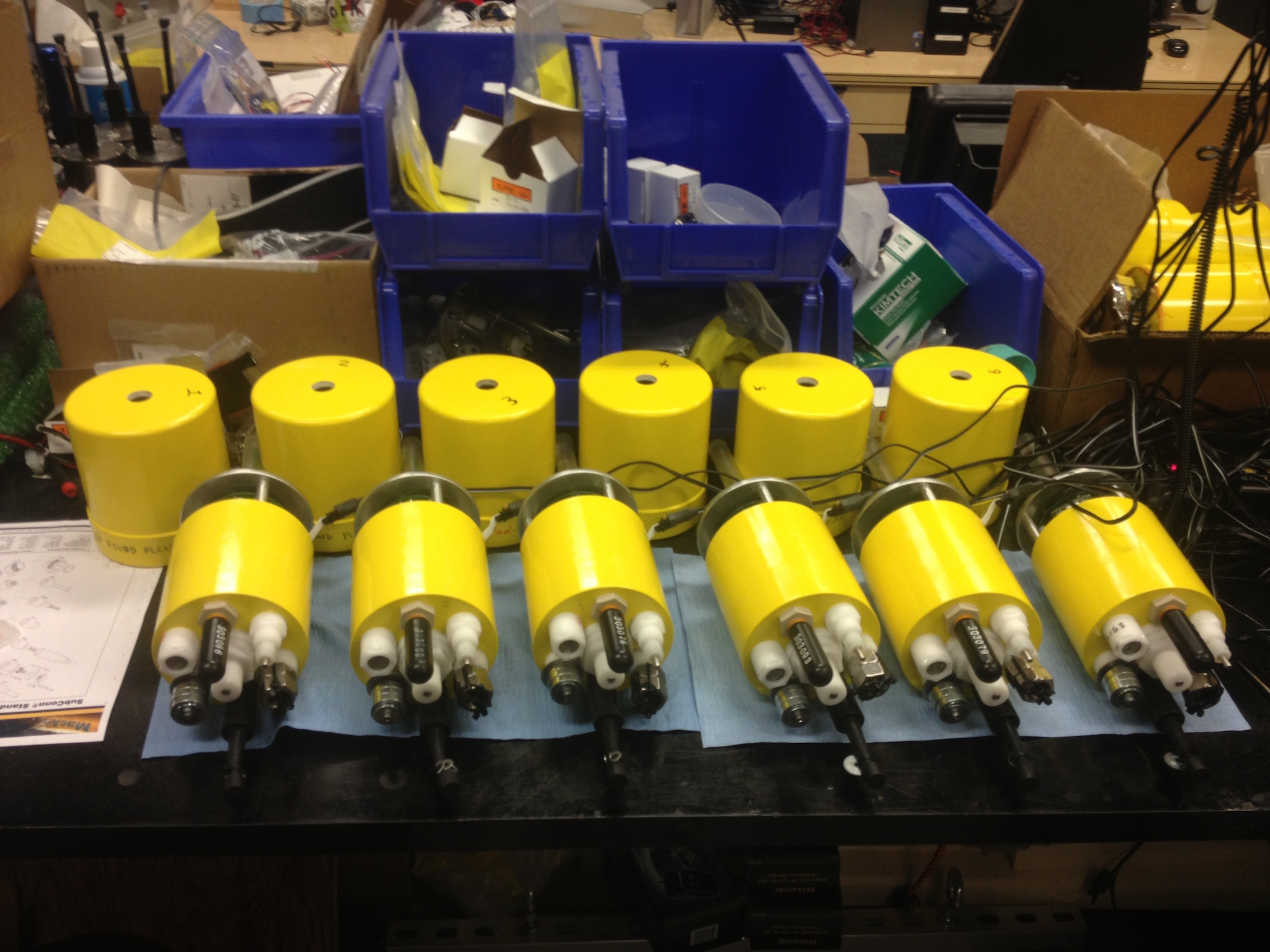 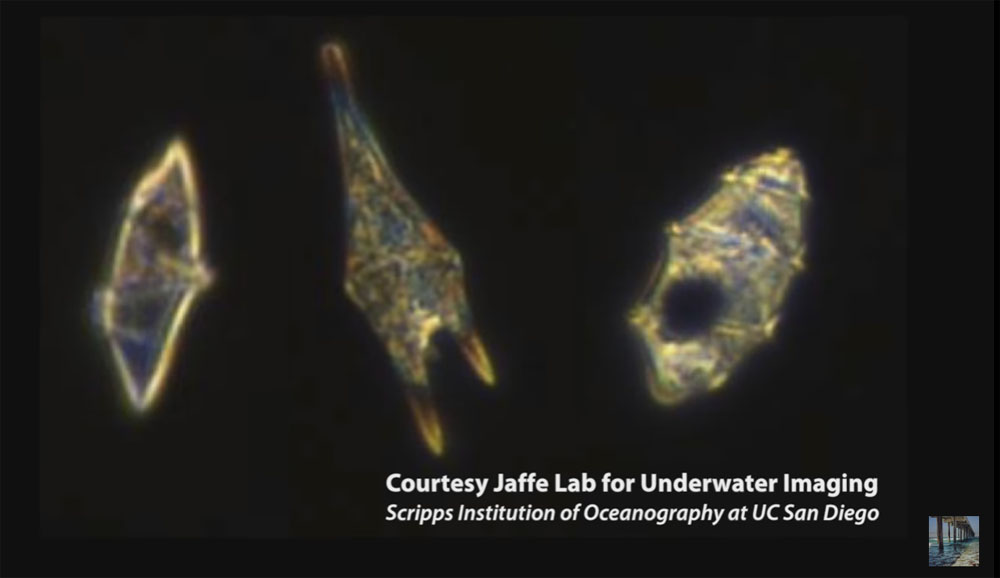 The paper describes the team’s five-hour experiment, which saw the release of a swarm of 16 M-AUEs that measured 300-meter (984-foot) across, off the coast of California. The swarm was programmed to remain at an underwater depth of 10 meters (33 feet). Because GPS data cannot be collected under the ocean’s surface, a specially developed tool that uses acoustic signals was used to track the individual robots, with data being collected every 12 seconds.

Thanks to this swarm of little bots no bigger than the size of an orange, the scientists were able to substantiate Franks’ decades-old mathematical theory about plankton movement. As the underwater temperatures around the swarm decreased, specifically when seawater crested, the swarm would scatter. During the increased temperatures found during wave troughs, the swarm would re-form, creating dense patches.

The findings aren’t just significant for the future monitoring of the world’s plankton populations, or checking in on oil spills. “This swarm-sensing approach opens up a whole new realm of ocean exploration,” says Jaffe. It’s the first time that such a swarm has been used for research purposes, and the team foresees building hundreds more, and adding cameras on them to help scientists take snapshots of threatened coral habitats or track dolphins, whales and other wildlife movements between marine protected areas. While we humans might not be able to fully comprehend how an interconnected web of life sustains us all, in the end, it nevertheless exists, and any information we can muster up will no doubt help us to better understand how to protect it.