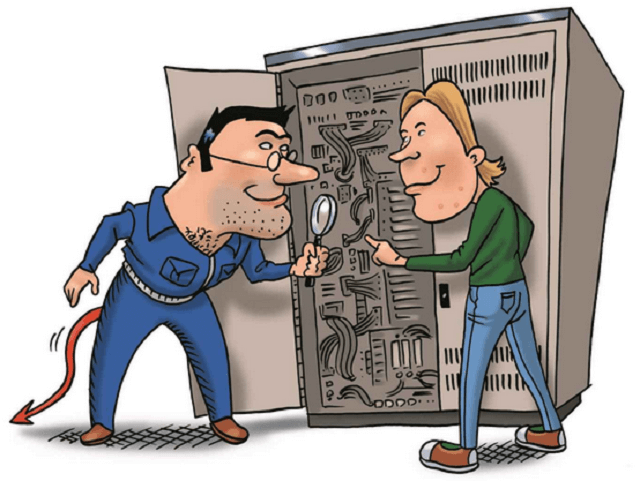 The last Friday of each July is “System Administrator Appreciation Day.” And if you don’t remember it, you may wind up with a BOFH.

Ah yes, the BOFH — that legendary, near-mythical creature whose origins date back at least 25 years — and an acronym that still triggers a mischievous smile among sysadmins.

The “Bastard Operator From Hell” was a fictitious character created for a set of amateur short stories by Simon Travaglia, who was himself a disgruntled systems administrator at a university in New Zealand.

“Do you know why the system is slow?” they ask.

“It’s probably something to do with…” I look up today’s excuse “.. clock speed”

“Oh” (Not knowing what I’m talking about, they’re satisfied) “Do you know when it will be fixed?”

“Fixed? There’s 275 users on your machine, and one of them is you. Don’t be so selfish – logout now and give someone else a chance…!”

You’d really think people would learn not to call…

Written between 1989 and 1991, Travaglia’s stories found a new life in the early days of the Internet, when they were first shared online, finding fans in an online newsgroup where more disgruntled sysadmins could share their own stories, this time about real-world clueless (L)users, and their own schemes for torturing them

I’m sorry, but comfortable is the last thing I want in my server room. I want it unbearably cold, and noisy. I want items scattered dangerously around the floor. I want random floor tiles to be missing. I want a very old sandwich of undetermined origin sitting half-eaten in the corner. I want the first thought of any person that enters my server room to be “Dear $DEITY, I must get out of this place IMMEDIATELY!”

But wherever they’ve appeared, stories about that malicious Bastard Operator from Hell always seem to strike a chord — probably because they conceal an unspoken truth about the very real relationship between those helplessly hopeless users and the supergeeks tasked with watching over them.

A Silicon Valley sysadmin once told me that one of his job requirements really was intimidation. “You want people to be a little afraid of you, so they don’t bother you with a lot of stupid requests, and only come to you when it’s really important,” he said.

And it’s probably healthy for these frustrated network operators to have their own newsgroup where they can let off some steam without acting on their darker impulses. Maybe it’s the sysadmin version of that famous quote from Voltaire: If the Bastard Operator From Hell didn’t exist, it would be necessary to invent him.

As a show of solidarity, some real-world sysadmins even began adding “BOFH” into their signature files — “like some sort of doctoral title,” joked one ’90s-era technology columnist. Others were applying their skills to a related project — the Bastard Operator from Hell excuse generator. (“Because Bill Gates is a Jehovah’s witness and so nothing can work on St. Swithin’s day.”) Keep reloading the page, and you’ll keeping being rewarded with yet another off-putting (and vaguely hostile) reasons for why your system isn’t working.

The cause of the problem is: Interference from lunar radiation.

The cause of the problem is: High nuclear activity in your area.

Time marches on, and eventually Travaglia’s original stories were republished with fond admiration in actual tech magazines like Datamation, according to Wikipedia, which adds that “By extension, the term is also used to refer to any system administrator who displays the qualities of the original.”

There are even some rare print editions of Travaglia’s stories, judging by listings on Amazon, with titles like “Bride of the Bastard Operator From Hell” and “Bastard Operator from Hell IV: Dummy Mode is Forever.” And in 2015, Travaglia finally collected the stories together into a $5.00 Kindle edition called “The Bastard Operator Omnibus. Book 1 1995-2003.”

“For us hapless IT folk, these little stories are … IT gold,” wrote one reviewer on Amazon. “They satisfy the repressed fantasies of revenge that all IT people so badly crave against pointy-haired bosses™, bean counters, marketing droids, vendor PEs, and the clueless users (lusers.. clusers?) who, combined, make our jobs that much harder and our lives miserable.” In 2001, even more new stories by Travaglia began appearing on the U.K. tech website, The Register, describing the new adventures of the Bastard Operator from Hell. (“He’s mean, he’s moody, he’s less than magnificent…”) And apparently, he’s lived there ever since, with new stories appearing to this day.

And then more than 25 years after their debut, the character received new fame when an April article in El Reg gushed, “We’ve found the real Bastard Operator From Hell.” It tells the story of an all-hands IT meeting that was interrupted by a phone call by a pesky salesperson.

“When you’re manning the IT help desk, you have no choice but to pick up the phone,” explained The Register, describing how the entire department teamed up to concoct the world’s very worst hold music. Listen here:

“We all just suddenly started working on it like we would any other problem — our help desk guy is converting the song to WAV, our senior netadmin is logging into the phone system and downloading some audio editing software, and I started working on the synthetic voice… Literally, every person in our department was contributing in one way or another —  it was really a team effort, and I’m proud to have built such a strong collaborative, business-oriented team (haha). We decided to start off with the audio at one-quarter volume, and then we ran it a 100 times through an amplifier plugin in order to break the digital clipping barrier and create that ‘nails on chalkboard’ effect.

“We edited and snipped the audio, pitched shifted a few things, and generally set out to make literally the worst recording ever. Once finished, we uploaded it to the phone server and created the queue to repeat eternally. We assigned it extension number 666. Once in the queue, any button you press once in this queue restarts the recording. Our new department policy is: when sales people call they are to be transferred straight to hell.

In April they uploaded their horrific masterpiece to Reddit’s forum for sysadmins, where it received over 740 upvotes —  and some more devilish suggestions. “Transfer them to a conference room. Set it up so it’s playing this as hold music. If another annoying person gets transferred to said conference room, record that shit…”

But in a fitting twist, it turns out that someone else had already done something similar. “[T]his one vacation package sales/scam kept calling us, so one day we told 48 of our PRI lines to all dial their call center at once and then put them in a conference. It sounded like we made their day; lots of telemarketers on the recording sounded like they were really happy to have something interesting happen in their lives — shouts of ‘what’s going on? This is awesome!’ and ‘hey; we’re all in here together, hahah!’ abounded.”

And the link triggered more fond reminiscences. “At a different place I worked I used to have a special Automatic Call Distributor queue for this. The Hamsterdance Song was the hold music for this Queue and we used to run a report just to see how long people would last before they gave up.” Another Reddit user said they’d heard of companies using “The Gummy Bear Song.”

If the Bastard Operator From Hell didn’t exist, it would be necessary to invent him…

As this year’s SysAdmin Day rolled around, ManageEngine — a company which makes IT management software — celebrated with a heart-tugging video about the unappreciated sysadmin on a special web page which also featured “quirky, printable posters” about the different type of sysadmin personality, some humorously re-captioned photos, and a Wordsearch puzzle with nothing but IT words.

“SysAdmin Day is a great opportunity for us to appreciate the silent strength behind all things related to IT,” said Vidya Vasu, the head of the company’s Community section. “Sysadmins are not just our day-to-day IT problem solvers; they are our warriors who continuously help keep IT and the business up and running in every organization.”

But maybe they know the real truth: That if you don’t remember “System Administrator Appreciation Day” — you may wind up with a BOFH.