Tame the Monolith with Cloud Foundry 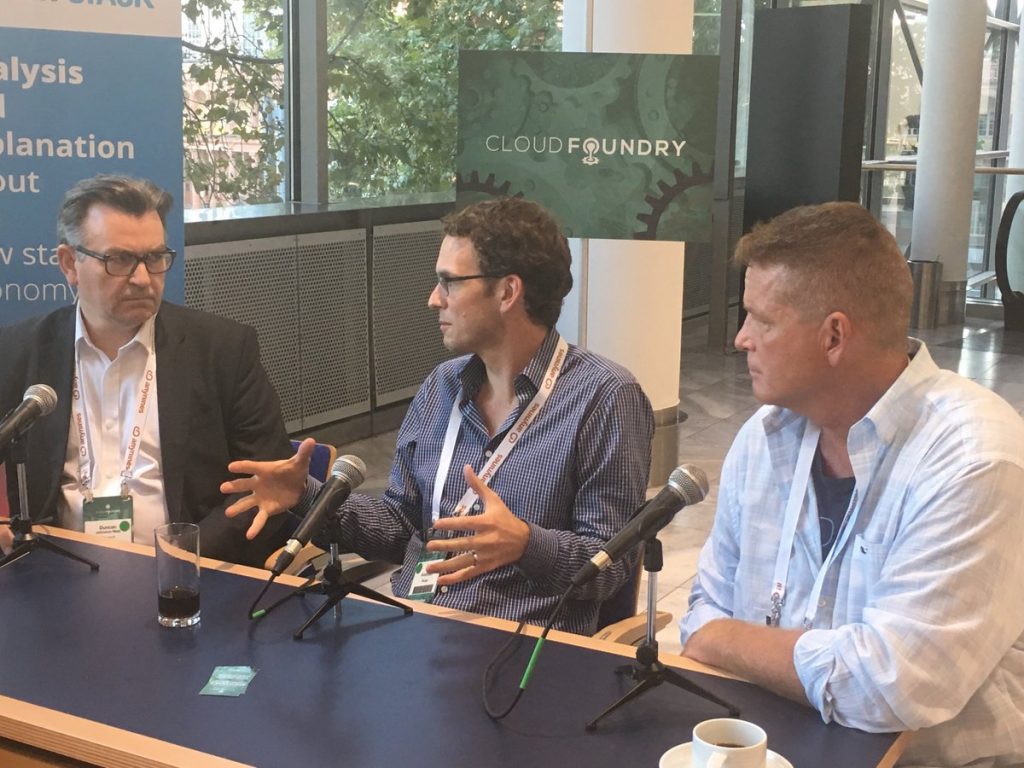 Traditionally, enterprise IT operations teams have struggled with their monolithic, zombie-like infrastructure that keeps coming back from the dead. In this episode of The New Stack Makers, Pivotal Vice President of Products Ian Andrews, Cloudsoft founder and CEO Duncan Johnston-Watt, and Dell EMC Cloud Platform Team President Brian Gallagher joined TNS founder Alex Williams during the Frankfurt Cloud Foundry Summit to break down how the Cloud Foundry platform enables today’s enterprises to bring their infrastructure into the cloud with ease.

While Cloud Foundry offers a wide breadth of services and tools to its end users, companies may struggle when addressing the needs of their users looking to run microservices at scale. To better help combat this, Pivotal has brought on board a team of evangelists that it hopes will aid users that may be trying to plan too far ahead.

“We’re teaching customers how to swim before they get to the deep end and drown in a lot of ways. I think the interesting thing that’s happening is we’re seeing a big shift from enterprises that were set up to buy software and configure it, into building their own software. And helping customers see these are all sides of the same object is the first step in figuring out this brave new world we’re entering,” said Andrews.

For some Cloud Foundry users, it’s less about the big picture, but the level of control over their operations that provides the biggest benefit. Johnston-Watt notes that whole Cloud Foundry was initially adopted by those on the bleeding edge of the ecosphere, “As it gets deeper into enterprise and people start being more serious about what they want to build with it, we’re seeing the need to tie it back into the existing enterprise world. The idea that you can pull existing data sets into the world of Cloud Foundry is what we’re seeing major demand for.”

Easing operational concerns when moving into the cloud is something that Andrews then went on to explain is something the platform does well compared to Kubernetes, noting that the Cloud Native Computing Foundation hopes to bring the service broker model into Kubernetes. “For larger organizations, there is no model where everything they have goes to the cloud tomorrow. It’s a long tail transition. People joke about strangling the monolith, but the monolith is going to be a zombie that just won’t die.”

Developers also feel the benefits of platforms such as Cloud Foundry. Often, developers are tied up with tasks unrelated to writing code, finding themselves more in support roles rather than working on new features or product updates. “The things that IT operations have had to deal with for decades, a lot of those headaches are taken away by the infrastructure automation and the capabilities that are built into the platform itself. It allows developers to go back and develop instead of support,” said Gallagher.