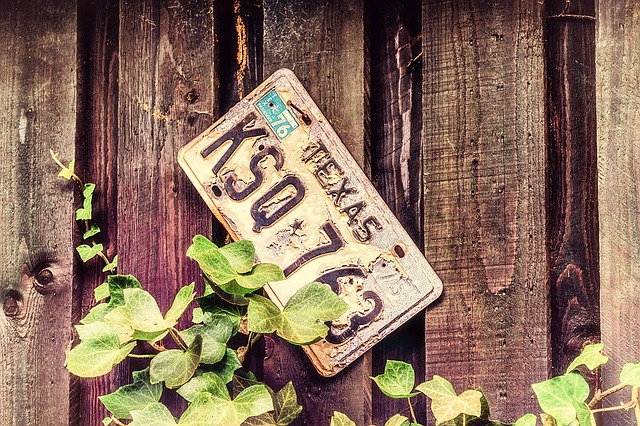 “Such laws are bad for our employees and bad for business,” the letter states. They could inhibit tech conferences from setting up in the state — a growing source of revenue for Austin in particular. They could also pressure Texas tech industries — which like all tech companies are desperately seeking top talent — to relocate elsewhere

The letter seems to be in response to Senate Bill 6, and its companion HB 2899, the “bathroom bill,” which is similar to a bill passed in North Carolina last year. Simply stated, the legislation requires a person to use a public restroom, locker room, or similar facility based on the sex stated on their birth certificate, making it a crime for transgender people to use facilities for the sex with which they identify and most often present to the world. It also specifically bans municipalities and school districts from enacting or enforcing trans-inclusive bathroom policies.

For many in the IT community, the consequences of this bill seem beyond severe. Not only can transgender people, attending a tech conference in the state, be arrested and jailed for using the bathroom, but they will be assumed to be pedophiles, and be put on the Texas sexual predator watch list. So not only is there the possibility of being hauled off to jail during a conference, the arrest will ruin the rest of your life. Just because you need to pass some water.

The bill is similar to North Carolina’s SB11 Bathroom Bill, which was partially repealed in March in an effort to keep the NCAA from leaving the state. According to the Associated Press, North Carolina is projected to lose $3.76 billion dollars over the next several years because of opposition to the law.

The Texas bill has been condemned by hundreds of businesses and several Texas chambers of commerce, celebrities and performers, tourism groups and sports organizations including the NBA, the NFL and the NCAA. The tech world, rooted in Austin has taken note. It has also been denounced by the Cloud Native Computing Foundation(CNCF) and several tech conference organizers have already signaled their plans to not return to Austin if the bill is signed into law. Austin alone is hosting 70 tech conferences this year.

Abbot has indicated that he will sign the bill, if passed.

Patrick promised to push for a special session, should the bathroom bill not pass. It stalled in the state Senate after being mended by the House in response to the outpouring of concern from the business community over loss of business if the bill passed. The revised bill only addressed trans children using restrooms in public schools; a move that Republican House Speaker Joe Straus thought “will allow us to avoid the severely negative impact of Senate Bill 6.”

The bill was sent back to the Senate for approval, where it was rejected.

Lt. Governor Dan Patrick, a conservative Republican, has made a priority of seeing these bills become law. According to the Human Rights Commission Patrick has made “a career out of his anti-LGBTQ animus.” According to the Texas Freedom Network, SB6 is just one of  25 anti-LGBT bills filed in the current legislative session are about hate and discrimination. That includes the 17 bills that would allow government, private individuals and businesses to use their personal religious beliefs as a cover for discriminating against LGBT Texans.

Among the bills championed by Patrick this year, include:

“As large employers in the state of Texas,” the letter says, “we are gravely concerned that any such legislation would deeply tarnish Texas’ reputation as open and friendly to businesses and families. Our ability to attract, recruit, and retain top talent, encourage new business relocations, expansions and investment, and maintain our economic competitiveness would all be negatively affected… we strongly urge you and the Texas legislature not to further pursue legislation of this kind.”

The letter comes as the 2017 legislative session ends. The Texas Legislature is limited to 140 calendar days and will not be in session again until 2019. Abbot has three weeks to sign the bills on his desk (or not) and is currently deciding on whether to call a special legislative session. A special session can be as long as 30 days and the governor has sole discretion as to the bills to be discussed.

“Discrimination is wrong,” says the letter, “and has no place in Texas or anywhere in our country. Our perspective is grounded in our values and our long-held commitment to diversity and inclusion.” 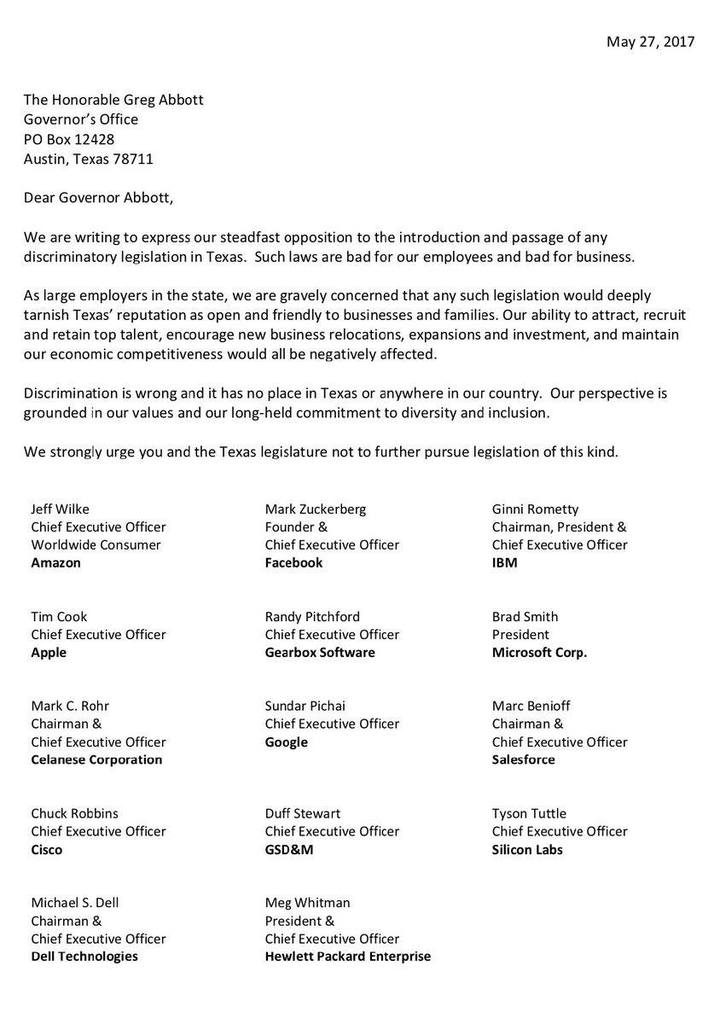 TC Currie is a journalist, writer, data geek, poet, body positive activist and occasional lingerie model. After spending 25 years in software development working with data movement and accessibility, she wrote her first novel during National Novel Writing Month and...
Read more from TC Currie
SHARE THIS STORY
RELATED STORIES
There Is No Shame in Customer-Reported Incidents Low-Code Tools Improve Devs' Work-Life Balance, Survey Finds How Security Champions Can Change Your Culture The Graph of Life in a Post-Relational World Kathleen Booth, Creator of the First Assembly Language
TNS owner Insight Partners is an investor in: Simply.
SHARE THIS STORY
RELATED STORIES
Engineering Leaders: Switch to Wartime Management Now Tackling 3 Misconceptions to Mitigate Employee Burnout Fear and Layoffs: How to Cope with Tech’s Uncertain Times SANS Survey Shows DevSecOps Is Shifting Left  How and Why to Respond to Incidents the Right Way
THE NEW STACK UPDATE A newsletter digest of the week’s most important stories & analyses.
The New stack does not sell your information or share it with unaffiliated third parties. By continuing, you agree to our Terms of Use and Privacy Policy.