Tectonic Summit Pancake Breakfast: How to Sell Kubernetes to the Hypervisor-Minded 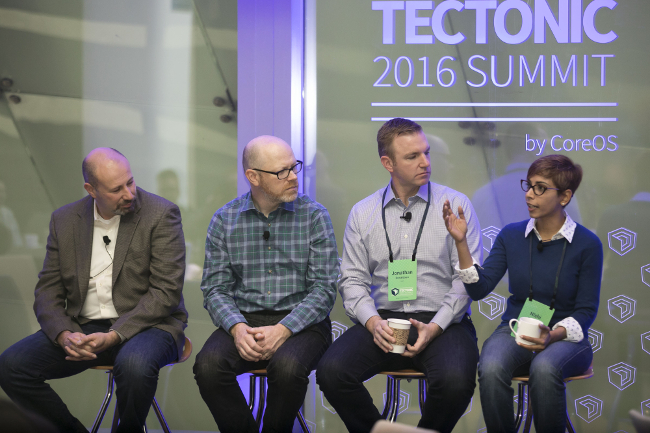 Throughout 2016, the community around the open source Kubernetes container orchestration tool has continued to grow at a pace that surprised many.

“Probably the biggest defining moment for the Kubernetes community right now is that other communities are communities of vendors more so than Kubernetes. I think Kubernetes is more a community of developers, operators, and users than it is of vendors. It’s up to us as users and developers in that community to continue to keep that feeling,” Intel Vice President and General Manager of Cloud and Infrastructure Technologies Jonathan Donaldson said on the 114th edition of the The New Stack Analysts podcast, a special “Pancake Breakfast Podcast” recorded during the CoreOS Tectonic Summit, held in New York this week.

#123: Tectonic Summit Pancake Breakfast – How to Sell Kubernetes to the Hypervisor-Minded

According to Davidson, SAP has been working with Kubernetes for 11 months and has experienced its fair share of challenges in doing so. Davidson noted that the most beneficial part of the Kubernetes community was its overall helpfulness and communication. Regardless of the time of day, she did not have to wait long for a community member to respond to a question she had while building out the SAP engineering and operations pilots.

In coming up with a variety of pilots to showcase why moving SAP from its hypervisor-focused infrastructure over to Kubernetes would be beneficial for the company, Davidson was met with questions such as, “Why do we need this?” and “What’s the point of another orchestration layer?” to which she set about creating pilots that would display the many improvements Kubernetes could offer SAP in an aim to take it into production.

Davidson and her team built a business case, one that showed that a container architecture on bare metal would yield a 10-12 percent performance boost. “We have proved the end-to-end use case on the pilot. We’re moving into an operational pilot, and hopefully, within the next five months we can get there,” she said.

It is the continued support and education of the community as a whole that has led to organizations both large and small to take notice of Kubernetes. “There is more education around what to use containers for and how to use them. It starts giving developers the ability to use containers and different technology in parallel and figure out what they want to migrate and what they don’t at this point.” Saparov noted.

For the majority of the Kubernetes community, despite its size, there is a continued commitment to keeping it a small, centralized group that remains helpful and responsive to all, not just company vendors with questions. “It should not become something where vendors have a huge influence. I think that would be contradictory to everything Kubernetes stands for. It scares the hell out of me to think of a future like that,” said Davidson.

As the conversation drew to a close, Donaldson offered sage parting advice to conference attendees. “Any time you have an open source community that’s generating as much interest as this one we have, is you’re going to have vendors seeing value and coming into that space. I think any time you let any of the large open source project become big you’re going to have the same kind of issue happening.”

Intel sponsored this podcast. CoreOS is a sponsor of The New Stack.