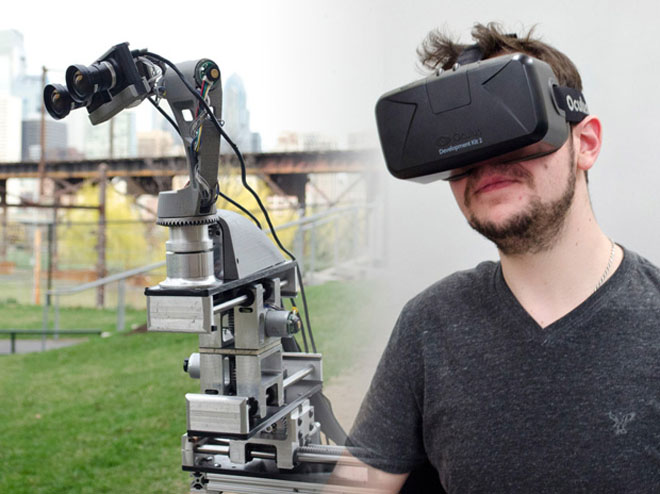 Not able to make it to a meeting in person? Or want to visit a far-off place without actually having to travel there? No problem: nowadays, one can also use what’s called a telepresence robot, which can be wirelessly and remotely controlled, and allows you to see through the robot’s ‘eyes.’

Consumer companies like Double Robotics or Beam already offer telepresence systems that link up users with a remote-controlled bot that can be your eyes and ears on the ground, without you having to be there. But most of these systems are glorified versions of teleconferencing, with little possibility for manipulation of the environment and a less-than-seamless experience that some have likened to “playing Doom, but in an office.”

But this may change with DORA, the Dextrous Observational Roving Automaton that’s currently being developed by a University of Pennsylvania robotics research team. What’s different about the DORA platform is that it incorporates virtual reality technologies like Oculus Rift, offering users a much more immersive experience that’s also relatively affordable.

The DORA system utilizes an Oculus headset, which tracks the user’s head movements in all six degrees of freedom, using an inertial measurement unit (IMU) and infrared beacon tracking. According to IEEE Spectrum magazine. This data is beamed over to Arduino and Intel Edison microcontrollers located on the robot, which in response, calibrates its actuators to move its head in the same orientation. DORA’s cameras then stream back video at 30 frames per second, giving the operator the sense of a more seamless view of what’s happening around the robot, and the sense that they are actually there. 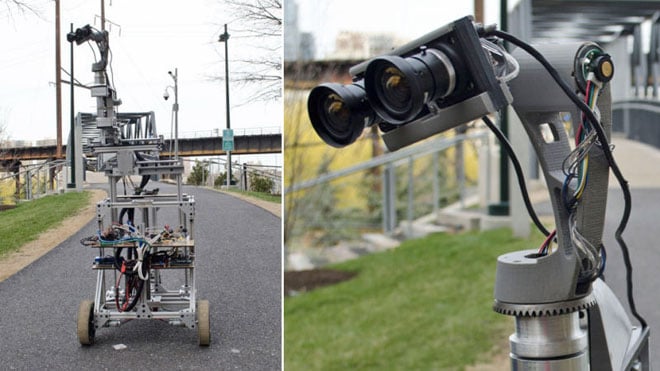 The difference between DORA and other telerobots is its intention to offer users a truly immersive experience, using a physical-virtual interface that provides real-time visual and audio feedback through the headset, rather than merely having users stare at a flat screen. In this sense, a system like DORA would be invaluable in exploring remote places, or offering extra mobility to disabled persons, or giving first responders another option to use.

There’s no doubt there could be military applications, where robot avatars could be sent in to check out hostile terrain, without any risk to human lives. Robots like DORA could be used for remote tourism, where visitors could log in, look and move around, without ever having to spend money to leave home.

But even though the experience based on virtual immersion, with a live system such as DORA’s, one can’t predict what might happen, explained team researcher Emre Tanırgan:

You feel like you are transported somewhere else in the real world as opposed to a simulated environment. You actually get to see people interacting with you as if you were actually there, and it’s difficult to recreate the same experience in a virtual environment right now. You could argue that real-time computer graphics used for VR will soon catch up to the level of realism of our world, but another key difference is the fact that everything is live. There is an inherent unpredictability with a system like this where you could go somewhere in the real world and not know what could possibly happen when you’re there.

Of course, as a prototype, there are still kinks to work out. First of all, DORA is currently using a radio link that only has about 7 kilometres (4.3 miles) of range, which would have to be changed to a WiFi or 4G connection if it’s to go farther afield. Due to constraints in its mechanical components, DORA’s current latency rate of 70 milliseconds also leaves a bit to be desired, with 20 milliseconds or less being most ideal, with the difference in delay causing users to feel something is off, or worse, get nauseous.

But in any case, robots like this could be the next wave of remote presence technologies, bringing us to places where we might not have imagined going. The team is now working to improve the system, and with sufficient funding, hopes to develop a commercial version priced around USD $2,000, available within two years.