The Future of Open Source Contributions from KubeCon Europe 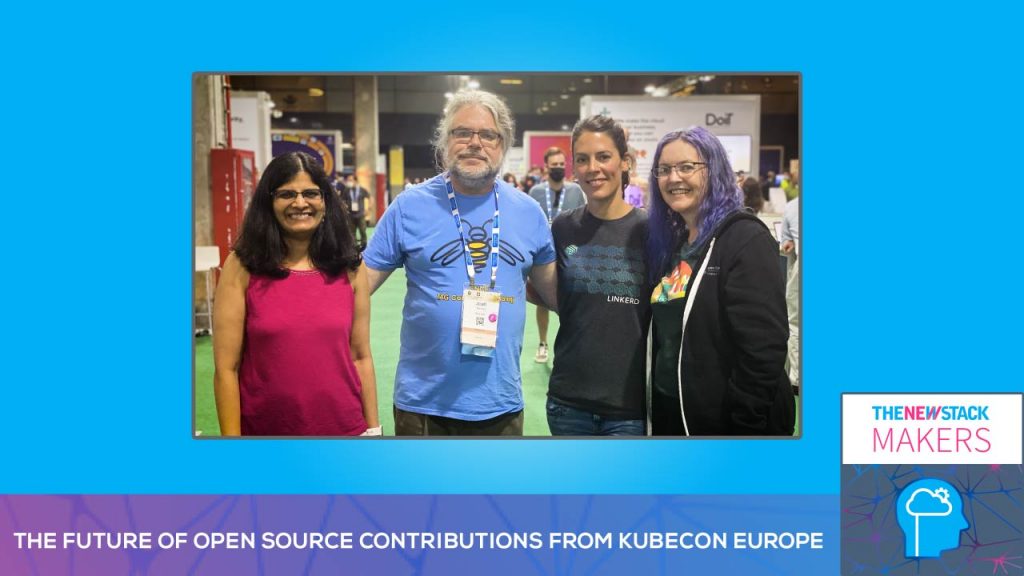 That’s where the Tech Advisory Group or TAG on Contributor Strategy comes in, acting as maintainer relations for the Cloud Native Computing Foundation. In this episode of The New Stack Makers podcast, recorded on the floor of KubeCon + CloudNativeCon Europe 2022, we talk to Dawn Foster, VMware’s director of open source community strategy; Josh Berkus, Red Hat’s Kubernetes community manager; Catherine Paganini, Buoyant’s head of marketing and community; and Deepthi Sigireddi, a software engineer at PlanetScale. Foster and Berkus are the co-chairs of the Contributor Strategy TAG, while Paganini is the creator of Linkerd and Sigireddi is a maintainer of Vitess, both CNCF graduated projects. Each brought their unique experience in both open source contribution and leadership to talk about the open source contributor experience, sustainability, governance, and guidance.

The Future of Open Source Contributions from KubeCon Europe

With 65% of KubeConEU attendees at a CNCF event for the first time, albeit still during a pandemic, it makes for an uncertain signal for the future of open source. It either shows that there’s a burst of interest for newcomers or that there’s a dwindling interest in long-term contributions. The executive director of CNCF Priyanka Sharma even noted in her keynote that contributions for the foundation’s biggest project Kubernetes have grown stagnant.

“I see it as a positive thing. I think it’s always good to get some new blood into the community. And I think the projects are working to do whatever they can to get new contributors,” Foster said.

But it’s not just about how many contributors but who. One thing that was glaringly apparent at the event was the lack of diversity, with the vast majority of the 7,000 KubeConEU participants being young, white men. This isn’t surprising at all, as open source is still based on a lot of voluntary work which inevitably excludes those most marginalized within the tech industry and society. According to GitHub’s State of the Octoverse, it sees only about 4% women and nonbinary contributors, and only about 2% from Africa.

If open source is such an integral part of tech’s future, that future is built with more inequity than ever before.

“The barrier to entry to open source right now is having free time. And to do free work? Yes. And let’s face it, women still do a lot of childcare, a lot of housework, much more than men do, and they have less free time.” Sigireddi continued that there are other factors that discourage those widely underrepresented in technology from participating, including “not having role models, not seeing people who look like you, the communities tend to have in-jokes [and other] things that are cultural, which minorities may not be able to relate to.” In addition, most open source code, while usually forked globally, exists in English only.

One message throughout KubeConEU was, if a company relies on an open source project, it should pay some of its staff to contribute to and support that project because a business may depend on it. This will in turn help bring OSS up a bit closer to the standard of the still abysmal tech industry statistics.

“From an ecosystem perspective, I think that companies paying people to do the work on open source makes a big difference,” Foster said. “At VMware, we pay lots of people who work primarily on upstream open source projects. And I think that does help us get more diversity into the community because then people can do it as part of their regular day jobs.”

Encouraging those contributors that are underrepresented in OSS to speak up and be more representative of projects is another way to attract more diverse contributors. Berkus said the Contributors Strategy TAG had a meeting at KubeConEU with a group of primarily Italian women who have started an inclusiveness effort, starting with some things like speaker coaching and placement.

“It turns out that a lot of things that you need to do to have more diverse contributors are things you actually needed to do anyway, just to make things better for all new contributors,” Berkus explained.

Indeed, welcoming new open source contributors — at all levels and in both technical and non-technical roles — is an important focus of this TAG. Paganini, along with colleague Jason Morgan, is co-author of the CNCF Landscape Guide, which acts as a welcome to the massive, overwhelming cloud native landscape. What she has found is that people will use open source because of the technology, but they will contribute to it because of the community.

“We see a lot of projects really focusing on code and docs, which of course is the basics, but people don’t come for the technology per se. You can have the best technology, it’s amazing, and people are super excited, but if the community isn’t there, if they don’t feel welcome,” they won’t stick around, Paganini said. “People want to be part of a tribe, right?”

Then, once you’ve successfully recruited and onboarded your community, you’ve got to work to not only retain but promote from within. All this and more is jam-packed into this lively discussion that cannot be missed!