The Graph Cleans Up Complexity in Its Web3 Infrastructure

Announcements at the user conference hosted by Edge & Node including new features aimed at cleaning up its complexity.
Jun 6th, 2022 7:24am by Jake Ludington

Graph Day, held last week in San Francisco by Edge & Node, included a number of announcements aimed at benefiting the developers who use The Graph Protocol, the indexing protocol used for querying Web3 networks. Here’s the news from the event that will affect developers who are creating the open APIs called Subgraphs, and leveraging The Graph Protocol for projects.

Edge & Node originally launched a hosted service at the first Graph Day back in 2019. It was always intended to be a temporary solution to support developers while fully decentralized indexing and querying services ramped up.

During his keynote address, Yaniv Tal, co-founder of The Graph and CEO of Edge & Node, made the announcement that the hosted service will be fully phased out by Q1 2023. In a later presentation, Brandon Ramirez, head of research and product at Edge & Node, flashed the following graph on the screen, showing that both services are very close to operating in the five-nines range we’ve come to expect for web services. 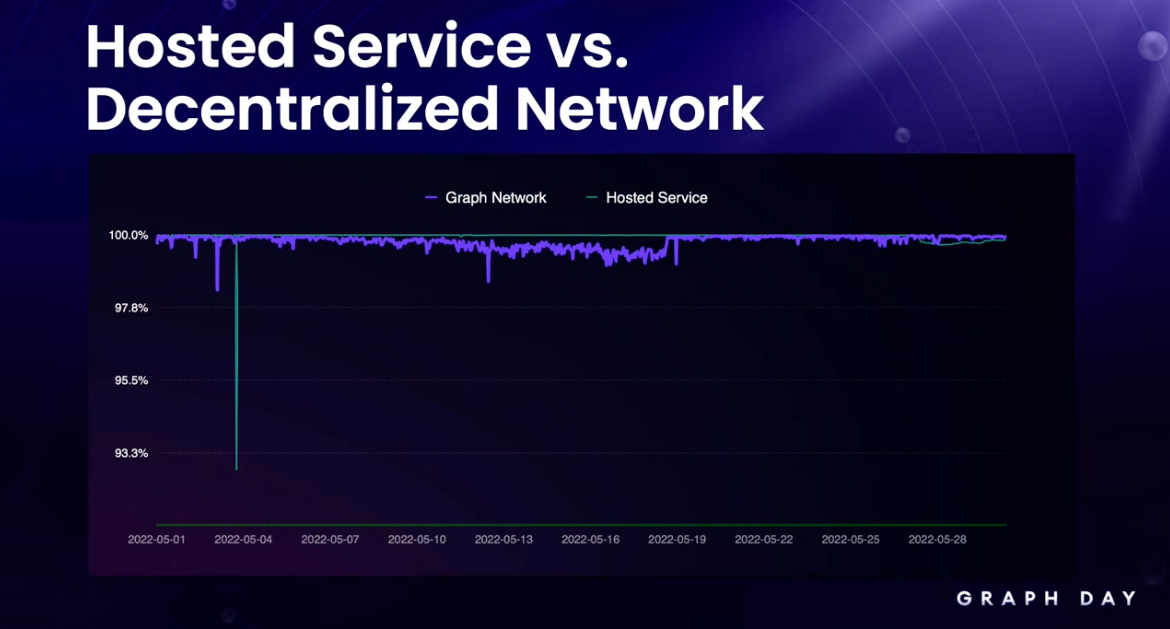 “There are even times when the Edge & Node Hosted Service has had significant outages, and the decentralized network has been more robust,” Ramirez said. This should create confidence for developers to know that decentralization is ready to fully support their workflows. This leads us to the next announcement…

Ramirez was on stage to introduce a proposal for a community vote on supporting The Graph Network transactions on the Layer 2 Arbitrum blockchain. A key motivation for this proposal is reducing the transaction costs for Indexer, Curator and Delegator roles.

As you can see in the following chart, the estimated reductions in cost for moving from Ethereum to Arbitrum One are substantial. The Upgrade Subgraph estimate is based on two updates to a subgraph per month, costing approximately $91.50 today and dropping to $3.50 for the same two updates on a Layer 2 solution.

The Allocation Lifecycle is the cost of running an Indexer for a fixed period of time, which also results in substantial cost savings. 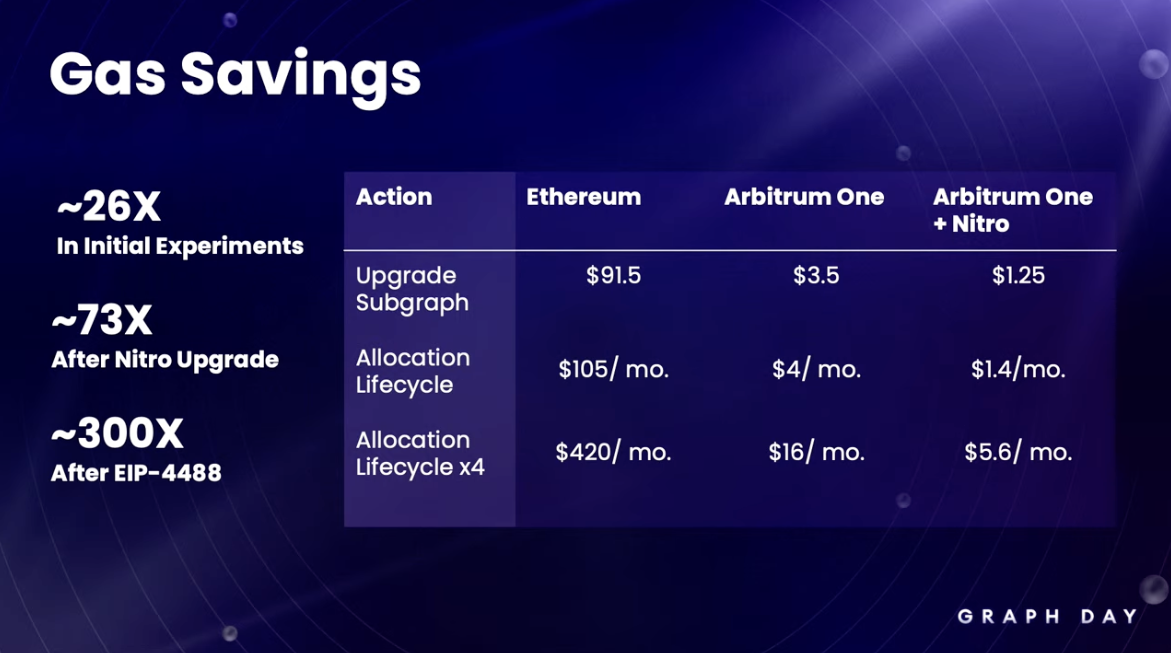 In theory, this should translate to either lower costs for the same frequency of subgraph updates, or the opportunity for more frequent updates because the costs are lower. If the community approves the proposal, the next step would be to roll out a Devnet on Layer 2 to allow testing of graph curation, allocation, and fee settlement.

While we’ve seen a number of dApp and NFT projects rollout on Layer 2 solutions, The Graph is among the earliest adopters of Layer 2 technology by an infrastructure protocol. You can review the GIP proposal on The Graph forum.

Toward the end of his presentation, Ramirez talked about improving The Graph user experience.

“For us,” he said, “the developer experience starts with the Subgraph Studio, where we do things like give you subgraph developer tools for API key management, preferences, [and] we have the Subgraph Studio Sandbox where you can deploy and interact with the subgraph without having to acquire GRT or interact with the blockchain. But there are limits to what we can do on the frontend.”

Part of those limitations is the need for developers to interact with multiple bonding curves, which can create issues with price slippage due to the miner maximum extraction value (MEV). There’s a good explainer about MEV from Philip Daian here, and GIP-0025 offers a good explanation about how The Graph is dealing with these cost fluctuations.

It would be nice to never think about billing as a function of the developer experience, but most of us are at least somewhat familiar with the way infrastructure services like Amazon Web Services handle billing. The Web3 world, with various tokens and fluctuating fee structures, has made that more complicated.

Ramirez acknowledged this and highlighted a new approach to eliminating some of this complexity that shows The Graph is maturing as a service provider. You can see from the diagram below that The Graph is adding in a billing router that cleans up some of the complexity and obfuscates it away from developers. 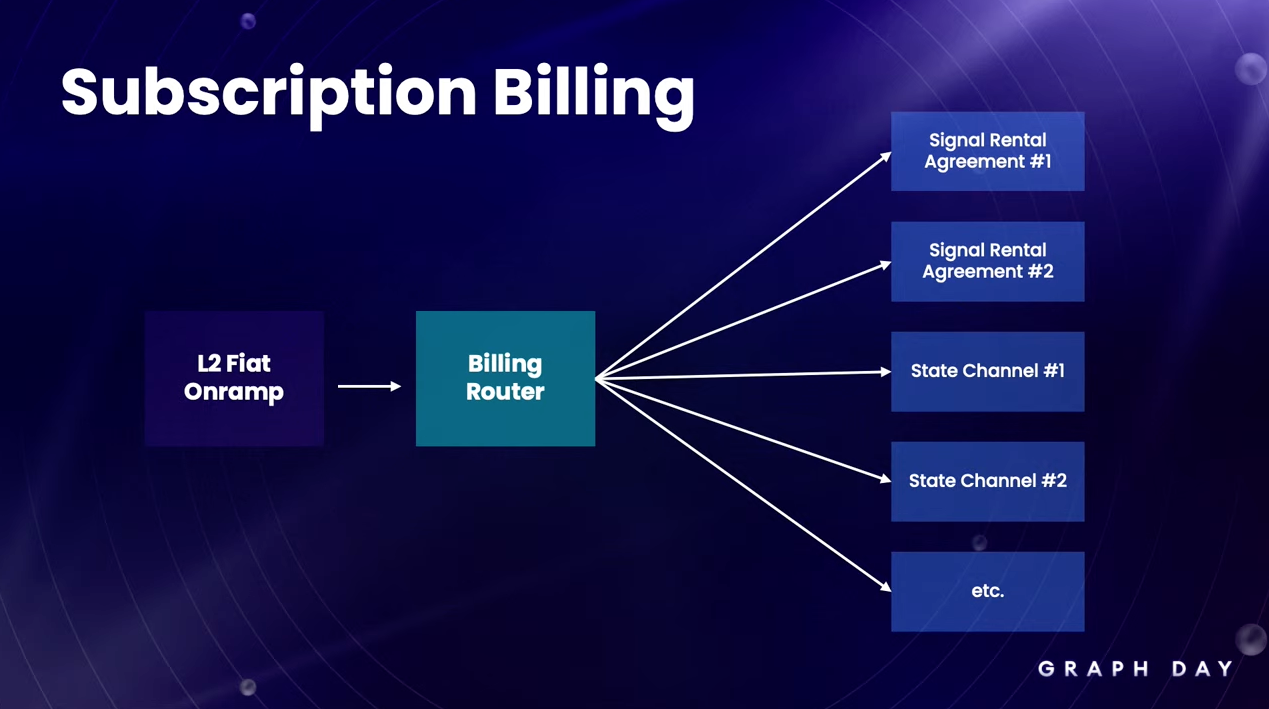 All of these announcements are a good indication that The Graph is becoming a mature infrastructure solution. Moving to a fully decentralized network should create network resiliency. The proposal to support Layer 2 transactions will definitely reduce costs and likely create opportunities for smaller dApps that couldn’t justify Ethereum economics.

And while issues around cost and billing are never sexy, they do make it easier to get the finance team on board when they are more predictable. You can watch Graph Day in its entirety on YouTube.