The Great and Geeky Legacy of ‘Jeopardy!’ Host Alex Trebek 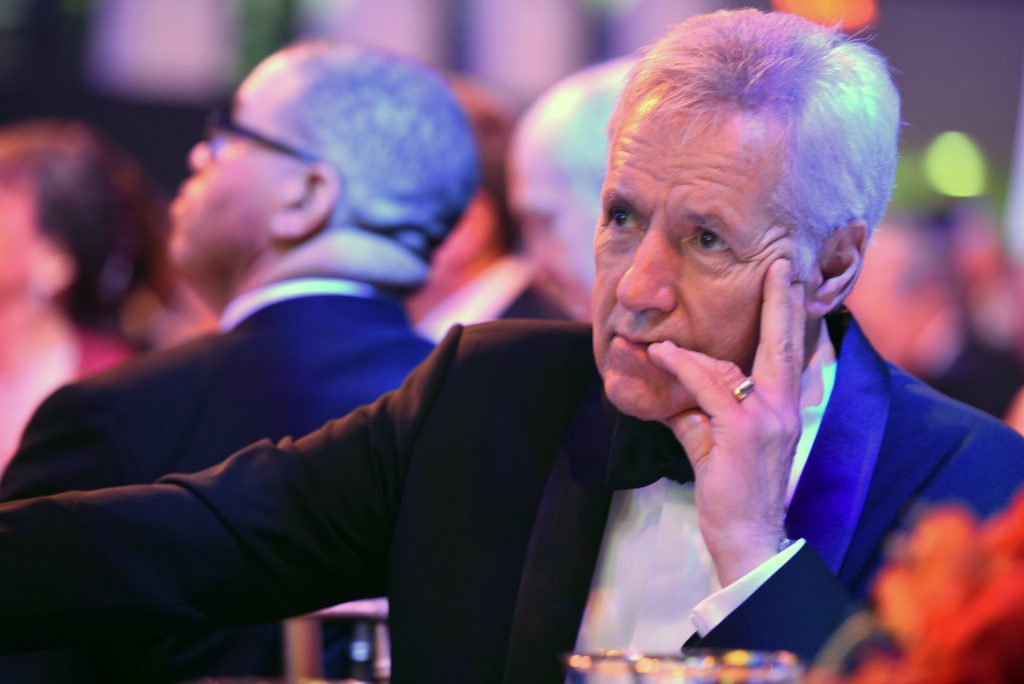 “I don’t like spending time with stupid people,” Alex Trebek once joked while warming up the audience for yet another taping of the quiz show “Jeopardy!” Business Insider caught this quote as it was visiting the set for a 2017 interview — just two years before Trebek was diagnosed with pancreatic cancer in March of 2019.

Last week saw the end of Trebek’s remarkable 80-year life — 57 years of which he’d spent hosting television shows. But in the final 36 years as “Jeopardy!”‘s permanent host, Trebek had become something more, a familiar exemplar of both knowledgeability and welcoming friendliness. This week fans took to our increasingly online world to share stories about just how much he’d meant to them over the years, and the very real impact he’d had on their lives.

And not surprisingly, many of those stories came from the world of technology.

In 2011 “Jeopardy!” made history as the proving ground for humankind’s advancing intelligence-simulating technology. Trebek presided over what the show’s producers called “the first-ever man vs. machine “Jeopardy!” competition, pitting two top human contestants against IBM’s computerized question-answering system Watson. Harry Friedman, executive producer of “Jeopardy!” called it “not only a historic moment for television, but also for scientific discovery and innovation.”

But while Watson has gone on to other applications, Trebek’s real contribution to the culture may be even more widespread. In an official statement on his website, Canadian prime minister Justin Trudeau remembered that “For every memorable moment on the show, millions more were made in living rooms around the world, as friends and families huddled around the TV, shouting at the screen, looking for the Daily Double.”

Sites have been telling the story of Burt Thakur, a 37-year-old electrical engineer from Palm Springs. “Thakur thought the cameras had stopped rolling when he told Trebek how much the host meant to him and his Indian immigrant family,” remembers the Los Angeles-based blog LAist.

After winning $20,400, Thakur was asked if anyone special was cheering for him back at home, remembered the “Today” show. “You know, here’s a true story, man,” Thakur replied emotionally. “I grew up, I learned English because of you. And so, my grandfather, who raised me — I’m gonna get tears right now — I used to sit on his lap and watch you every day so it’s a pretty special moment for me, man.”

LAist also captured the end of the story. Last Sunday, while driving, “Thakur got word that 80-year-old Trebek had died of pancreatic cancer. Suddenly feeling shaky, Thakur pulled to the side of the road, and started to cry. ‘I know people get upset when celebrities die,’ Thakur said, hours later. ‘To me, he wasn’t a celebrity. To me, Alex Trebek was just another uncle.'”

In a special memorial in Time magazine, long-time “Jeopardy!” winner Ken Jennings wrote that “He wasn’t just a TV host. He was part of America’s family.”

Twitter user Nina J, an Indian immigrant, tweeted that “Almost every Indian child has spent hours watching Jeopardy. Alex was like an uncle for me, for all of us.” Burt Thakur responded, “So many people feel the same way Nina.”

And one of the people sharing the clip was engineer/venture capitalist Chamath Palihapitiya (founder of Social Capital), who shared his own story of how Alex Trebek affected his life: “When I was in high school, I had shitty grades. But I would watch Jeopardy with my dad each night and a few times ran the entire board. It helped me decide I was smart and it was high school that was stupid.

Love from the Champions

Last year, one Tournament of Champions contestant seemed to make Trebek choke up with emotion when they wrote as their answer in the Final Jeopardy round: “We love you Alex Trebek.”

It turns out that contestant — Brown University student Dhruv Gaur — had scored a perfect 1,600 on their SAT tests, possibly due to “the steady diet of Alex Trebek during dinnertime when he was growing up,” remembered a profile at Brown University. “I could’ve tried to puzzle it together,” Gaur posted later on Twitter, “but really, just kept thinking about Alex, and thought he should know.”

Soon #WeLoveYouAlex had become a popular hashtag on Twitter. And Gaur shared his feelings again this week on Twitter. “I’m full of gratitude for the joy Alex brought to homes like mine every night. I feel lucky for the few episodes I got to share this show with him. Even more lucky to share with him how much he meant to all of us.”

Others in the tech community shared memories of Trebek in a thread on Hacker News. Two different posters remembered some of their earliest attempts at programming involved software that recreated “Jeopardy!.”

Another developer remembered moving to the U.S. in 1995, before the internet became ubiquitous (and when cable TV was still expensive). “For this then young man, Jeopardy and Mr. Trebek offered a peek into Americana that extends even today… thanks to Mr.Trebek, America offers a fleeting familiarity… I will miss Mr.Trebek in a way that will last my lifetime. ”

“You played a huge role in making nerdy cool,” wrote Chicago-based developer Mahmoud Al-Qudsi “in addition to bringing credibility back to trivia game shows. You were an incredibly kind, witty, and passionate role model. Your ability to be simultaneously no-nonsense yet fully human was second to none. You will be missed greatly.”

Maybe it was fate that brought the show a man who was perfectly suited to the moment. In “Time,” Ken Jennings remembered that Trebek himself “was the son of an immigrant family from working-class Sudbury, Ontario, and after Jeopardy! tapings I would often see him in a baseball cap and dad jeans, heading for his pickup truck.”

“Alex was a throwback to a generation of self-reliant, self-taught generalists—curious about everything, eager to try everything for himself,” Jennings wrote. And he shared a memory from his “Jeopardy!” All-Stars teammate Monica Thieu, who remembered that “Eleven-year-old me felt like he was Gandalf. He was just this emblem of… I don’t know. Wisdom?”

As Trebek’s many fans shared their appreciation, the show’s executive producer have also recorded a tribute, remembering that “He loved this show. And everything it stood for…

On one of Alex’s last days in the studio, he taped this special message about the Compassion Project, a national initiative to teach elementary school kids the meaning of compassion with the #CompassionChallenge. @EVERFI

“He will forever be an inspiration for his constant desire to learn, his kindness, and for his love of his family,” “Jeopardy!” executive producer Mike Richards said in an emotional statement. His final 35 episodes will still air — as “That’s what he wanted,” Richards noted.

“On behalf of everyone here at Jeopardy, thank you for everything, Alex.”

SHARE THIS STORY
RELATED STORIES
2022 in Review: AI, IT Armies, and Poems about Food 5 Ways ChatGPT Could Supercharge Chatbots How to Get Started Filling 3.4 Million Cybersecurity Jobs Entrepreneurship for Engineers: Building for Customers’ Love 2023 Will Be the Year FinOps Shifts Left Toward Engineering
SHARE THIS STORY
RELATED STORIES
Entrepreneurship for Engineers: Avoiding Feature Bloat The Power and Ethical Dilemma of AI Image Generation Models Java's James Gosling on Fame, Freedom, Failure Modes and Fun Entrepreneurship for Engineers: Building for Customers’ Love Donald Knuth's 2022 'Christmas Tree' Lecture Is about Trees
THE NEW STACK UPDATE A newsletter digest of the week’s most important stories & analyses.
The New stack does not sell your information or share it with unaffiliated third parties. By continuing, you agree to our Terms of Use and Privacy Policy.