The Great Unbundling: JAMstack and the Future of the Web

The JAMstack is a philosophy, methodology, and set of tools for building web applications that are faster, more secure, and more scalable than applications built with traditional monolithic web architectures.
Jun 1st, 2021 9:38am by Vinay Iyengar and Andy Kangpan 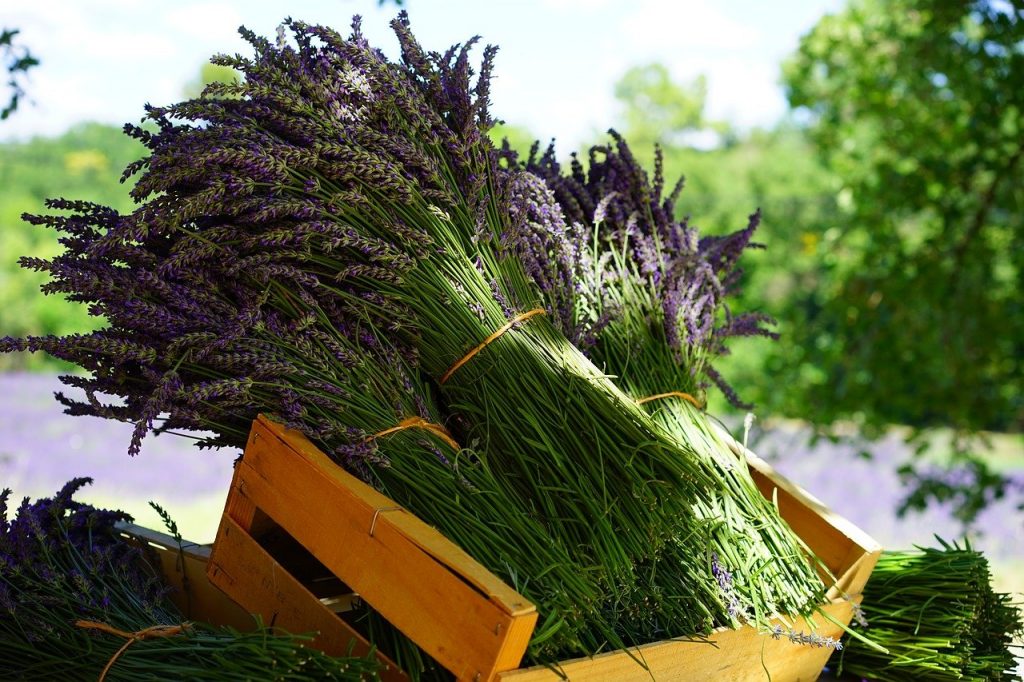 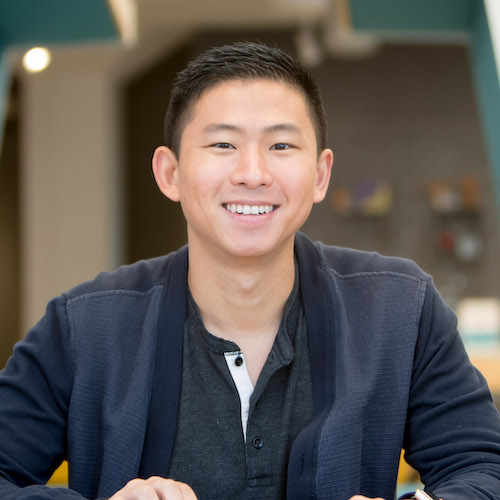 Andy Kangpan
Andy joined Two Sigma Ventures in 2017 and is based in New York. He focuses on investments in enterprise software, cybersecurity, and blockchain. Andy has been part of the early-stage tech ecosystem in NYC for over a decade as an operator, advisor and investor. Prior to joining Two Sigma, Andy was an investor with ff Venture Capital where he invested in early-stage companies building innovative technologies in areas such as robotics and machine learning.

One of the most exciting trends in the software development world today is what has come to be known as the JAMstack. Originally coined by Mathias Biilmann, the co-founder of Netlify, the term literally stands for JavaScript, APIs, and Markup, but has become synonymous with modern web development. To talk about the JAMstack, you are really pointing to a number of overlapping trends in the development community including (but not limited to):

Since the JAMstack is such a broad topic, it is challenging to properly define. While many have discussed the rise of the JAMstack in the past, we wanted to provide a clear explanation of the underlying technologies and trends, why we believe they are important, and where we think this is going.

What Is the JAMstack? 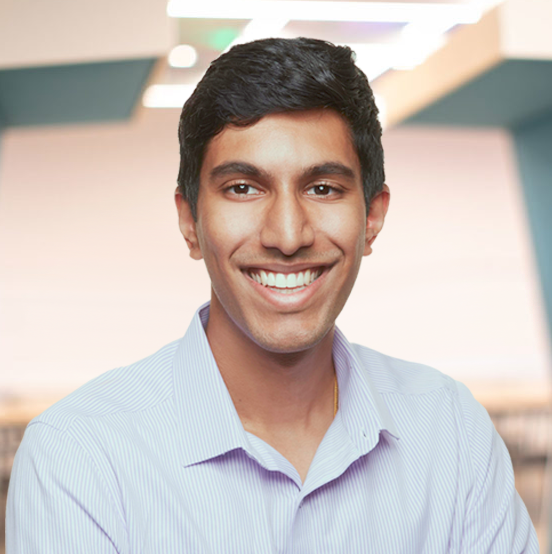 Vinay Iyengar
Vinay joined Two Sigma Ventures in 2020 and is based in San Francisco. He focuses on investments in enterprise software, machine learning, marketplaces, and infrastructure. Vinay’s background is as a technologist and builder. He has spent time over the years as a researcher, engineer, and software entrepreneur, and most recently was an investor at Bessemer Venture Partners where he sourced and led several early and growth-stage investments. Vinay earned a bachelor’s degree in computer science and economics from Harvard.

The JAMstack is a philosophy, methodology, and set of tools for building web applications that are faster, more secure, and more scalable than applications built with traditional monolithic web architectures.

The philosophy behind the JAMstack is simple, but extremely powerful, consisting of two main concepts. First, is the idea of decoupling, which draws a hard line in the sand between the frontend and backend of an application. By doing so, frontend devs can primarily focus on the presentation layer of their product, rather than the backend server logic. Second, is the concept of pre-rendering. The idea is to load the entire frontend into static pages during the build process, which can then be served directly from a content delivery network (CDN) rather than an origin web server at the time of a user request.

The JAMstack is also quite literally a methodology for building. At its core, it is a way to create products on the web that uses Javascript (React is the most popular framework, but the JS ecosystem rapidly changes), third-party APIs, and markup (i.e., pre-rendered HTML that is served through a site generator). There are many other best practices typically associated with a “JAMstack” site, like running on a CDN and using more modern build tools and workflows.

Lastly, there are a set of tools that have emerged, which cater specifically (but not exclusively) to developers building web applications with these principles and methods in mind. You can think about this non-exhaustive market map as a workflow, from the conception of a website to its arrival in front of the end user:

Why Are People Excited about the JAMstack?

The JAMstack movement is one of the rare shifts in the software world that dramatically improves both the developer and end-user experience. When adopting JAMstack principles, organizations improve developer productivity, increase site reliability and security, and create a user experience that is more performant and personalized.

Simply put, JAMstack eliminates significant noise on a developer’s periphery that takes their attention away from building the core product. Developers building on JAMstack can focus more of their time building a compelling user experience, and less time on the complexities of enabling that experience. They spend less time learning and maintaining backend server logic, and ensuring that the application scales with user traffic. This ultimately increases developer cycle time and allows organizations to deliver better experiences faster to their customers.

JAMstack sites are also more reliable and secure. Because these sites decouple their frontend and backend, developers no longer have to worry about monitoring backend servers, as API providers and CDN providers handle the necessary provisioning to ensure sites scale with user traffic. Additionally, sites no longer rely on a central CMS like Drupal or WordPress, which are often the target for malicious hackers. Lastly, because these sites are built using a collection of third-party API services rather than a monolithic beast, it is easier to identify issues and debug them.

From a performance perspective, web experiences built in the JAMstack paradigm deliver much faster load times for the end user. When content is pre-rendered and cached on a CDN, it obviates the need for the user request to travel back to a central server, process the request, and send back the data. It is delivered almost instantaneously to the user, eliminating significant latency in the experience. We’ve seen many instances where shifting to the JAMstack can improve site performance by as much as 10x.

Where Is This Going? (A Few Predictions for the Future of the Web)

The JAMstack is just the beginning of a massive transformation in how developers build on the web. We believe the evolution of this trend will have far-ranging implications, a few of which we’ve detailed below. 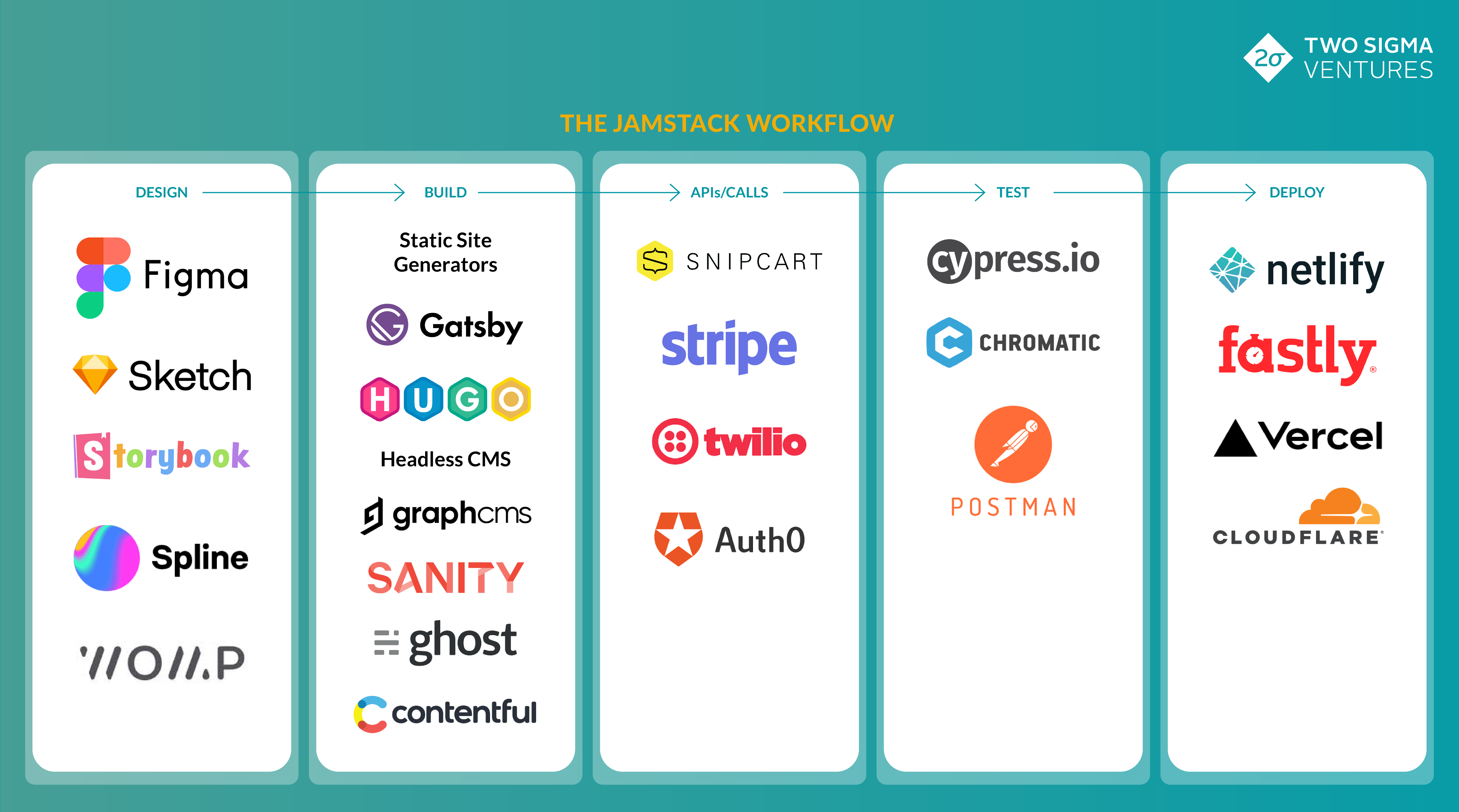 Overall, we are thrilled about all the possibilities that the JAMstack will enable for developers and consumers. Though we are still in the early stages of the technology and framework being adopted, we are confident it will result in faster, safer, and more compelling web experiences. If you are an entrepreneur building in this space we would love to speak with you.