The Kilogram Is Dead, Long Live the Virtual Kilogram 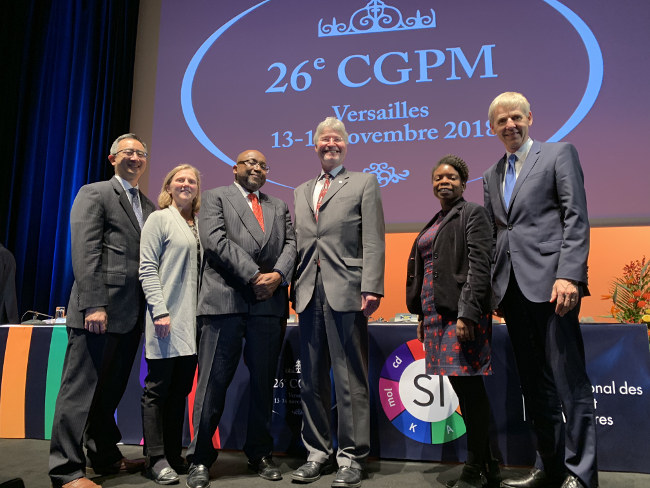 It’s finally happened. On Friday humankind made its grand leap forward from our object-bounded history into an inspiring new level of scientific precision, as the world’s metrologist finally swapped in a more scientific definition for the exact mass of a kilogram.

But as the moment finally arrived, several paused the consider the echoes of our past that are finally being shed on the roadside of history — and the deep cultural significance of the change we’re committing.

Of course, it wasn’t just the kilogram. On Friday ABC News reported that that high-minded gathering in Versailles also approved small changes to definitions of other units of measurement — the Kelvin (for temperature), the ampere (for electrical currents) and the mole (used for quantities of atoms or molecules). “The vote was greeted by sustained applause and cheers, after the 50-plus countries in attendance said yes or oui when asked one by one for their decision.”

The building anticipation began to build online, with various noble attempts to explain exactly how (and why) humanity’s measurements are all derived from a set of “Système International (SI) unit definitions” from France’s Bureau International des Poids et Mesures.

3/ It's actually not! For all units (even the imperial units used in America) the answers all end with the Système International (SI) unit definitions established and maintained for over 100 years by the Bureau International des Poids et Mesures (BIMP) in France.

The same precision was eventually applied to our definition of the meter — and, in fact, to every unit of measurement except the kilogram.

14/ For 129 years, the kilogram has been defined as just the mass of a physical artifact stored in a vault in France (called the International Prototype Kilogram, the IPK).

Image credit: "The State of the Unit" pic.twitter.com/R9a4CQwdZ1

It’s still based on this International Prototype Kilogram (or IPK) — which Reuters describes as “a lump of dusty platinum and iridium.” (Its nickname? Le Grand K.) It’s locked in a safe which can only be opened with three different keys (carried by three different people), according to the Washington Post. Once every 40 years the nations of the world check their copies against the Paris original. Over the last 139 years, it’s been accessed less than 12 times.

But this physical totem is plagued with imperfection, according to Reuters. “[D]espite the metal being kept in carefully-controlled environments, Its weight does change over time. Too much for it to still to be considered totally accurate.”

17/ (So yes, if some careless technician accidentally chipped some metal off the IPK, then the weight we ascribe to atoms would go up. The IPK *always* weighs 1 kg by definition).

Fortune jokes that “For decades, scientists have known that the kilogram has a weight-loss problem.”

Even in its temperature- and humidity-controlled case, “the platinum picks up pollutants from the air and the cylinder gets ever so slightly heavier,” explains the Guardian. “When it is cleaned, the kilogram loses weight as tiny amounts of alloy are removed. The net effect is hard to gauge, but copies can put on tens of micrograms in a century. All scientists know for sure is that the kilogram that defines all others is not what it used to be.”

Back in 2002, one official at the “mass” section of the international standards bureau noted that even weighing it meant that very tiny bits of the grand kilogram would flake off just from bumping against the scale.

And of course, it’s a problem if your one true standard of mass seems to be spontaneously changing.

So for years metrologists have been quietly pushing to re-define it using the immutable laws of physics that govern our universe — in this case, using Planck’s constant. “If that sounds complicated, it’s because it is,” quips Reuters.

Wikipedia defines Planck’s constant as “a physical constant that is the quantum of action… A photon’s energy is equal to the Planck constant times its frequency.” But more to the point, precisely measuring Planck’s constant requires “rare and expensive” tools, explains the Washington Post. In fact, to this day there are only two “watt balances” in the world powerful enough to perform the calculation with the required level of precision. One, at America’s National Institute of Standard and Technology (NIST), took over five years to build. It uses a one-ton magnet, and it’s housed inside a carefully-controlled vacuum.

“The apparatus works by balancing the force of gravity pulling down a 1-kilogram mass against an upward-pulling magnetic force,” explained a 2002 Washington Post article. The device can indirectly define the kilogram because all the other units measured — such as time, length, voltage and resistance — are already precisely defined.”

One person who’s tried to understand this complexity is Derek Alexander Muller. As the son of an engineer — and an aspiring film-maker — with a degree in engineering physics, Muller started the science-documentary channel Veritasium on YouTube. (And eventually became a correspondent on the Netflix web series Bill Nye Saves the World.) In 2017 he paid a visit to America’s National Institute of Standard and Technology (NIST), in Gaithersburg, Maryland, where a team was scrambling to perform the final base calculations that would be necessary for our new definition based on “unchanging constants of the universe.”

On June 30, 2017, a NIST team led by Maryland metrologist Jon Pratt was finally able to measure Planck’s constant with an uncertainty of less than 20 parts per billion — that is, within 0.000002 percent — providing the needed base unit for a re-definition of the kilogram. “Here in the echoing basement of an obscure federal agency, he and his crew of hair-netted nerds had gotten as close to one standard for perfection as any human has ever been.” Pratt even tattooed the resulting number on his forearm.

“I’m just really proud of our species,” Pratt told the Washington Post, adding that the moment was “emotional.”

With this new definition, researchers can finally pass on their newly-discovered precision to future generations. “In this era of violence and vitriol, when it seems there’s so little on which people can agree, Pratt said, the redefinition represents something sublime. It is an acknowledgment of an immutable truth — that nature has laws to which all of us are subject. And it’s one more step toward a lofty dream — that, in understanding nature’s laws, scientists can help build a better world.”

Stephan Schlamminger, a physicist at NIST, jokes the current system would be hard to explain to aliens. “If we say our unit of mass is based on a lump of metal we keep in Paris, we’ll be the laughing stock of the universe,” he said.

But like everyone else, he recognizes this as a monumental moment. “I’ve been thinking about this, or working on it, for as long as I have been a scientist. Sometimes I am in a state of disbelief. Is this really going to happen? Will I wake up and find this is all a dream?”

The new definition won’t go into effect until May 20th — but it’s been a long time in coming, and anticipation has been building. Even back in 2002, the Washington Post was writing that “Whatever the new kilogram standard turns out to be, it must hold true for the next 100, or 1,000, or 10,000 years for measurers. It mustn’t depend on a single thing sitting in a vault in Paris. And it must be reproducible anywhere in the world.

It’s taken centuries for international standards to reach this level of precision. Britain’s foreign secretary even assembled a whole set of weights in the early 1800s just to indicate the standard units of measure in various countries, reports Oliver Morton, a senior editor at The Economist. Morton writes that the collection — now housed in the London Science Museum — “evinces a worldly acceptance of human disparity and vagary.” Britain had watched as France tried to establish one universal system after the French Revolution, and then another when Napoleon came to power. “Whether it was in weights and measures or the rights of man, such universalism was deeply suspect. That His Majesty’s government should know for sure what the foreigners were talking about was quite sufficient,” Morton writes. “In the 200 years since, though, the world has slowly come to prefer highfalutin’ Gallic universalism to pragmatic British interoperability.”

He points out the kilogram is the official unit of mass in every country of the world except Liberia, Myanmar, and the United States. And yet the kilogram is also the last of its kind — the last vestige of a time when humankind based its measuring on tangible objects. The brightness of light was once measured in standardized units derived from the light of a candle made of whales-head wax, burning at a specific rate, Morton points out. With our re-definition of the kilogram, “All this history and specificity is now washed away.”

Morton writes wistfully about the grandeur of the moment, with our species now “abandoning measures that have stories, measures that can be secured in comforting boxes, old measures from and of the human world, in favor of the unyielding, inhuman constants of the uncaring universe.”

But in the piece, titled “The inevitable, tragic — and ultimately necessary — death of the kilogram,” Morton also ultimately seems philosophical. “If humankind cannot agree on universal rights, it can at least agree on universal amperes, defined only by the behavior of any cesium atom and the charge on any electron.

“It is hard not to think us a little grander as a result. ”

Feature image: The U.S. delegation at the 26th General Conference of Weights and Measures where more than 55 countries voted to redefine four of the seven base units for the International System of Units (SI) (NIST).