The Logistics of a Manned Mission to Venus

NASA has concluded that "Venus, with its relatively hospitable upper atmosphere, can play a role in humanity's future in space."
Oct 28th, 2018 6:00am by David Cassel 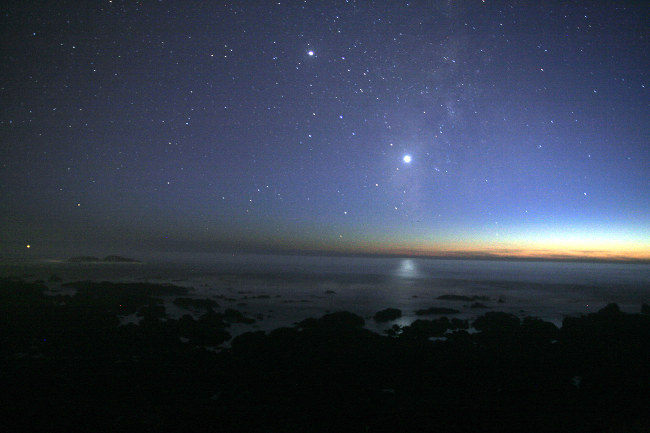 It seems like every day we’re grappling with difficult logistics and deployments as we fearlessly pioneer our way into cutting-edge technologies. But this week saw a new reminder about some even more awe-inspiring achievements that humankind may one day achieve.

Two U.K.-based academics reminded the world of NASA’s explorations into the possibility of manned missions to the skies of Venus. The idea, they wrote, “is not to land people on the inhospitable surface, but to use the dense atmosphere as a base for exploration.”

Back in 2014 NASA’s Langley Research Center published a video titled “A Way to Explore Venus,” calling Venus “our nearest planetary neighbor.” Venus is roughly 23 percent closer than Mars — a mere 25 million miles from earth at its closest approach to earth — which happens once every 584 days. This means the optimal “mission opportunity window” for a trip to Venus occurs once every year and a half — versus every two years for Mars — and NASA has acknowledged that a journey to our nearest planet would be quicker than a mission to Mars.

Enjoyed @NASA's @astraughnomer talk about the promise of the Webb Space Telescope. In the meantime, this Hubble Telescope picture of the planet Venus passing in front of the Sun is awe inspiring. #zeitgeist18 pic.twitter.com/gyNxJZr162

The downside? The surface of Venus has a temperature of 863 degrees Fahrenheit, and scientific explorations of the planet’s surface “found Venus to be a hellish wasteland,” one NASA paper reported. “The surface pressure under the massive atmosphere is 92 times that of Earth’s with surface temperatures upward of 735 Kelvin, well beyond what is necessary to melt most electronics and metals, with a weather system based on the movement of sulfuric acid.” 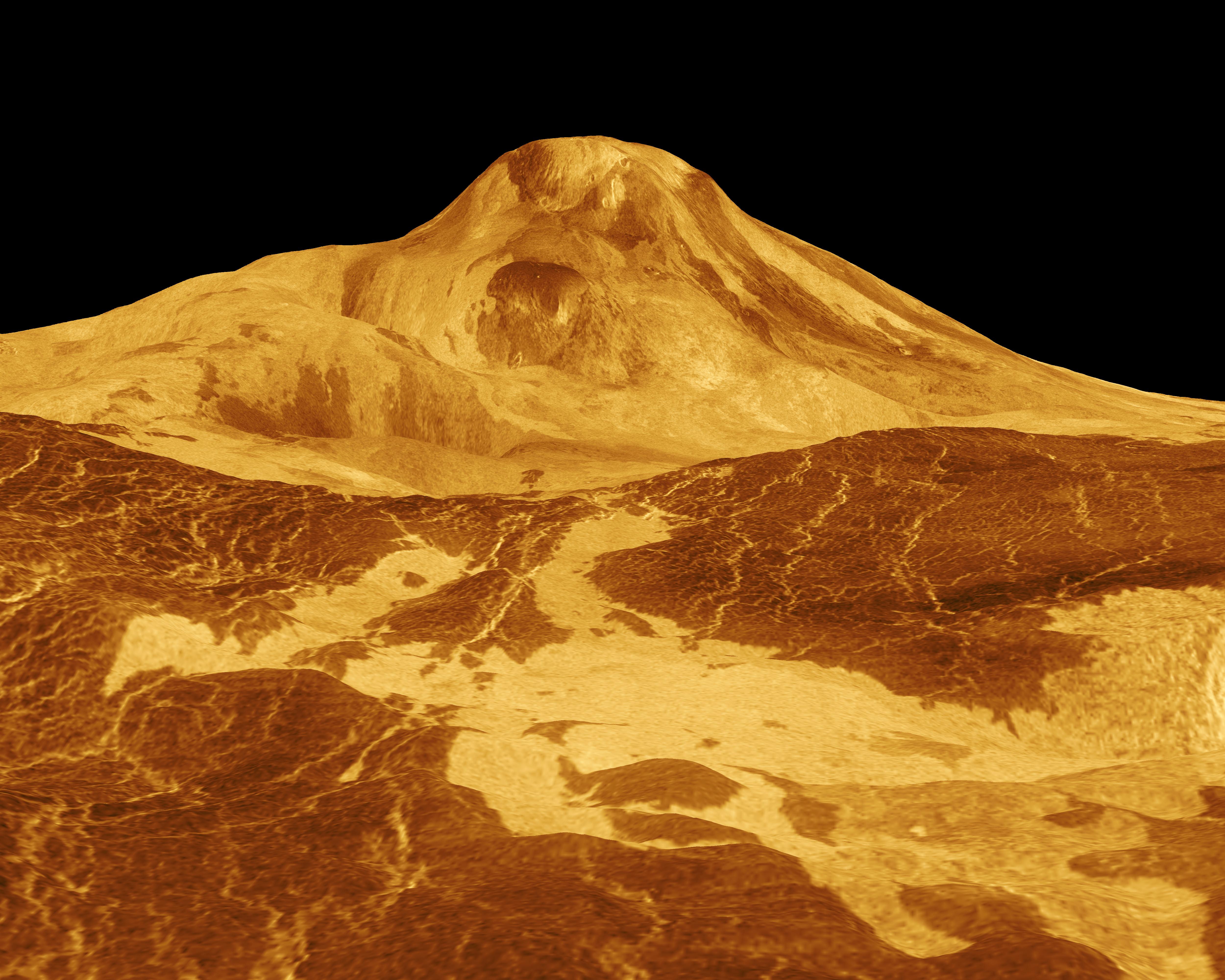 Venus has more volcanoes than any other planet in the Solar System, with 65 percent of its surface covered by volcanic lava plains. (Simulated hues based on color images from a very short-lived Soviet probe.) Scientists describe a “runaway greenhouse effect…”

Yes, sulfuric acid. One NASA web page actually describes the “thick clouds of sulfuric acid that completely cover the entire planet,” creating a kind of super-greenhouse effect that over the eons has turned Venus’s surface into one of the hottest places in our entire solar system. In 1981 Russia launched two Venus probes which culminated their four-month trip to Venus by surviving for exactly 127 minutes on the surface of the planet — exceeding their planned design life of 32 minutes.

But 34 miles above the planet’s surface, the “haze layer” thins out, the sun shines through, and there’s a pleasant drop in the ambient levels of sulfuric acid.

“As surprising as it may seem, the upper atmosphere of Venus is the most Earth-like location in the solar system…” wrote the two U.K.-based academics. “The atmospheric pressure in the Venusian atmosphere at 34 miles is about half that of the pressure at sea level on Earth. In fact you would be fine without a pressure suit, as this is roughly equivalent to the air pressure you would encounter at the summit of Mount Kilimanjaro.

“Nor would you need to insulate yourself as the temperature here ranges between 68 degrees Fahrenheit and 86 degrees Fahrenheit. The atmosphere above this altitude is also dense enough to protect astronauts from ionizing radiation from space… [C]onceivably you could go for a walk on a platform outside the airship, carrying only your air supply and wearing a chemical hazard suit.” And since it’s closer to the sun, solar energy cells actually generate 1.4 times more power than they would on earth.

It’s even been suggested that humanity try building 30-mile-high mountains on Venus, using autonomous robot bulldozers, to create a lovely mountain-top peak for settlement. One NASA researcher also cites two different NASA papers which “both call for exploration, habitation and potential colonization of Venus above the haze layer, where breathable air (20 percent oxygen, 70 percent nitrogen) is a lifting gas and the atmosphere is Earth-like in quality.”

NASA’s investigations into a manned Venus mission happened more than two years ago — but they were given a new round of attention this week in an article published on the news the Conversation. And the thought-provoking article was published under a Creative Commons license, so soon it had been republished by many other media outlets as well. Humankind appears to have a lot of pent-up curiosity about our nearest planetary neighbor.

One of the article’s co-authors is Ian Whittaker, who earned his PhD in 2010 looking at how the Sun interacts with Venus’s upper atmosphere, and currently teaches astrophysics at Nottingham Trent University. More importantly, he’s interested in “space science outreach,” which he describes in an online author profile as “encouraging students and the public to take an interest in how our planet interacts with the solar system.”

He teamed up with Gareth Dorrian, who also earned a PhD studying the sun — to write about humanity’s 60 successful missions to the moon, “including eight that were manned,” in an article presenting “Five reasons to forget Mars for now and return to the moon.” It seems like now they’re urging readers to forget Mars for now and focus on Venus — although at least one paper by a NASA researcher described Venus missions as a “stepping stone” to Mars, serving as “a test case for operations to/at/from another world.”

Glad my PhD knowledge has finally been used! Our latest article about a manned concept mission to Venus https://t.co/LvVPDla20N via @ConversationUK

NASA did an internal study about missions to Venus, and then followed it up by developing an “evolutionary program” for exploring Venus, “with focus on the mission architecture and vehicle concept for a 30-day crewed mission into Venus’s atmosphere.” A website about the project links to a 75-page PDF file titled “An Exploration Strategy for Venus” — from a 2015 conference held in Pasadena by the American Institute of Aeronautics and Astronautics.

The 30-day visit to Venus would take over 14 months to pull off — involving a 300-day return trip after a 110-day “outbound trip.” Other details include an inflatable airship larger than a 747, to be deployed upon arrival in orbit around Venus, with solar panels across most of its upper surface, though there are serious logistical challenges involved in transporting enough gas to perform the inflation! 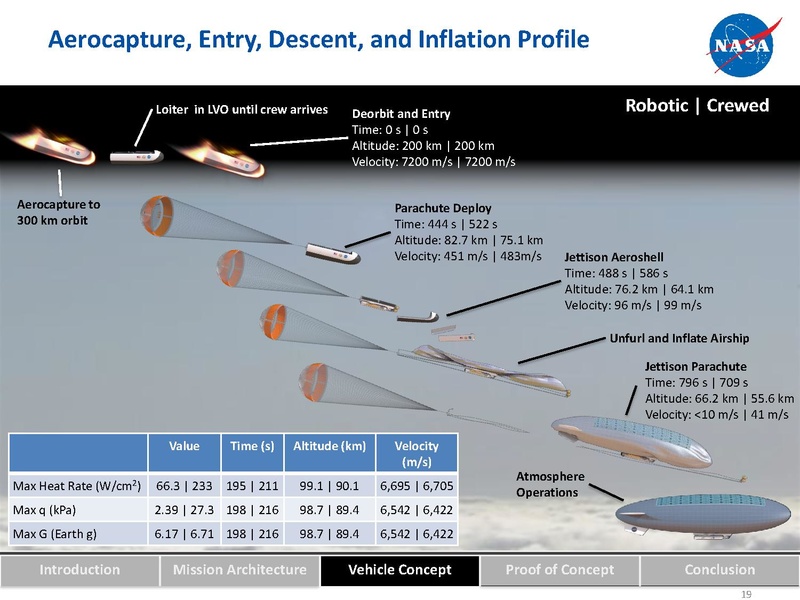 Floating above the surface of Venus, researchers could then deploy scientific research equipment to their heart’s content — paving the way for future explorers to this ad hoc floating city — before performing their long return flight back to earth. The idea has been dubbed High Altitude Venus Operational Concept (or “HAVOC”) — and it comes courtesy of NASA’s “Space Mission Analysis Branch,” the group charged with assessing the feasibility and inform NASA’s decision-makers while “inspiring the world of the art of the possible.”

One NASA team even built a model for a “heat-shielding aeroshell” which would surround all the components — including the “habitable gondola” at the base of the inflatable airship where the astronauts would live. They used off-the-shelf parts to monitor their 1/53rd scale model, including an Arduino Uno microcontroller, at one point using the gas bag from an advertising blimp, and cinching their inflatable airship with velcro straps. 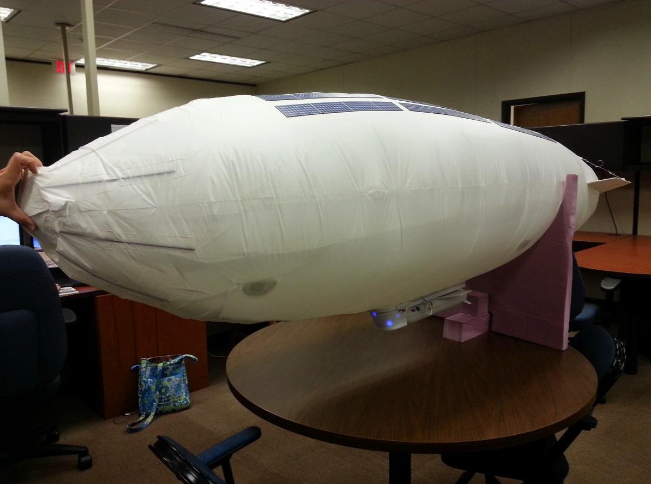 But the most interesting thing about this research is that it exists at all. Another NASA paper begins with an inspiring question — “What does the future look like?” — then lists the reasons humans explore space. And its second bullet point actually calls Venus “a destination for humans to reside,” calling it the nearest planet to earth — and the one with a hospitable environment. Not only does it envision a program of 14-month missions; that culminates with “Phase 5: a permanent human presence.”

Does NASA want to build a real cloud city above Venus? https://t.co/M0fhs7Bw3c pic.twitter.com/btKlw9JyOn

It lists two objectives, one a breakthrough and one a stepping-stone. Objective number one: “Demonstrate the ability for humans to survive and operate in deep space and around planetary bodies.” And objective number two: “Develop advanced technologies that will enable humans to visit planetary destinations.”

The two U.K.-based authors wrote this week that NASA “is currently working on a conceptual manned mission to Venus.” But shortly after their article appeared, NASA updated their web page to clarify that the project “is no longer active.” And while the two authors had written that “Such a mission is actually possible, right now, with current technology,” NASA writes more cagily that the missions will be possible “with advances in technology and further refinement of the concept.”

But it’s still inspiring to know that the mission has been seriously considered — and ambitious humans have already begun tackling some of the obstacles it might face. NASA’s researchers had identified “key technical challenges,” including “the threat posed by the sulfuric acid ambient in the atmosphere of Venus” — resulting in the follow-up paper in 2016 describing two “proofs of concept” to address them. For the sulfuric acid, researchers evaluated “candidate” materials, discovering that FEP-Teflon could maintain about 90 percent of the capacity of the solar panels, “even after 30 days of immersion in concentrated sulfuric acid.” That second paper also took a closer scientific look at how the airship would be deployed, and ultimately concluded that using airships to explore Venus is “feasible.”

“Venus, with its relatively hospitable upper atmosphere, can play a role in humanity’s future in space,” NASA concluded.

Venus is the 2nd brightest object in the night sky, the first being the Moon! #SpaceFacts (photo via @nasa) pic.twitter.com/3d234Q2rHj

SHARE THIS STORY
RELATED STORIES
WebTV in 2022? Vintage Tech Enthusiast Shows How on YouTube AWS Brings AI/ML Training to Community, Historically Black Colleges Engineering Leaders: Switch to Wartime Management Now How and Why to Respond to Incidents the Right Way It's No Longer about How You Write Code but How You Operate It
SHARE THIS STORY
RELATED STORIES
What Is a Sociotechnical Knowledge Map and Why You Should Care Snack Stack: If Programming Languages Were Desserts ... The Graph of Life in a Post-Relational World Case Study: How Dell Technologies Is Building a DevRel Team eBay: Betting on Open Source Is Great for Your Business
THE NEW STACK UPDATE A newsletter digest of the week’s most important stories & analyses.
The New stack does not sell your information or share it with unaffiliated third parties. By continuing, you agree to our Terms of Use and Privacy Policy.