The Ongoing Effort to Rescue a 1960s IBM Mainframe 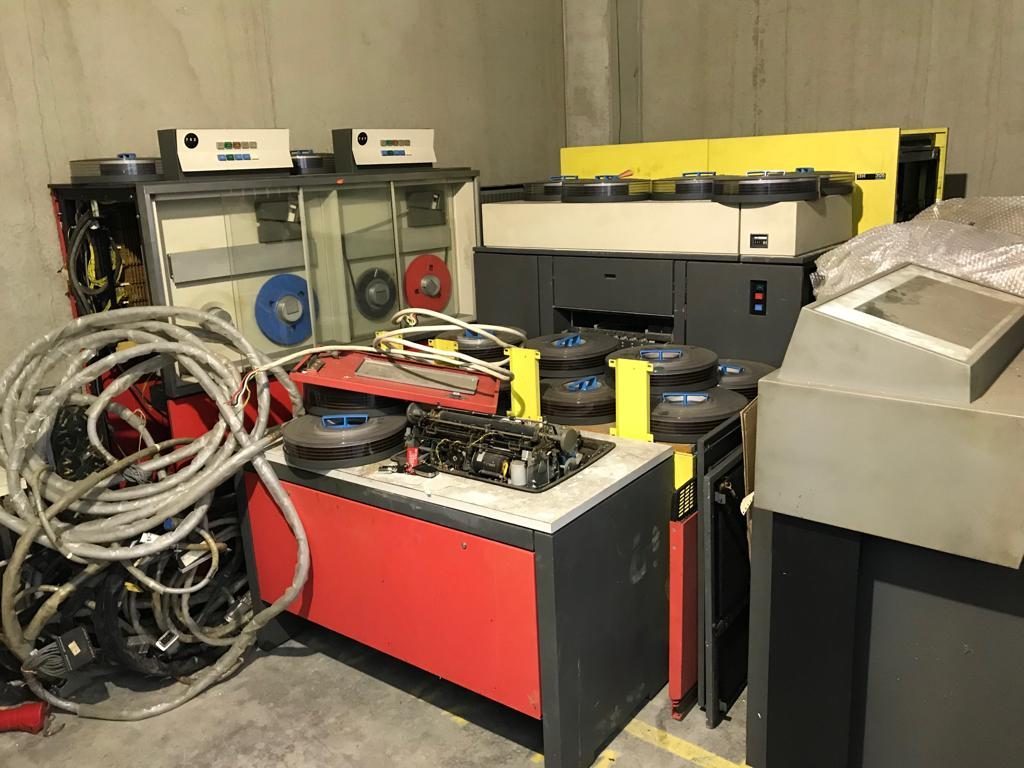 This week saw new updates to a story that’s captured the imagination of geeks everywhere. 24-year-old vintage computer enthusiast Adam Bradley managed to win an eBay auction for an IBM mainframe from the 1960s — then dealt with the logistics of trying to actually transport it overseas to a museum before the building it was housed in was destroyed by a wrecking crew.

We tracked down Adam Bradley for an update — and asked him what was so significant about the project.

“It’s not like collecting another PC where the hardware and software are standardized,” Adam told us in an email Thursday. “Engineering teams spent months and months designing this equipment by hand, building circuits and testing them, hand wiring backplanes, designing incredibly complicated mechanical items that I couldn’t imagine doing without CAD. I think it’s important to preserve that part of our history and be able to demonstrate it to the public, in the same way, it’s important to appreciate the steam train or the classic car… They come from a time of experimentation and deviation from the norm, and they show the origins of that part of our society today.

“Not only that, but the design is so beautiful and off the wall that it has to be observed in person to be truly appreciated.”

Adam and his collaborators are lovingly documenting their efforts on the “IBM 360 Model 20 Rescue and Restoration” website. (Bradley’s bio on the site says that for years he’s been involved in computer history field at The National Museum of Computing in Bletchley, England, while working by day as a railroad software engineer). In late April he’d been drinking in a British pub with his engineer friend Christopher Blackburn, who’s also involved with The National Museum of Computing, when the two spotted an eBay listing for a rare 1960s mainframe — “a once in a lifetime find” — in Germany. And when the bidding finished, they’d won the mainframe for €3,710 — about $4,141 USD.

Its core storage was somewhere between 4K and 32K bytes, according to a page where they explain the history of the IBM System/360 Model 20. Back in 1970, there were 7,400 of them in operation. (IBM sold the machines for $62,710, or rented them at $1,280.) Soon Adam had booked a flight, a hotel, and a rental BMW (plus a truck with a tail lift — and storage space), then headed to Germany to check out their purchase.

There it was, a red front panel with enormous tape drives, surrounded by random items in an abandoned building — tennis rackets and books about tennis, plus car wheels and pieces of wood — standing next to an IBM 370 model 125. “It had clearly been there for an exceedingly long time sitting gathering dust,” explains a page on the site (titled “Intended collection day and problems encountered…”)

Adam also bought dust masks, since “I’m assuming at this point the building is full of asbestos – better safe than sorry!” 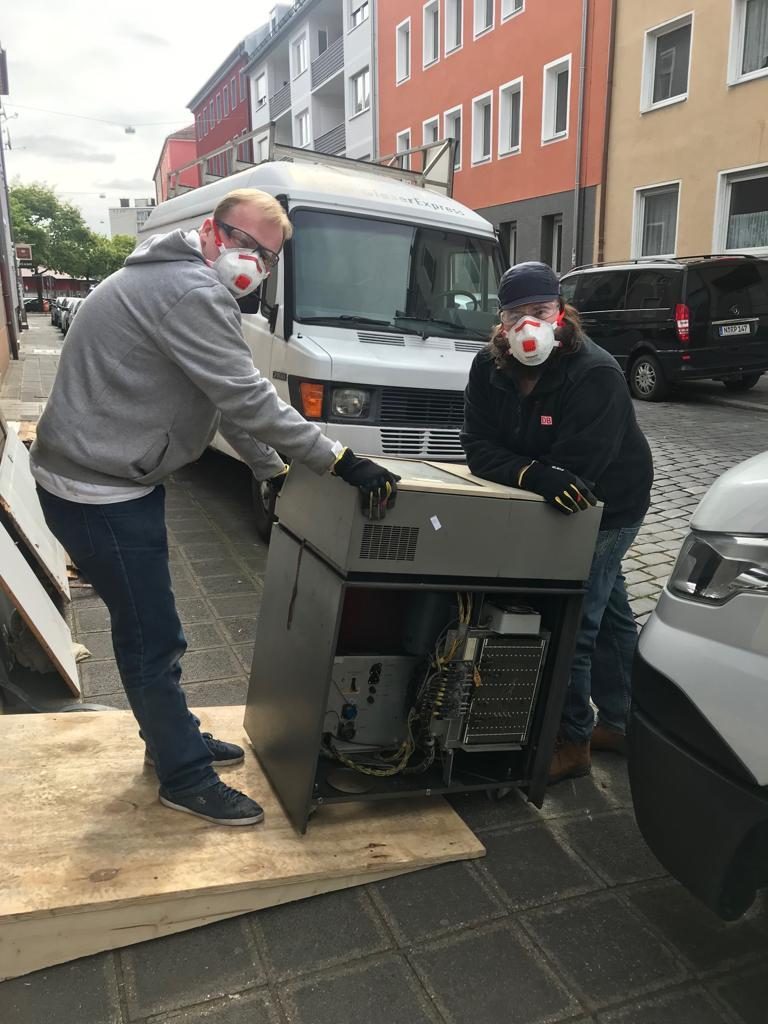 Soon Adam was joined by Chris (and his father John) for some much-needed
reconnaissance. But there was no way that mainframe was going to fit through the side door — and the only other door “had clearly not been opened since, at a guess, the late 70’s or early 80’s. Nobody had a key, and to worsen the issue the false floor in the building was built right up to the door blocking any way of opening it.”

The machine’s connected cables proved it had at one point in time been operational. (And they were thrilled to also discover some actual field engineering manuals.) But there were still going to be some other big challenges. These machines weigh up to 620 kilograms (1366 pounds), and over the years this one had actually sunk down into the damp wood floor. In the end, the team used inflatable “air bag jacks” to lift the machine and its heavy peripherals so they could slip boards underneath their wheels “to free them of their sunken floor divots.”

There was a second trip — a 681-mile drive with a van full of tools through the Euro tunnel and on to Nuremberg — and May 15 was “moving day” (according to a page titled “the big move.”) The processor alone weighed at least 520 kg (1146 pounds), but “We managed to manhandle it out of the building, down the ramp and onto the truck.” 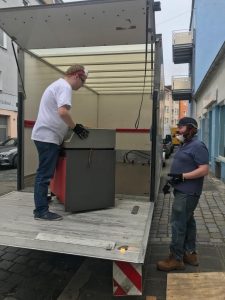 They also scored a disk drives, a 370 processor, and a machine and reader, “along with a bunch of random components like spare motors and power supplies,” plus a printer and teleprinter, some disk packs, and a system console. In fact, they ultimately had to rent a second storage unit for all the peripherals. (Their site explains that the team still isn’t sure about the exact specifications of their particular machine because “the machines’ location doesn’t currently really allow for in-depth investigations!”)

But when the big moment came, their work got progressively harder. “Everything left was, in some way, wired into each other under the false floor. The cables have been under there for over 37 years.” 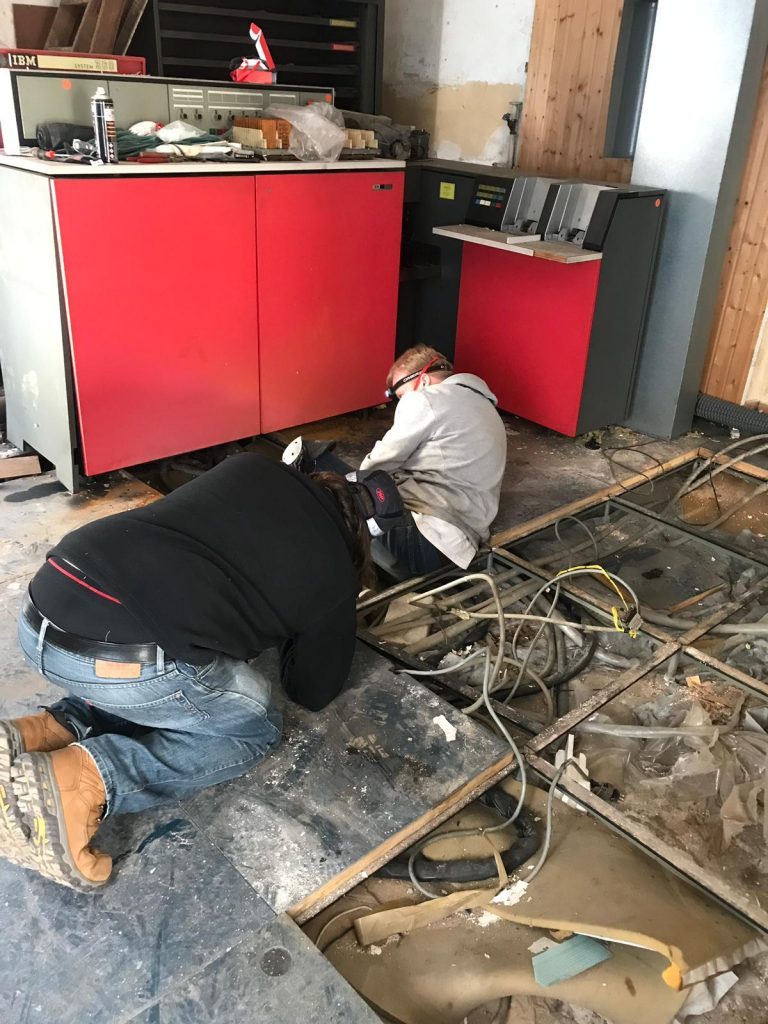 There was nothing to do but start unwiring things — starting with the teleprinter. Finding the cable for the master tape drive “involved pulling up most of the floor tiles.” Unplugging the processor “took us several hours to sort out due to the complexity of the cabling, it’s difficult location under a low floor, and the age of the cables.”

The third post ends with the mainframe safely stowed in its (two) storage spaces — with more work to come. “We’re planning to head back in a few weeks to document the machine more thoroughly and hopefully figure out the specifications of exactly what it is we have.”

But that post still ends with a cliff-hanger. “We’re currently in the planning stages of how to get it back to the UK from Nuremberg so if anybody reading this has any hauler friends who are coming back empty from Nuremberg please give us a shout!” Their “Get Involved” page has a few more details. “The machine will be located in a building with a raised floor and three phase power located near Aylesbury, Buckinghamshire. If you’re interested in helping us out feel free to drop us an email.”

And a page soliciting donations has more information — noting that their fallback plan is to raise money for a professional mover. (Estimated cost: 5,000 pounds or $6,330 USD.) “We have already spent a significant amount thus far and still need to fund the rent for the space to keep the machine, the restorations, etc. If we reach our target it will mean that we can move forward with the restoration at a faster pace and hopefully provide more updates!”

They’ve also set up a page for an online store where you can buy their home-made “IBM System 360” t-shirts, phone cases, and coffee mugs.

But last Sunday the team also launched a GoFundMe campaign to cover the shipping of the mainframe across the English channel, attracting over 100 donations in its first three days. “We’re so very grateful to our exceedingly generous donors who have donated an incredible amount of money over the last few days to help us get the machine back to the UK,” Adam told us by email.

Their adventures weren’t over. Wednesday the team posted about “an unexpected emergency return” to Nuremberg. Apparently, they’d extracted the machines just in time, as the roof began leaking over the weekend, “right onto where the punched cards and the processor had been stored!” But buried under a load of Porsche parts, some engineering manuals (and bits of IBM equipment) had been discovered — with more boxes labeled “IBM” discovered in the attic. The newly-discovered equipment included a blue 2501 punched card reader and “remnants” of a 5444 disk drive. (And upstairs in the attic were two IBM tapes, still in their original packaging, as well as “boxes upon boxes of brand new, unopened IBM punched cards.”)

There was also new time pressure to retrieve the artifacts — because wrecking crews were already gutting the building!

Adam told us that now they hope to store and maintain the machine in a former Mi6 building. “After that we’re going to start the cleaning process to remove the years of dirt and debris that currently coats the machine!

“Following that exercise, we’ll be conducting a full review of the state of the machines and documenting their condition. Following on from this we’ll be drawing up restoration plans which will initially include things like replacing the PCB capacitors in the power supplies with modern equivalents and testing the power supplies to ensure they’re in working order.” 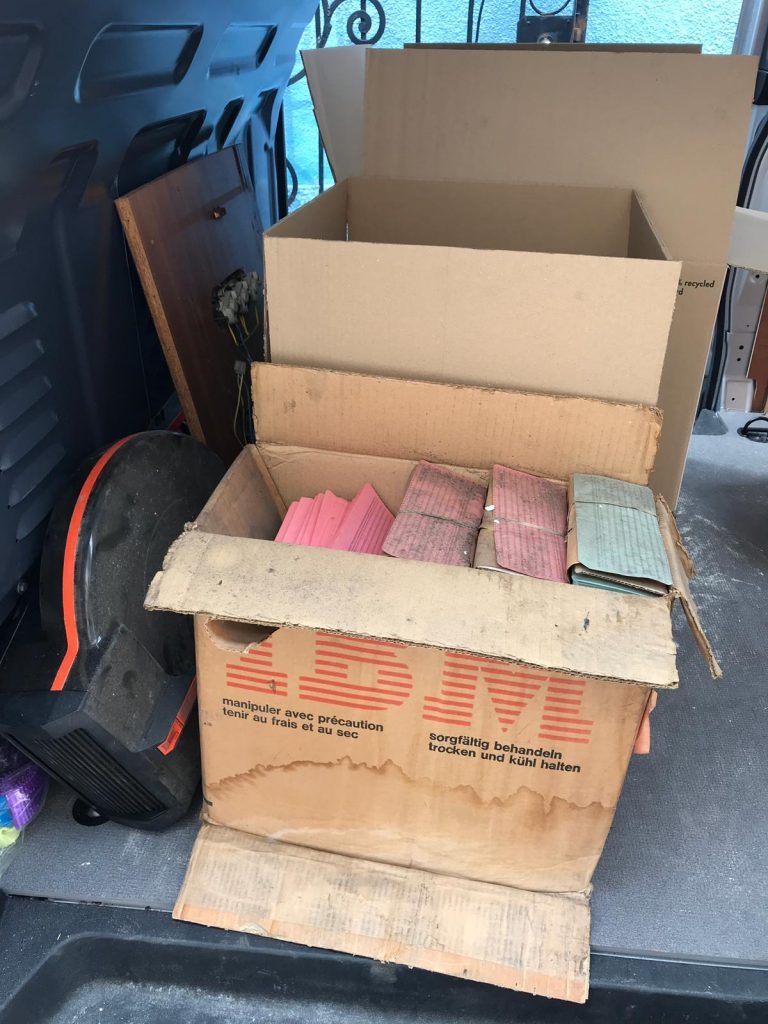 But, as he told The Register “Our current focus is on getting the machine here and digitizing the documentation. If anybody has a way to safely and slowly optically read 80-column IBM punched cards that would be extremely helpful. We also could do with access to specialized scanning equipment e.g. A0 Scanners and book scanners to digitize and share the full set of Engineering manuals we’ve got.”

But throughout the process, they’ve been buoyed by the support of their legion of invisible fans online. One commenter on their GoFundMe page appeared to come from a long-time programmer who said that the project brought back some long-ago memories from middle school about a similar machine — and the impact it had. “It got me hooked. Got me a career that’s spanned my entire life.

“Gratitude is due someplace — and here is as good as any!” 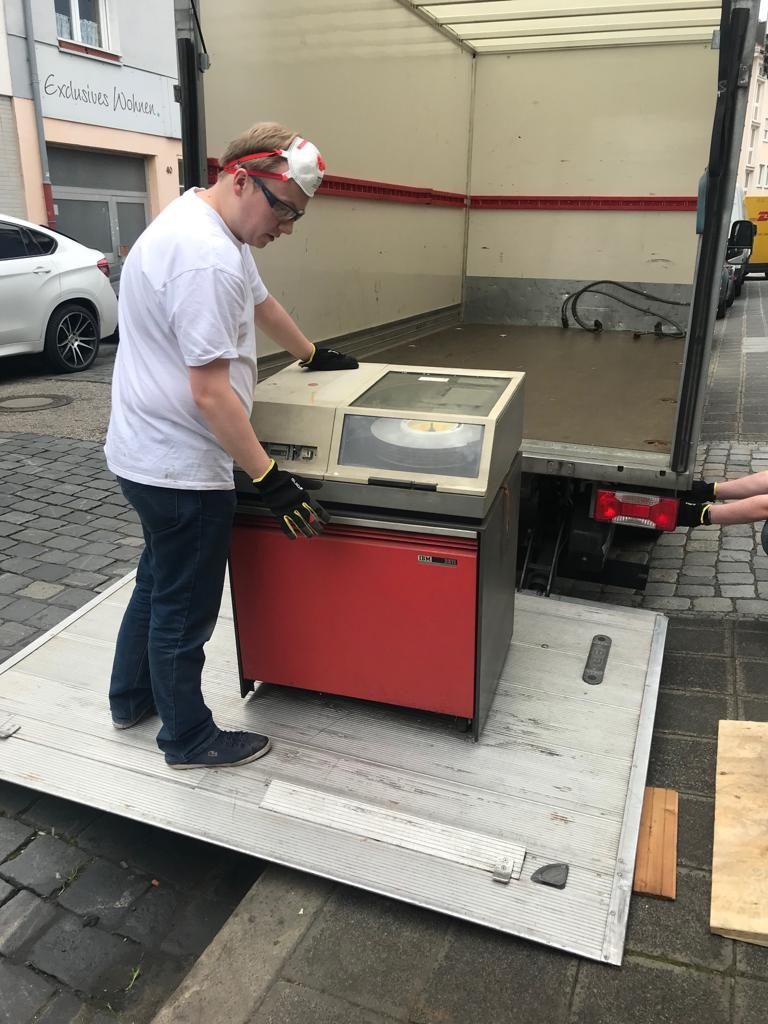