The Open Book Project: An eBook Reader You Can Build Yourself

An amateur hardware enthusiast wants to prove it's possible for people to build their own ebook readers.
Feb 2nd, 2020 6:00am by David Cassel 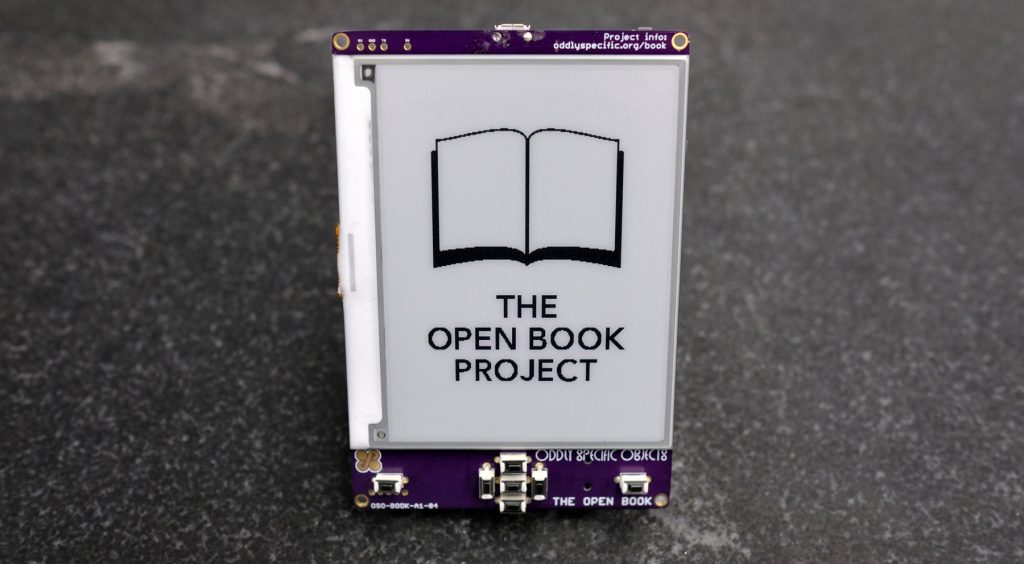 An amateur hardware enthusiast wants to prove it’s possible for people to build their own ebook readers.

“As a society, we need an open source device for reading,” explains the project’s page on GitHub. “Books are among the most important documents of our culture, yet the most popular and widespread devices we have for reading — the Kobo, the Nook, the Kindle and even the iPad — are closed devices, operating as small moving parts in a set of giant closed platforms whose owners’ interests are not always aligned with readers’.”

“The Open Book aims to be a simple device that anyone with a soldering iron can build for themselves.”

It’s an inspiring example of a one-person project realizing its grand dreams by drawing on the work of the open source community. “One person can’t make an open-source ebook reader,” acknowledges Joey Castillo, the man behind the project, in a recent episode of Adafruit’s “Show and Tell” on YouTube. “I was leaning on so many open-source libraries, and learning from so many open-source schematics.”

And last week on Twitter, Castillo uploaded a short video showing an early prototype of his ebook-reading software – along with an attractive home-built wooden case

For more detail about the state of the book, I made a 90-second video showing and explaining the (very) simple software for book reading, so far. As a side note: zeroing in on a wooden case design! Stained, laser-cut 1/16" basswood + nylon screws. Need to try some hardwoods next! pic.twitter.com/2sfoBqNnTW

Castillo is envisioning a seven-button device with a 4.2-inch screen. “A 400 x 300 black and white e-paper screen enables the core experience of, y’know, reading,” explains the project’s web page on Hackaday.io. To keep costs down, Castillo’s prioritizing inexpensive components, but the device’s specs include a SAMD51J19A microcontroller and an ARM Cortex M4 processor (with 512 kilobytes of Flash and 192 kilobytes of RAM), plus 51 GPIO (general-purpose input/output) pins.

There’s even a Micro SD slot for external file storage. The project page notes that an offline copy of Wikipedia fits in just 64GB.

And in a late-December update, Castillo posted that he’s also trained a TensorFlow Lite model to recognize voice commands on the microphone input.

The larger hope is to build an e-reader that’s easily extensible, and one that supports every written language. But “Most of all, it should be open,” adds the GitHub page, “so that anyone can take this design as a starting point and use it to build a better book.”

Wow. It's funny that today I'm trying to solve the problem of saving a user's current page in a book; my solution was going to be a table with a column for "book", and a column for "current page". Why on earth would you need a UTC timestamp of every page tap going back two years? https://t.co/QvrJ6ZnLBc

The e-reader’s GitHub page also expresses a hope that the versatile board may find other uses. With its stereo audio output, “you could turn it into a music player or voice memo recorder; use the STEMMA ports to add sensors and turn it into an air quality monitor; plug in an AirLift wing and have it display sports scores or transit alerts. I’m really curious what uses folks will come up with.”

Castillo emphasizes that he’d envisioned the reader as a DIY project — that he’d been wanting to make it possible for others to also build their own ebook readers. Since people keep asking when his device will be ready, Castillo posted Thursday in his project’s log page. And he writes, linking to the project’s page on GitHub, “there’s a part of me that feels like hey, it’s here, if you want it!”

“Every major component on the back of the PCB has a small description of its purpose and in some cases even a breakdown of the pin assignments. The idea being that it not only makes the device easier to assemble and debug, but that it can also explain to the curious user what everything on the board does and why it’s necessary.”

Or, as the project’s page explains it, the board’s silkscreen “aims to demystify the Open Book’s own design, breaking down for the curious reader both how the book works, and how they can build one for themselves.”

He’s now planning to share the series of smaller projects he’d practiced on to work his way up to the reader. “The goal is for each one to teach some aspect of the skills needed to build the Open Book at the other end…. if I’m being honest with myself, there was a time when I could not have built the Open Book, and if I’m going to say ‘You can build it,’ maybe I need to take you along on the journey.”

So how close are we? According to its GitHub page, the reader is now 99% done, with just one lingering hardware issue: When the headphones are plugged into the USB port, there’s a small buzzing sound, since “the USB cable’s shield acts like an antenna, picking up RF noise from the environment. I plan to address this with an RC filter between the USB shield and the ground plane.”