The Open Source Lesson of the Linksys WRT54G Router

How a budget WiFi router gained an unlikely second life as a hacker device, all through the power of the open source GPL.
Jan 24th, 2021 6:00am by David Cassel 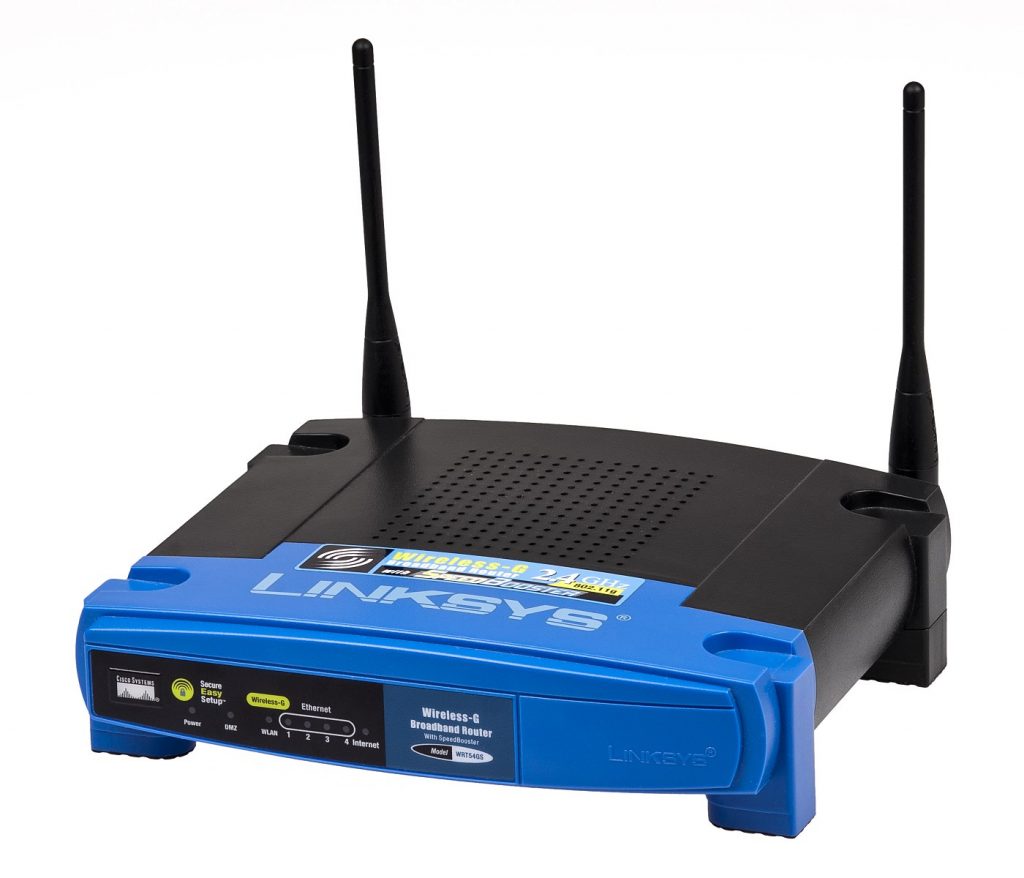 The remarkable case history of Linksys is a success story with a twist. It was a company that one analyst said “invented” consumer home networking, according to Inc., before it was acquired in 2003 by Cisco for half a billion dollars. But that triumphant moment also revealed what became one of history’s most famous violations of an open source license, which ultimately forced Cisco to release the firmware for the WRT54G router.

Yet in the end, this seems to have led the router to an even more enduring popularity — and a lot of fond memories. But is there also a lesson there about how much good can be generated by open sourcing your software (maybe even for Elasticsearch)?

A new wave of nostalgia was prompted by a recent article on Tedium.co, a site promising its readers “the history of things that usually don’t have histories written about them.” It remembers the Linksys WRT54G router as “the blue-and-black icon of wireless access… the wireless router that showed the world what a wireless router could do.”

Linksys had started in 1988 with a product that connected PCs to printers with cables, and a 2004 article in Inc. magazine describes how Linksys had eventually started to break through with its four-port broadband router. In 1994, just before the dawn of the internet age, Linksys’ annual revenue was $6.5 million, Inc. remembers — but by 1998 it had grown to $65.6 million.

Ars Technica once interviewed Linksys employee #41, Karen Sohl. Sohl had joined Linksys in 1999, with many roles (including public relations) that by 2016 had led her to become director of global communications for Belkin, which had acquired Linksys in 2013. But she still remembered a fateful appearance at Comdex in 1999, when Linksys was proudly touting a product that they were calling the Integrated Internet Hub.

“We were at the show and Bill Gates came by our booth… and he said, ‘why don’t you guys just call this a router?'”

Linksys ultimately re-branded it as the Broadband EtherFast Router – and the next four years were even more successful. Inc. magazine reports that by 2001 Linksys had revenue of $346.7 million and a 34.2% market share (rising to 49% by 2003). So while Linksys was founded in an Orange County garage, it eventually spent seven years on the Inc. 500 list before being acquired for half a billion dollars by Cisco in 2003. Inc. calls the tale of the company’s formation “an immigrant story of hard work and calculated risks.”

A Surprise in the Firmware

But in her interview with Ars Technica, Sohl still remembered the popularity of Linksys’ first WRT54G in 2002. “That product really is what made the company.”

But shortly after Cisco’s acquisition, software engineer Andrew Miklas (later the co-founder of Pager Duty and an entrepreneur/investor) contacted Linksys and made a fateful discovery. Linksys’ firmware seemed to be incorporating several products from the Free Software Foundation which had been released under a GPL license (which requires their source code to always be freely available). A 2005 column in Linux Insider pithily described Cisco’s predicament: “In the trade, this is known as ‘buying a lawsuit'” — though they also acknowledged that it was a complicated stack of technologies. While Cisco now owned Linksys, Linksys had been buying its chips from Broadcom, “and Broadcom also presumably did not know, because it, in turn, outsourced the development of the firmware for the chipset to an overseas developer.”

“To discover the problem, Cisco would have had to do diligence through three levels of product integration, which anyone in the mergers and acquisitions trade can tell you is just about impossible. This was not sloppiness or carelessness — it was opaqueness.”

A 2003 article in Linux Devices got an equally charitable response from Open Source Initiative co-founder, and open source software licensing expert, Bruce Perens. “This is not really Cisco’s fault,” Perens explained. “The GPL violation did not originate at Cisco, or Linksys. An off-shore subcontractor supplied Linux as part of the device.”

Perens noted later that “Subcontractors, in general, are not doing enough to inform clients about their obligations under the GPL,” though he also seemed to have some sympathy for engineers at small companies forced to interpret GPL themselves without lawyers conversant in U.S. software law. “Contractors will think ‘this is embedded, no one can change the source — so the GPL must not really apply to us.'” Perens even said he had contacted Cisco, specifically to keep them from being frightened away from using Linux in the future.

After the acquisition, Cisco planned to release the source code for the router — though there were still issues to be ironed out. In 2003, Forbes pointed out that FSF had the pro bono services of Columbia Law School professor Eben Moglen, who’d said “his chats with Cisco have been friendly, and he believes the matter will be settled without a court fight.” But he was wrong.

Nearly five years later, in December of 2008, the Free Software Foundation had filed a copyright infringement lawsuit, arguing that “In doing so, Cisco has denied its users their right to share and modify the software.” Its announcement included comments from FSF founder and president Richard Stallman, who’d said “Our licenses are designed to ensure that everyone who uses the software can change it. In order to exercise that right, people need the source code, and that’s why our licenses require distributors to provide it. We are enforcing our licenses to protect the rights that everyone should have with all software: to use it, share it, and modify it as they see fit.”

Brett Smith, licensing compliance engineer at the FSF, added “We began working with Cisco in 2003 to help them establish a process for complying with our software licenses, and the initial changes were very promising.” But Smith complained that Cisco “never put in the effort that was necessary to finish the process, and now five years later we have still not seen a plan for compliance. As a result, we believe that legal action is the best way to restore the rights we grant to all users of our software.”

In the open source licensing world, it was historic. The FSF’s executive director Peter Brown said it was the first time since the group’s founding 15 years earlier that it had actually gone to court. But within six months they’d reached a settlement. Cisco agreed to appoint a Free Software Director to oversee its compliance with licenses going forward, who would report periodically to the Free Software Foundation. The company notified previous recipients of Linksys of their rights under the GPL. Most importantly, the company would make the source code available, and even make “a monetary contribution” to the FSF.

But the Tedium post remembers that the 2003 open sourcing of the router’s firmware had led to its use in software and hardware hacking projects. “[T]his opened up a world of opportunity, and third-party developers quickly added capabilities to the original hardware that was never intended. This was essentially a commodity router that could be “hacked” to spit out a more powerful wireless signal at direct odds with the Federal Communications Commission, developed into an SSH server or VPN for your home network, or more colorfully, turned into the brains of a robot.” Specifically, a 2008 Hackaday post details how a developer disassembled and modified the router into a miniature controller for a camera-equipped home robot — held together with rubber bands and zip ties.

Tedium believes the open source firmware “created a cult of sorts around the device by making it hackable and able to do more things than the box on its own might have suggested,” which also buttressed its reputation in the broader consumer market. “The result of all this is that, despite its extreme age and not-ready-for-the-living-room looks, it sold well for years past its sell-by date—in large part because of its reliance on open-source drivers.”

Last week sys admin Evan Anderson shared his own fond memories on Hacker News of finding the routers for sale in thrift stores. “They were great for having a little Linux-box to do oddball utility stuff — ad-hoc OpenVPN endpoints, caching DNS server, captive Wi-Fi portal controller. They were eerily solid for their built-to-a-price-point nature.”

And another reader commented that “I’m still using one WRT54GL 1.0 in a rural area. Because it just works and refuses to die.”

And Ars Technica got a similar response from Linksys employee #41, Karen Sohl. “Though it was a black eye for the company, Sohl said that ‘what could have been a really awful situation ended up being a positive, because it enabled us to do a lot of learning and get closer to the community.'”

To this day the router is still available on Amazon, and in 2016 Ars Technica noted that “Linksys continues to earn millions of dollars per year selling an 11-year-old product without ever changing its specs or design.” Linksys’ Global Product Manager Vince La Duca told the site, “We’ll keep building it because people keep buying it.” He attributes its longevity to reliability, name-brand recognition, and, yes, its open source firmware.