Saturday Cartoon: The Persistence of Destino 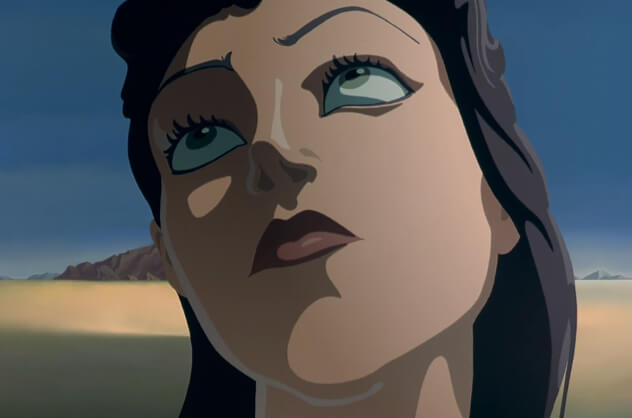 Here’s the story of how a five-year-old YouTube video of a 13-year-old cartoon from a 70-year-old idea suddenly gained a new life on social media in 2016.

The video is Salvador Dalí’s Long Lost Collaboration With Walt Disney. It’s a mysterious and haunting seven-minute cartoon full of bright colors and shifting shapes. A woman walks across a desert toward an enormous (and faceless) marble sculpture. Suddenly the woman is larger than the sculpture — is this a dream? — as she embraces it, shrinks it, and apparently disappears into a mysterious portal…

“In 1946, two legendary artists began collaboration on a short film,” explains a title card at the video’s beginning. “More than half a century later, their creation has finally been completed.”

The video’s description describes this as the story of Chronos, the mythological personification time itself from ancient Greece. Here Dali has gone beyond painting melty watches draped across tree branches. He’s telling a story about time itself!

It’s strangely appropriate that the cartoon is about time — since the project itself seems to have fallen through at least eight different decades.

“Destino is unique in that its production originally began in 1945, 58 years before its eventual completion,” explained an intriguing entry on Wikipedia. Disney studios decided the project wasn’t commercially viable — until two generations later when Walt’s 69-year-old nephew Roy finally resurrected the project with a small team of approximately 25 animators.

Using both hand-drawn and computer animation, they completed the seven-minute film, including the 17 seconds of footage that was completed back in 1946 — a surreal segment which involves two tortoises). It was released in theaters in 2003, and also nominated for an academy award for best short subject, and then screened at various Salvador Dali exhibitions. It turned up on a 2010 Blu-ray disk from Disney, as part of the Fantasia & Fantasia 2000 Special Edition.

What a combination, the famous Spanish surrealist painter — the king of the avant-garde — teaming up with Walt Disney, the animating everyman from the midwest who always seemed to have his heart on Main Street, U.S.A.

But of course, the real mystery is how is this available on the internet? When the video turned up on YouTube in 2011, its uploader was identified as a nondescript user named ‘JOnas3MokaQ.’ Maybe there really is a Disney copyright holder named JOnas3MokaQ. Or maybe Walt Disney’s copyright lawyers decided to call off the dogs because of the cultural importance of this once-in-a-lifetime artistic collaboration.

But whatever happened, there was one final twist. After 3.5 million views, the video is now being embedded on a site called Nameless.TV. It’s a site that’s still in beta, a New York-based startup (formerly NYC.TV) that was launched with funding from a Kickstarter campaign, according to TechCrunch.

The company “was supposed to recapture the ‘anything goes’ spirit of public access television by funding local video creators [but] the audience interest just wasn’t high enough,” and it’s now re-launching itself as a video aggregator with its own online “channels.” Its current selection of channels includes everything from “Weird Internet” to “Drone Tourism”, and even some video highlights from the Olympics in Rio.

And of course, the one-off collaboration by two of the 20th Century’s most influential artists.

SHARE THIS STORY
RELATED STORIES
Entrepreneurship for Engineers: Painkiller or Vitamin?  Fear and Layoffs: How to Cope with Tech’s Uncertain Times Devs and Ops: Can This Marriage Be Saved? How Security Champions Can Change Your Culture eBay: Betting on Open Source Is Great for Your Business
SHARE THIS STORY
RELATED STORIES
Collaborating with Internal Dev Experience and Tool Teams It's No Longer about How You Write Code but How You Operate It Case Study: How Dell Technologies Is Building a DevRel Team New Book Identifies 26 Lines of Code that Changed the World Low-Code Tools Improve Devs' Work-Life Balance, Survey Finds
THE NEW STACK UPDATE A newsletter digest of the week’s most important stories & analyses.
The New stack does not sell your information or share it with unaffiliated third parties. By continuing, you agree to our Terms of Use and Privacy Policy.