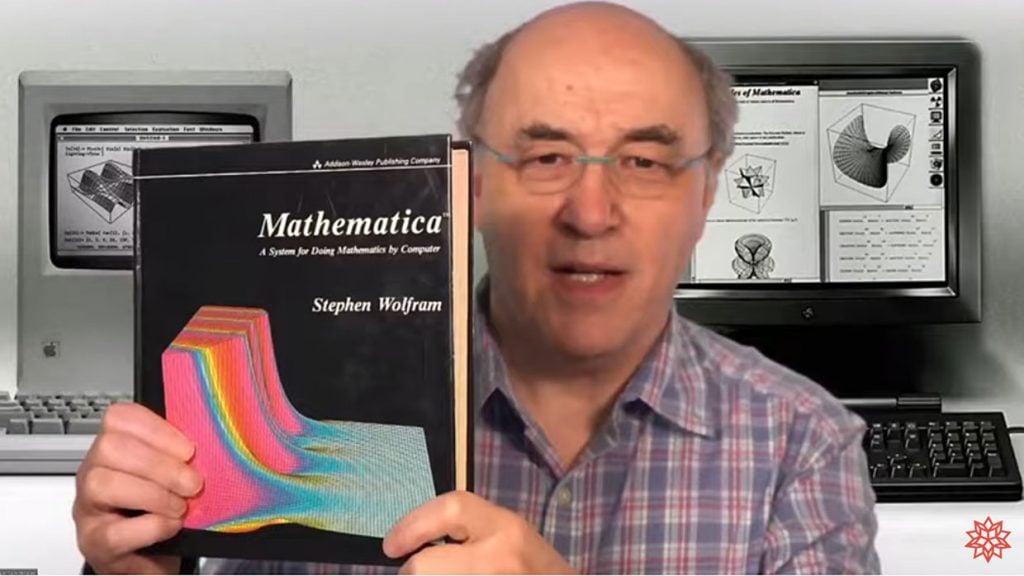 It was June 23, 1988 that Stephen Wolfram‘s company Wolfram Research launched Mathematica’s first version — “with some fanfare,” Wolfram recalled in a YouTube video (embedded below) since the announcement was made at a press event in Santa Clara, California.

The night before the launch event, he said, “We were still shrink-wrapping these boxes to make Mathematica available at neighborhood software stores — which were a thing in those days.” 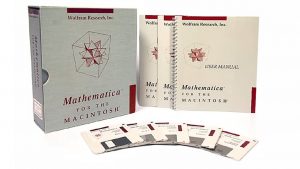 Circa 1988 Mathematica users manuals in analog form, with software on floppy disks.

The video chat was full of fun reminiscences about the early days of personal computing. But Wolfram also took the opportunity to look towards the future — as well as a deep dive into the history of computing, and even of mankind’s centuries-long quest for knowledge and understanding.

“In a sense,” Wolfram wrote in a celebratory blog post, “our goal with computational language is now to do something like the invention of mathematical notation, but for the much broader and deeper domain of computation—and thereby to enable a dramatic streamline of our ability to think in computational terms.”

Back in 1988: Support from Steve Jobs

Early in Wolfram’s video, he shared a slide showing an ancient 1988 headline from InfoWorld magazine about the launch of the Mathematica language — along with stories about the OS/2 operating system and trade-ins on IBM personal computers.

He recalled how a copy of the Mathematica book was signed by the great tech luminaries of 1988, including Andy Bechtolsheim (co-founder of Sun Microsystems), Digital Equipment Corporation’s Gordon Bell, and even 33-year-old Steve Jobs (then with NeXT).

At the time, the Mathematica language itself was running on “Macintoshes, some workstations, a variety of other computers” — including a computer from Jobs’ post-Apple company, NeXT. (Though that computer was still months away from its first public launch). Jobs had even encouraged Wolfram’s group to name the new language Mathematica.

There were more fun memories. Wolfram ended the video with a list of other names considered for the language — a print-out of a file created in a DOS text editor back in August 1987. Wolfram jokingly calls the slide “what might have been.”

Some of the names considered:

That list doesn’t include “impossible” product names that didn’t make the cut, including “Mathesourus,” “Mathdroid” and … “Igor.” 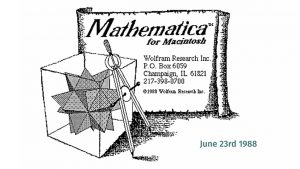 The original bootup screen for the Mathematica software.

At one point, Wolfram even shared a photo of the 1997 U.S. and European tour of the “Math Mobile, a roving demo center for the Wolfram language.”

But on a more serious note, Wolfram argued that, early on, the language saved its adopters from their darkest fear: “That they would always delegate the process of computation to somebody who would be down in the dungeon somewhere actually dealing with the computer.

“The big transformative thing that happened as a result of the release of Mathematica — and it happened rather quickly — was that people like theoretical physicists, mathematicians, things like this …  Those kinds of people, were able to go from thinking of a computation to actually doing a computation directly, and were able to, therefore, get much further in lots and lots of different areas.

“And it’s been wonderful over the last third of a century to see all the inventions and discoveries that have been made using the technology that we built.”

In his blog post marking Mathematica’s anniversary, Wolfram wrote, “[E]ven after a third of a century, what we have still seems like an artifact from the future — indeed ever more so with each passing year as it continues to grow and develop.”

But if you traveled through time in the other direction, going backward a third of a century, you’d reach 1955 and “the dawn of electronic computers … the time when mass production of computers began,” Wolfram pointed out.

Skipping back another one-third of a century, he wrote, brings you to 1921, “when ideas from mathematical logic were just beginning to coalesce into what became the concept of computation. 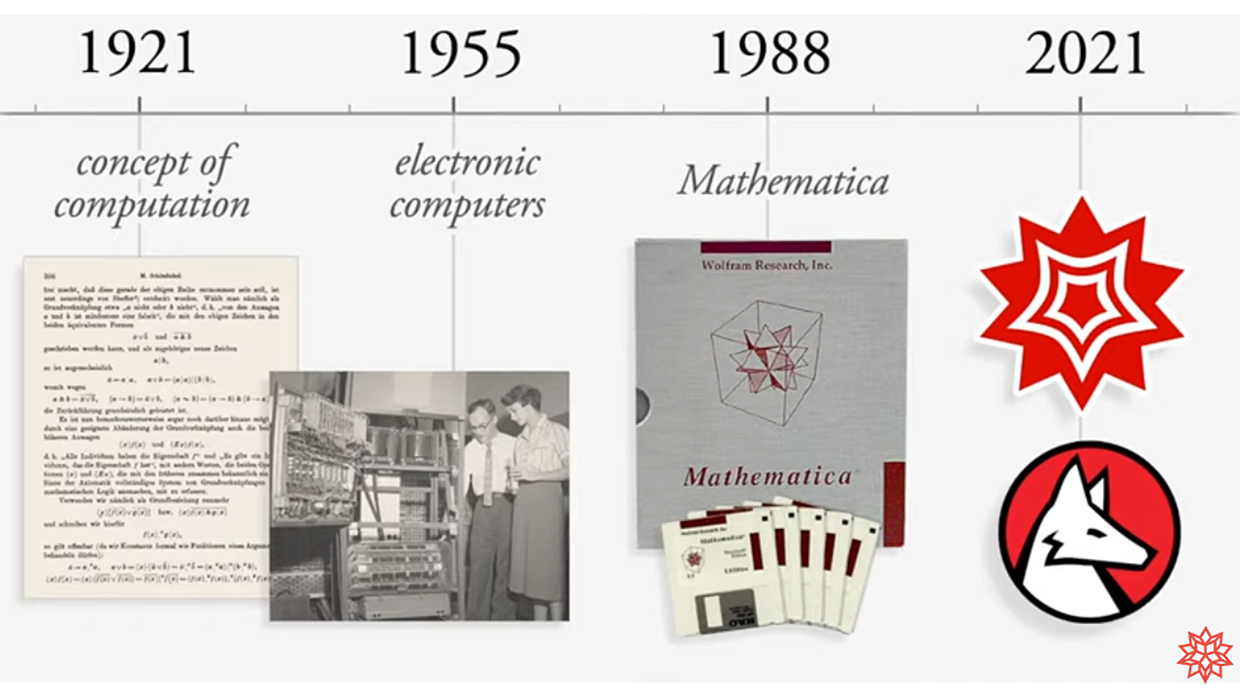 Wolfram showed YouTube viewers a glimpse at how computational computing has evolved.

“And in some ways what we have built owes more to 1921 than to 1955. Yes, Mathematica and everything that has come from it runs on electronic computers; they are what have allowed us to actualize what we have done. But from the beginning, the core of Mathematica — and what is now the Wolfram Language — was based on foundational ideas that transcend the specifics of their implementation.”

In his video, Wolfram offered a whirlwind tour of the history of science itself, from the invention of mathematical notation through Galileo, Sir Isaac Newton, “the mathematicization of science” — and finally, the ultimate development of the very concept of computation.

Since 1955, the trend has been to instruct the computer on its own terms, argued Wolfram in his blog post. In a large sense, he said in his video, the way we instruct computers to run our programs hasn’t changed much since the postwar era. “They are things like get data from memory, add two numbers together, store data back in memory, jump to somewhere else in the program if something happens.”

He continued, “The early idea, based on the way that computers were back in 1955, was, ‘Well we have to provide a wrapper for humans to these operations that the computer is doing …  It’s very much a way of thinking about computation that’s based on the computer’s-eye view of computation.”

It’s a trend that persisted in the decades that followed, he said. Back in 1979, he noted, “If you were going to write a really serious program, it would be written in assembly language … essentially, in the machine code of the machine directly dealing with questions about, Where does that data go. Which register does it go in? Which underlying machine operation are you executing?

“So in a sense, the origin of what I was interested in doing was to build this kind of framework for doing computations that would be as true to the nature of computation as possible, and as convenient for humans to actually use.”

A Human-Centric Approach to Computation

Mathematica is unique in adopting a human-centric approach, Wolfram argued. “[O]ur objective is to create not just a language to specifically program computers, but a language to represent everything — including real things in the world — in computational terms.”

He added, “What we’ve done is to go from the other side — what do we care about in the world? How do we humans think about things? Let’s try and represent that in the language.”

To this day, the language remains proprietary and closed-source, a fact for which Wolfram offers no apology in his blog post. “I consider it one of our great achievements that we’ve been able to build an organization and a business that has been able to continue to focus on the long-term mission of developing and delivering computational intelligence — now for more than a third of a century.

“I am proud not only of our consistent innovation in technology, but also of the consistency and sustainability of our business practices.

In the end, he argued, “the core of what we have built is something fundamentally intellectual.” Mathematica is a full-scale language “that allows humans to crystallize their thoughts and knowledge in computational form, and then leverage the power of actual computers to work out their consequences.”

An Explosion of Capabilities

At one point in his video, Wolfram actually compared the language’s evolution to life on earth. “There’s sort of a slow process of evolution and understanding and so on. And then — sometime in the mid-2000s — a Cambrian explosion of lots of different kinds of capabilities being created.” 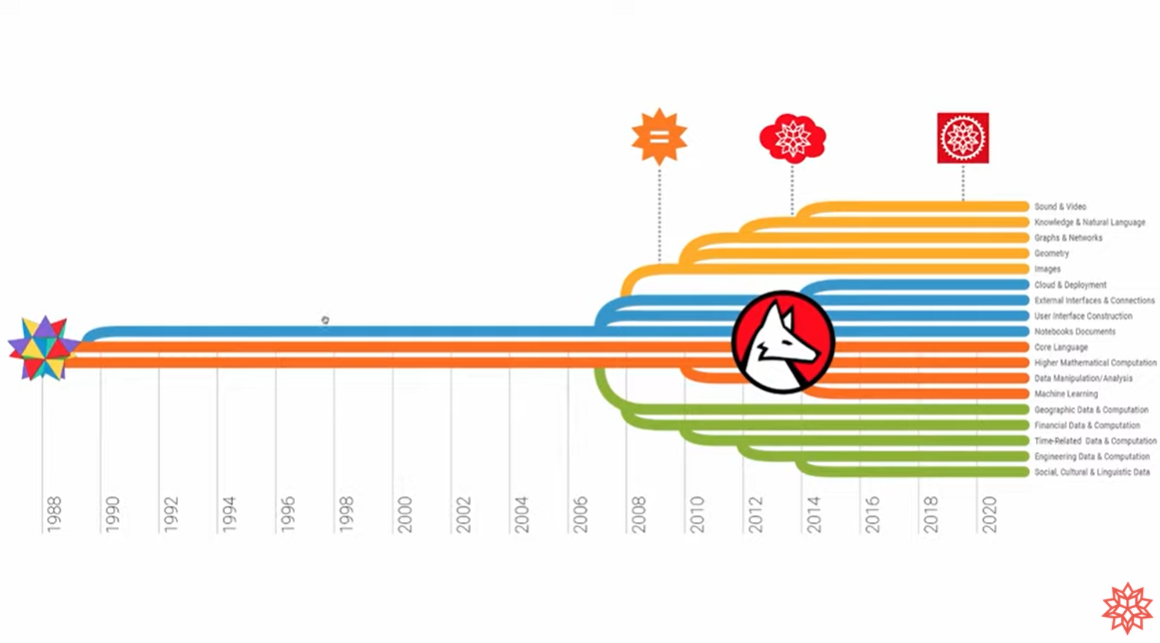 How Mathematica evolved since its introduction in 1988.

“It has been a wonderful and deeply rewarding journey, that has delivered to the world tools that have enabled countless inventions and discoveries, and helped educate generations of students. But in some ways, it has been an increasingly lonely journey — that seems to ascend further and further away from the common expectations of what can be done with computers and computation today.”

Wolfram even says in his video that “I’ve quite often described what we’re doing is building artifacts from the future.”

But it’s early yet, he noted. “And it’s very satisfying that the things that we built a third of a century ago in version one — you know, it’s pure, it’s formal, and it’s still there.” Even better than mere survival: “We managed to maintain compatibility.”

Or, as Wolfram wrote in his blog post, “personally I feel very fortunate to have lived at the right time in history to have been able to be deeply involved with this and for what we have built to have made such a contribution to it.”

In the video, he joked, “I don’t know what the one-third of a century cake should look like.”