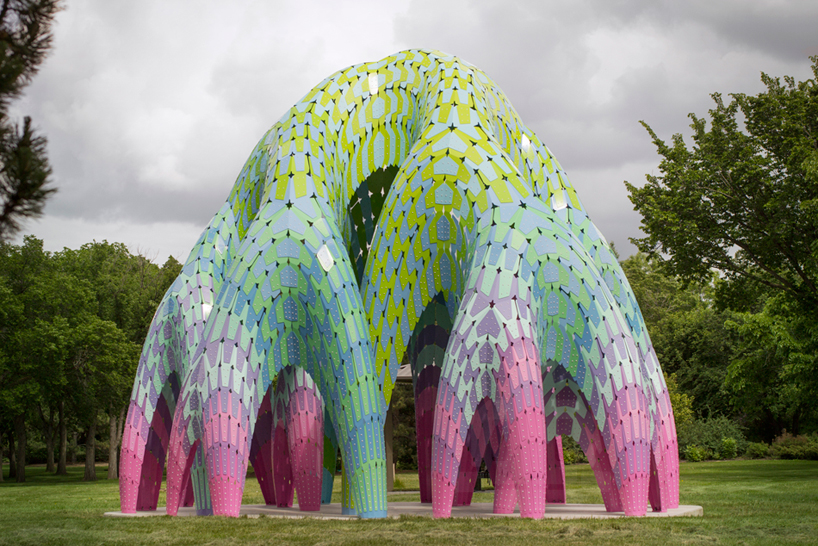 Two decades ago, digitally generated architecture was dismissively called “blobitecture,” referring to the organic, amoeba-like forms that were almost seemingly created at random by software. Yet today, computational design is nevertheless maturing, thanks to ongoing innovations in technology, manufacturing and material science that is converging into a renaissance of digitally-aided design.

Parametric design (also called generative or computational design) is changing the way architecture is made and interacts with its environment. It is not a new concept, but the current use of parametric design software, algorithms and digital fabrication are now used to generate new forms with a speed and accuracy that would not have been previously possible, or too tedious to undertake. It has been said that generative design is not about designing a building, but designing the underlying systems and relationships that will generate the building.

When one parameter is changed in the software, the whole system of pre-set, associative rules automatically updates in response, so that whole designs can be quickly tweaked for any number of factors prior to construction to achieve a desired form or to increase performance in acoustics, energy efficiency and so on. Complex relationships between various sets of data can be manipulated, resulting in free-flowing forms that seem to almost mimic what is found in nature.

One example is the work of French-born Mark Fornes of Brooklyn-based studio TheVeryMany. The small design studio focuses on the computational design and digital fabrication of geometrically complex, self-supporting structures that consist of thousands of flat pieces that are joined together to create organically curving surfaces. Using software like Rhino3D and programming in Python to create custom computational protocols, the studio plays with “structural form-finding and descriptive geometry” in a process that will eventually define “structure, skin and ornamentation into a single unified system.” (Interestingly, most of the studio’s work can be written as text files.) 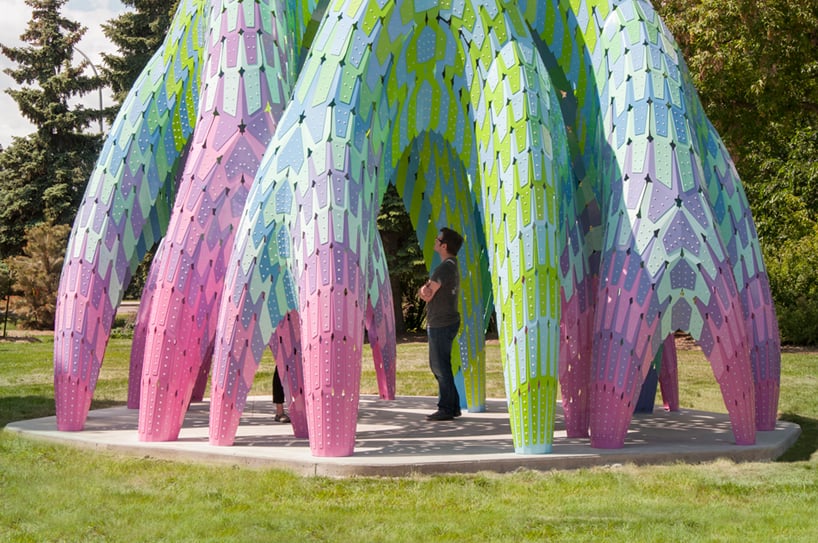 In an interview, Fornes explains how technology has changed architecture: “I think what has changed is the speed of things. You could CNC mill stuff ten years ago, but it would take time because the machines had less performance. Now you can go and cut, like, 100,00 parts — which we do sometimes for some of our projects — in the blink of an eye. A few years ago, an installation that would take six weeks to cut now takes three or four days. So that changes the way that you see the project.”

But it’s not just about the one program that will help architects create these eye-catching structures, he says:

The other thing that’s changed is that around 2000 there was this spirit of trying to get the [expensive] software that would do everything. … In the last five or ten years, people have realized that it’s not about the tool but rather about all sorts of applications that talk to each other. I see that now with the younger people in our field — they don’t specialize anymore in one thing, they just hop from one platform to the other, and they figure out a way to very quickly get things done.

The studio’s work has appeared as experimental installations in galleries, pop-up stores and as park pavilions. One recent piece, Vaulted Willow, was commissioned by the Edmonton Arts Council for a local park. The pavilion is composed of 721 individual aluminum “shingles” that have been assembled into a distinctive form, featuring large, supporting legs that branch off and narrow closer toward the ground, enhancing rigidity and effectively distributing downward structural forces. 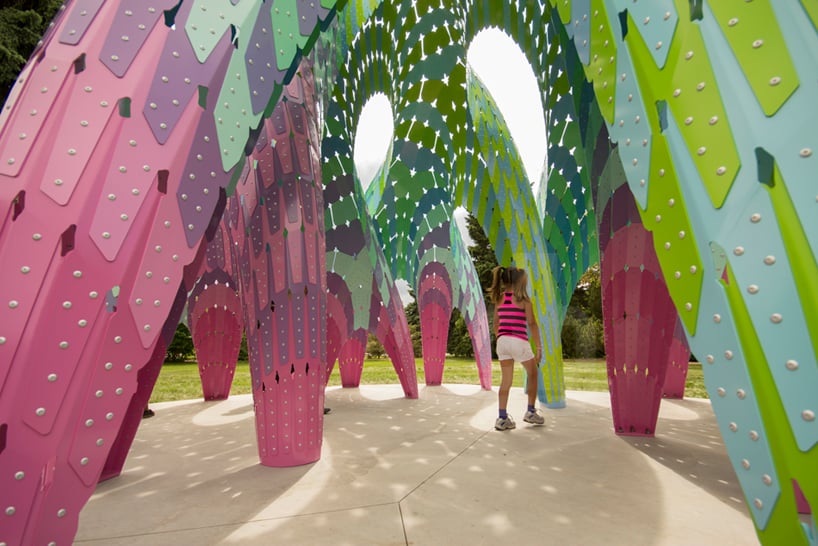 Vaulted Willow is the latest iteration of the studio’s continuing research into self-supporting, lightweight monocoque shells, consisting of hundreds to thousands of assembled pieces. The pavilion’s overall, curved catenary form is “inflated” along various planes to create double curvatures, which intrinsically creates stiffness without the need for a supporting structure, while optimizing anticipated forces and snow and wind loads. The structure is held together with a dynamic network of various types of connectors, determined by parameters like length, angle constraints and strength.

Various characteristics are computationally determined, like the density of the gaps between the shingles. The frequency and size of these openings increase with height to allow light to filter through, and also because less material is needed for structural strength near the top. Details like rivet density, the size of the overlapping tabs and color patterning are all driven by computational protocols, creating a resulting work that looks like a trippy, quasi-natural outgrowth of the park itself. 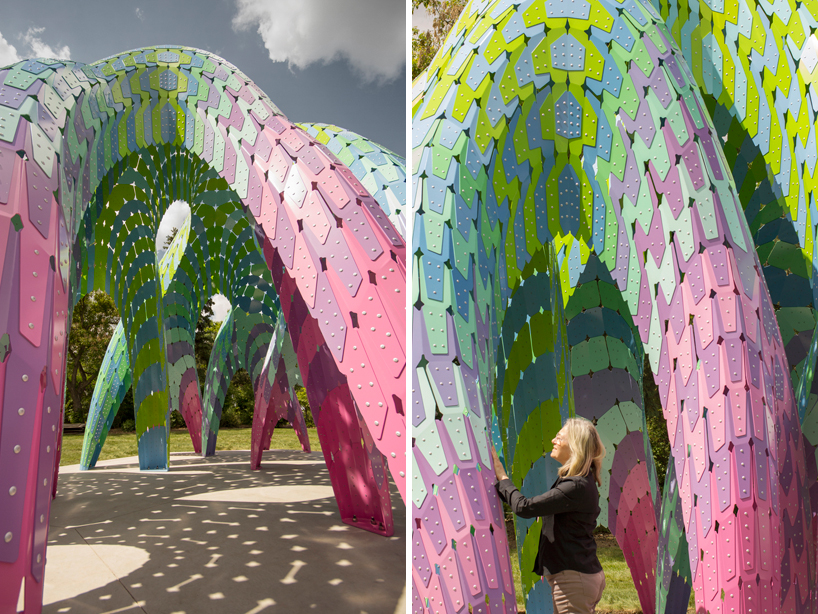 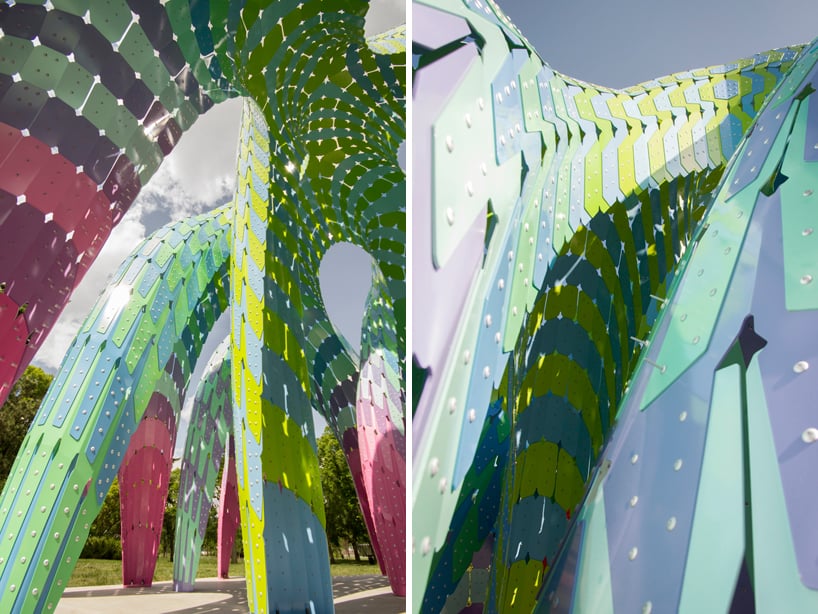 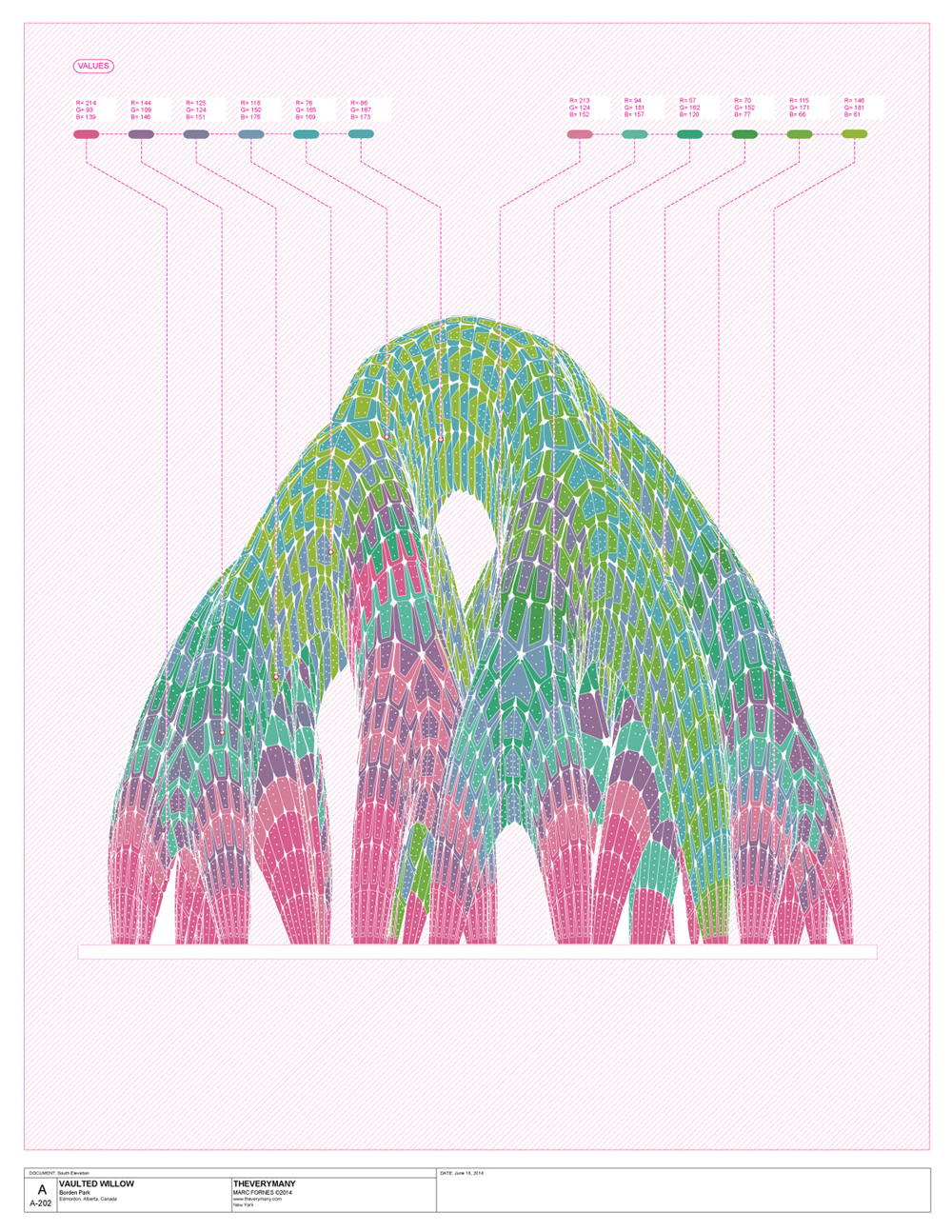 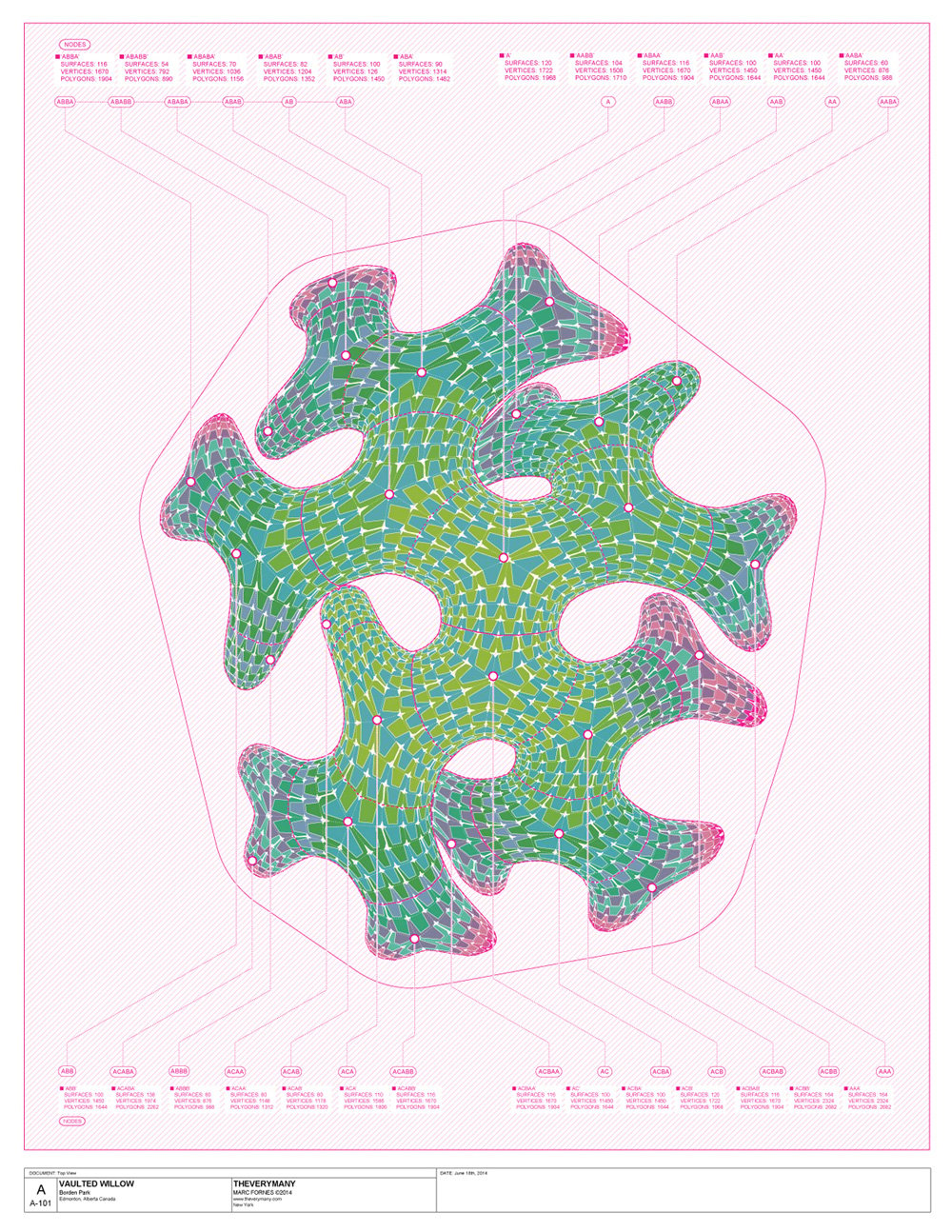 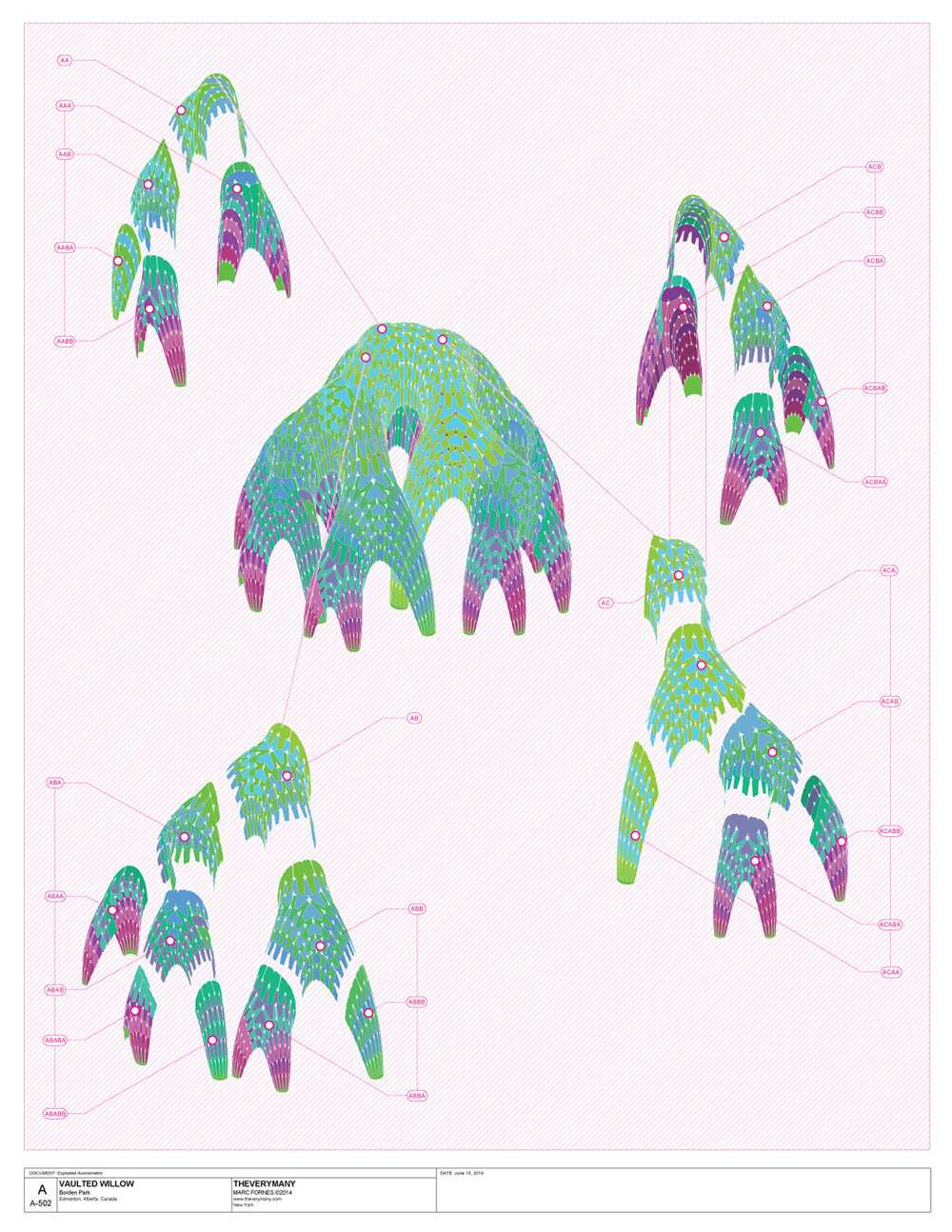 Parametric and computational design has come a long way in the last few years. Buildings look less like amorphous blobs and more defined, sometimes even bio-mimicking nature’s beautiful forms and patterns. The evolving integration of parametric techniques into design circles is challenging what role the designer will play in the future: will they become more like technologists and programmers, and less like the idealists of yesterday, the Le Corbusiers and Frank Lloyd Wrights? It’s not clear, but for now it seems that such tools provide a quicker way to test, assess and refine design, not replace designers themselves.

Though our traditional buildings are not going away anytime soon, structures like Vaulted Willow are pushing the envelope of what might be considered shelter someday. Granted, many of these free-flowing, organic forms are still difficult to translate into enclosed spaces — spaces with partitions, insulation and all the systems required for a functional, livable building — but experimental projects like these are exploring the vast possibilities what our built environment might look like if it were driven by data and digitally fabricated. See more over at TheVeryMany.