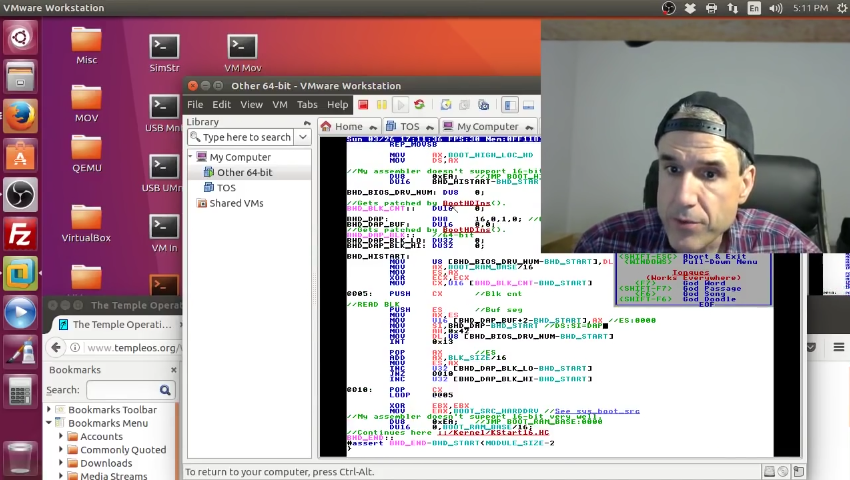 He led a life that was strange yet inspiring. A young Terry Davis graduated from Arizona State University 26 years ago with a 3.63 GPA. His SAT score was 1440. He started his IT career at Ticketmaster in 1990 working on the company’s VAX operating system, but began struggling with mental health issues, which led him to a psychiatric hospital — and briefly, to jail — until he was eventually diagnosed with schizophrenia. Soon he was living with his parents, collecting Social Security disability payments.

And over the next 12 years, he built his own operating system, writing over 100,000 lines of code, because he believed that God told him to.

“It has a flight simulator, a compiler, kernel, editor,” Davis bragged in one of his many online videos about LoseThos (which he later renamed TempleOS). “It even has grep. It has a sprite editor, a 3D mesh creator…” As part of the project, Davis even created an original programming language — a variation of C which he had named “HolyC.”

As he unveiled his creation online, the reactions were mostly sympathetic. TechRepublic called his OS “a testament to the dedication and passion of one man displaying his technological prowess. It doesn’t need to be anything more.”

They noted that it was meant to be educational, the way Terry remembered his old Commodore 64. 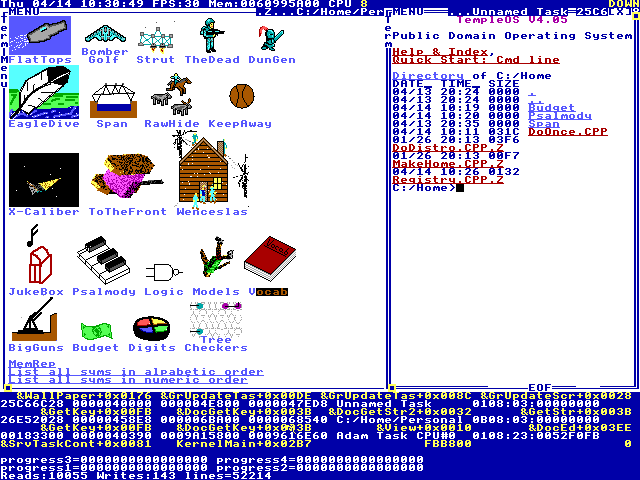 Davis could be difficult, with his schizophrenia seeming to punctuate many of his online comments with racist and homophobic epithets. OSNews called him “a controversial figure… for his incomprehensible rants and abrasive style towards OSNews readers and staff. We eventually had to ban him, but our then-editor Kroc Kamen worked with him in 2010 to publish an article about his operating system despite his ban.”

“I’m glad that operating systems like LoseThos still exist,” Kamen wrote, “in that it shows that computing can still be a hobby; why is everybody so serious these days? If I want to code an OS that uses interpretive dance as the input method, I should be allowed to do so, companies like Apple be damned.”

It was an example of how programming websites tried to find the necessary patience and understanding to accommodate Davis — maybe because they recognized him as one of their own. Motherboard called Terry “God’s lonely programmer,” describing how the project appeared to the man who created it. “Terry Davis has offered the world a temple to a God who speaks only to him, and is still waiting for everyone else to listen.”

The beautifully-written article drew over 800 upvotes on Hacker News, and many sympathetic comments. “With this illness, he got a bad deal in life. I hope he stays safe and gets all the care he needs.”

Another describes being inspired to learn more about Davis’ story, and then about schizophrenia, posting “I’ve also come to understand a friend’s schizophrenic relative a bit better. I’ve read accounts of schizophrenia and art intersecting, but did not understand what it is, what it’s like, *, until I witnessed schizophrenia intersecting with IT, at which point the gates of empathy, admiration and fascination were flung wide open.”

And then eight months ago, his online audience noticed that Davis was homeless.

One friend later told a local newspaper that Davis had refused medication because he believed it stifled his creativity. A clinical psychologist had even said Davis turned to homelessness rather than be hospitalized.

“During his homelessness, his fans helped him, bringing him supplies,” the paper reports. “But he refused offers of housing, including from fans in Atlanta and Houston.” The local police say they never had any complaints about Davis — until the night he was hit by a train when walking along the tracks.

They described him as a transient.

Neita Cecil reported the news for The Dalles Chronicle, an Oregon newspaper for the small town of The Dalles. She told us Thursday that this turned out to be a story unlike any other. “It was pretty amazing, actually, to get a phone call, and then another phone call, and then more phone calls, and then to hear from some guy clear in Australia. It’s like, ‘Oh my god. This guy has an international following!'” People had also called her editor. They even called the local police department.

They’d hoped that the reports of Davis’ death were just online rumors. Were they sure it was really him? Neita says there’s no question. “I’ve seen the police report — his name and age and hometown and stuff like that. I almost thought I should post a screenshot of it so people would believe it, but we didn’t go that far.”

There’s something touching about what happened next. “I returned phone calls and I talked to some people. And some of them were in the computer world, so they were very aware of his accomplishments there. Another guy wasn’t necessarily a computer person, but he just liked the guy. He just liked the man. That was interesting — that there were people who were following him for different reasons.”

“I talked to three or four people and they each kind of added a little information to what he’d accomplished,” she said.

“What was interesting was the guy from Australia said he talked shop with him — he talked computers with him — and he was always lucid when he talked about computers. He just never showed the schizophrenic side, the unstable — the side that he was criticized for in which he’d used racial slurs.

“He just wasn’t like that when he was talking about computers.”

She began writing a follow-up story, though that presented some unique challenges. “Some of the people who talked to me didn’t want their name used because it wouldn’t have been good for them professionally because it would’ve been controversial… They cared enough to pick up the phone and find me and call me, they wanted to really know that he was gone, but they also didn’t want their name used.”

She Googled “Terry Davis,” discovering the online videos he’d recorded over his life. “He had this pretty significant following.”

And the last two-minute video — recorded hours before his death — shows a haggard Davis describing how he’s “living homeless” and using the computer at the local library. Birds chirp in the background.

“I watched his last video that he made, and I knew it was from our local library.”

As word of Davis’ passing made its way around the net, Davis’ fans emerged to remember the man. New York-based computer science enthusiast Dave Eddy created his own tribute, playing the music from Davis’ videos slowly on a piano.

“TempleOS is an engineering marvel and Terry A. Davis was an inspiration to a lot of people out there including myself,” he writes in the video’s description.

Other fans shared their own homemade tributes on Reddit’s official forum for TempleOS — not just to the brilliant programmer, but to the man himself. “I can’t believe he’s gone,” posted one fan on Reddit, linking to a tribute video that consists of 22 seconds of Davis dancing.

Another modified a screenshot from Davis’ very last video.

Someone even posted a set of 10 photos that they said they’d taken at the site of Davis’ death:

Though there had been hours and hours of videos of Davis online, The Dalles Chronicle reports that “Because he believed God’s 11th commandment was to not litter, he deleted a lot of his videos ‘littering’ the internet just before his death.” But his fans want Davis to be remembered, and are collecting up copies of his videos and preserving them online.

Despite his struggles with schizophrenia, some videos capture moments that were simple and happy. There’s Davis singing along with a heavy metal song, just banging away on some drums, and singing with a guitarist on a street corner.

I’ll always remember him wearing that backwards baseball cap, showing off his creation with excited eyes. “I am the smartest programmer that ever lived,” he says several times. As the video gravitates to profanity-laced chest-thumping, he demonstrates the 3D shapes he’s just coded up to spin over his command line. He calls Unix “the last war” and was critical of the Massachusetts Institute if Technology.

Davis’ work may continue, since there’s a fork of TempleOS “for heretics.” It’s called Shrine.

And over on Hacker News, other fans shared their own condolences.

“The phrase, ‘tortured artist’ is thrown around a lot, but he really was a tortured artist… it’s a sad end to a life that went awry for reasons beyond his or anyone’s control.”

“He needed a lot of help, but a great hacker has passed, and we should remember him for his work.”

“I can’t begin to imagine how difficult it’s been living such a challenging life for all these years.”

“I always thought of Terry as somewhat of an anti-hero of the hacker community. Most of us know what it feels like to go down a rabbit hole building something technically impressive, yet ultimately useless, because the voices in our heads told us to.”

Over 600 people upvoted the story, offering one more testimonial to the memories Davis left behind. In the end, nearly 200 comments were added to the thread.

The fond feelings seemed widespread, reaching throughout a community that stopped one more time to pay its respects. As just one more among many, developer Jason Slack posted that Davis had been a real inspiration. “Watching him over the years made me start writing my own tools for a lot of things instead of just accepting what functionality an app provides and how they choose to provide it.”

And in another comment, Slack posted his final respects — just one more fan in a wide community of appreciation.

From the TempleOS website: In the wake of Terry A. Davis’ passing his family has requested supporters of his donate to “organizations working to ease the pain and suffering caused by mental illness” such as: