The Value of Big Tech in Open Source Sustainability

Open source technology is sustainable in its current form, according to 64% of the 5,800 people recently surveyed by the cloud provider DigitalOcean.
Dec 6th, 2019 10:47am by Lawrence E Hecht 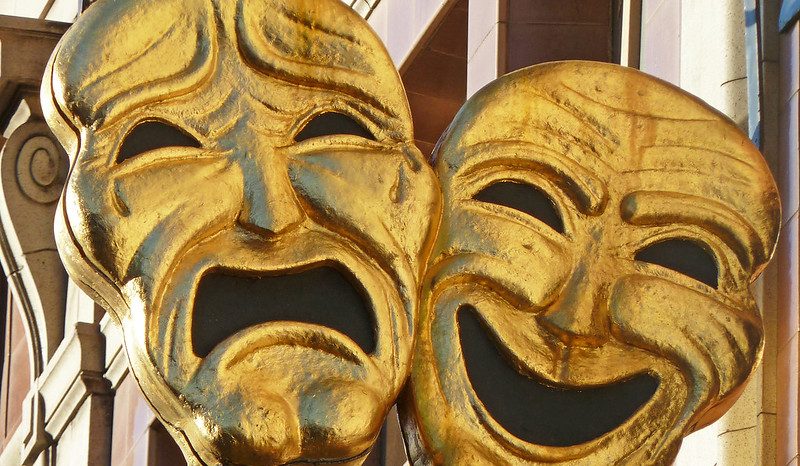 Open source technology is sustainable in its current form, according to 64% of the 5,800 people recently surveyed by the cloud provider DigitalOcean. More than three-quarters of these optimists (77%) cite a dedicated community as a reason for the expected sustainability, and 52% mentioned large organizations’ sponsorship of open source projects.

Source: “DigitalOcean Currents Q4 2019.” 15 times as many respondents think open source is sustainable as compared to unsustainable. 32% are unsure, which is reasonable considering concerns about funding and threats from large tech companies.

Given their funding and support of many large-scale, widely-depended-upon projects, it is not surprising that 34% of the study is not concerned with major tech players’ level of involvement in open source. Still, 41% of the study is concerned about big tech’s role in open source. Among this group, 60% worry about the corporations’ intentions and 56% mentioned restrictive licenses’ role in creating an unfair competitive advantage. Only 25% said that these companies’ lack of contributions is a reason for their concern. This confirms results from The New Stack’s own 2019 survey, which found that large tech companies are significantly more likely than average to contribute to upstream projects.

Our research also found that Google, IBM (including Red Hat) and Microsoft were at the top of a list of 11 companies in terms of open source community citizenship. DigitalOcean’s survey covered this topic by asking about how “friendly” specific companies are with open source. Alphabet (Google’s parent) and Microsoft topped the list with about three quarters viewing them as at least somewhat friendly. Of the six companies asked about, only Apple was viewed negatively, with half saying it is at least somewhat unfriendly to open source.

DigitalOcean’s sample skewed towards younger participants, with 43% being under 25 (Gen Z) and only 5% over 45 (Gen X/Boomers). The younger generation is much more positive about open source. With their extended experience, they were twice as likely to say they felt excluded by the open source community because of negative interactions.

We plan to follow up on this generational divide in a future article that uses data from a recent MongoDB survey. 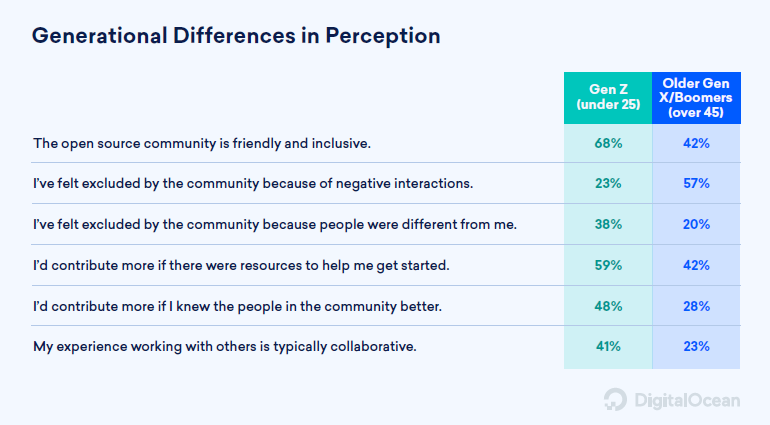 Feature image is a photo by Tim Green.

Lawrence has generated actionable insights and reports about enterprise IT B2B markets and technology policy issues for almost 25 years. He regularly works with clients to develop and analyze studies about open source ecosystems. In addition to his consulting work,...
Read more from Lawrence E Hecht
SHARE THIS STORY
RELATED STORIES
What It's Like to Run a Mastodon Server in the Musk Twitter Era Bryan Cantrill: What’s Next for Infrastructure, Open Source and Rust Hybrid Data Collection from the IoT Edge with MQTT and Kafka Top 5 Internet Technologies of 2022 What TypeScript Brings to Node.js
TNS owner Insight Partners is an investor in: The New Stack.
SHARE THIS STORY
RELATED STORIES
What TypeScript Brings to Node.js Netlify Acquires Gatsby, Its Struggling Jamstack Competitor Bryan Cantrill: What’s Next for Infrastructure, Open Source and Rust Top 5 Internet Technologies of 2022 Log4j: Why Organizations Are Failing to Remediate This Risk
THE NEW STACK UPDATE A newsletter digest of the week’s most important stories & analyses.
The New stack does not sell your information or share it with unaffiliated third parties. By continuing, you agree to our Terms of Use and Privacy Policy.