The Wedding and the 3D Printer 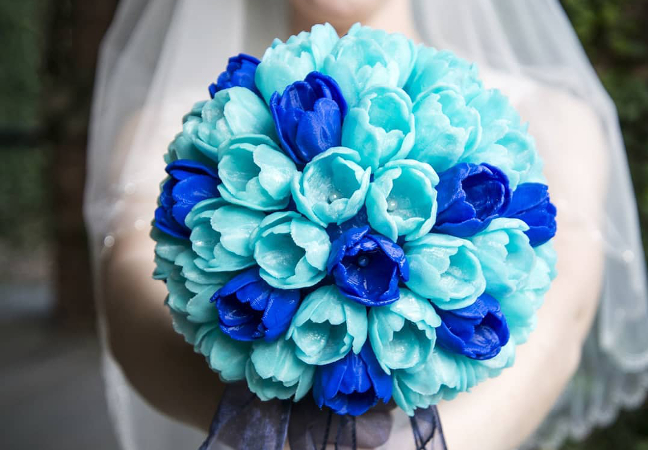 New open source technologies continue to change our world in unexpected ways. So maybe it was inevitable that they would eventually find its way into one of our society’s most personal of rituals — and one of its most expensive: the wedding ceremony.

Erin Winick, an associate editor at MIT Technology Review, recently described how she generated everything for her wedding in November using a 3D printer, with help from some Open Source designs she’d found online. “By focusing on 3D printing, I was able to custom-design our wedding and create a physical representation of what we plan to do next: make a life together,” Winick wrote in a widely-read article.

Everything means everything — from her headband down to the flower girl’s necklace, as well as the table numbers, the cake topper, and the decorations on the cake. She even used a 3D printer to create the bride’s bouquet — plus all of the bouquets for the bridesmaids.

And then she walked down the aisle to the theme from “Jurassic Park.”

The trickiest part of the project seems to have been those bouquets — since Winick actually printed each of the 200 plastic blooms individually. “In all I spent more than 100 hours, over the course of many months, pumping out flowers whenever I could after work and on weekends.

“I then arranged them on Styrofoam balls using traditional floral-arranging pins and glue….”

She acknowledges it might’ve been faster with a newer (albeit more expensive) printer. But she does address one frequently-asked question about how she deployed her home-brewed bouquet during the big wedding ceremony.

“Don’t worry, I didn’t throw mine—I didn’t want to risk knocking out one of my friends with a big spiky plastic ball”

Winick has a background in mechanical engineering, and also founded her own 3D printed “science jewelry” company, Sci Chic. So after owning a 3D printer for three years, “the chance to combine my passion for manufacturing with a huge life milestone was too tempting to pass up.”

But in a new interview with The New Stack, Winick finally reveals what happened next. After the wedding ceremony, she’d faced the same question that faces every bride: what do you do with all those (3D-printed) decorations?

“Some of the decorations I kept, and others we actually donated for local organizations to use for their events,” Winick says. But not everything. “My bouquet is sitting in a vase on my dining room table now and I plan on that being in my house for a while.

“I’d love to keep and possibly pass it on to a family member or close friend one day if they were interested in using it.”

It’s a theme she returned to in her article, since Winick found many helpful models online on the design-sharing site Thingiverse. “[W]hile I may have 3D-printed everything, many parts of the maker community came together to support my wedding. And in turn, I’m contributing back by uploading my table numbers and remixed leaf model to Thingiverse as well.

“If you have a wedding coming up, I would be honored if you would use the table numbers as part of your centerpiece.”

She designed the flower girl’s necklace and table numbers herself from scratch, using the solid-modeling software SolidWorks. “Whenever there was a choice between making and buying something, I went for the 3D-printing option…” Winick writes in her article. “Like many other DIY and hobbyist projects, it allowed for a deep connection to the things I created.

“3D-printed items have a personal touch you don’t get from purchasing something at the store.”

Happily (and Thriftily) Ever After

The end result was a flood of gushy compliments from her family and other wedding guests. “Engaged friends were even saying they might steal a few ideas for their own ceremony,” Winick writes. But the internet also delivered its own appreciative compliments. “The wedding industry is a bloated one that sucks up billions of dollars from people each year,” opined an article at 3Dprint.com, “so it’s refreshing to see more people turning away from that kind of rampant consumerism and using their own creativity and skill instead.

“That’s what the maker movement as a whole is about, after all — not only saving money but creating and doing for oneself.”

Winick writes that she saved hundreds of dollars — bridal bouquets are expensive, and she also there’s also the expense of buying bouquets for each individual bridesmaid. But instead, she equipped her whole wedding party with her gorgeous homebrewed flower bouquets for just $75.

“3D printing still may not be cheap enough to put up a huge fight against traditional mass production, but when it comes to wedding costs, it actually starts to look like a good deal.”

Did I mention my wedding bouquets glow in the dark?! The big day is tomorrow and my hotel room is illuminated by my 3D printed creations sitting on the desk.
So excited for tomorrow!#anthonywinickwedding pic.twitter.com/OC3oJuzqDD

But there was more to it — a chance to imbue the ceremony with a very special meaning. “For me and my fiancé, 3D printing also brought a chance to customize our celebration to our personalities,” Winick’s article concludes. “We are both makers at heart.”

“By focusing on 3D printing, I was able to custom-design our wedding and create a physical representation of what we plan to do next: make a life together.”

She’s not the only one using new technologies to create do-it-yourself wedding decorations. “I designed our wedding rings and had them 3D printed by Shapeways.” remembers Peter Combs, a U.C. Berkeley graduate student in biophysics. In a comment on Hacker News, he writes that “It’s pretty cool having a one-of-a-kind piece, plus knowing that if anything ever does happen to the ring, it can be easily replaced.”

And Jeff McJunkin, an information security professional living in Southern Oregon, replied that he’d also been inspired to do the same thing after a reading a blog post about a $100 engagement ring that had been 3D printed in silver to match the sketches of a classical-looking ring. “I got to iterate over four or five designs and ended with a very nice design, and choose the stones separately.”

Soon another poster said they were doing something similar with all the decorations for their upcoming wedding next month. “I designed and 3D printed table number stands and the cake topper while she added the finishing touches with spray paint. Highly economical and a lot of fun!”

And soon another commenter came forward with a nearly identical story. “I designed and printed our cake topper. We painted each other’s topper which was super fun. ”

There have even been news stories about brides wearing incredibly intricate 3D-printed wedding dresses.

But of course, all of this elaborate ceremony is meant to kick off a long life of living happily ever after. So did it work?

“Married life has been awesome,” Winick told us Wednesday. “My husband and I have actually been together for about 8 years now so things haven’t changed too much, but it was great to make things official.”

And more to the point, “I appreciated his support on all my random projects. He was totally game for all of it.”