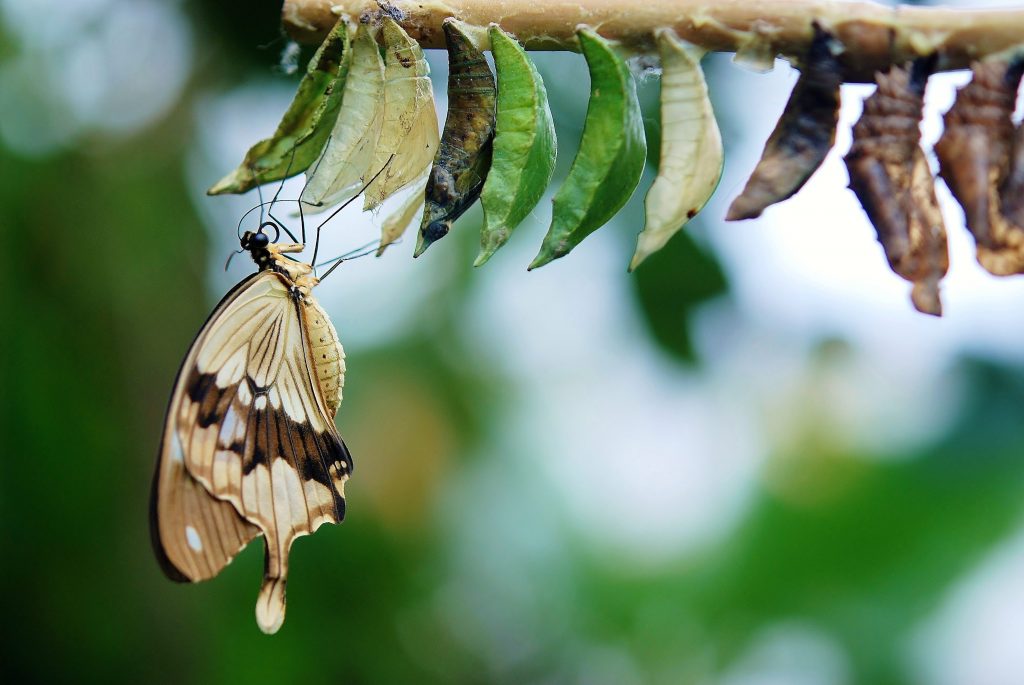 The Apache Kafka distributed streaming platform is not changing but its typical use cases are. Commercial Apache distributor Confluent issued its third annual Apache Kafka Report, which surveyed over 600 users of the technology, a 71 percent increase compared to last year’s sample. What appears to be a broadening user community has a better idea of Kafka’s business value. A more nuanced definition of the technology and increased adoption of microservices results in a different outlook on Kafka’s association with the term “stream processing.”

Another explanation for the changes is that Kafka is no longer viewed just as a backend for stream processing in competition with Apache Spark and Storm, and connecting with Hadoop. Thus, Spark may be used for real-time analysis while Kafka is the source for real-time data. 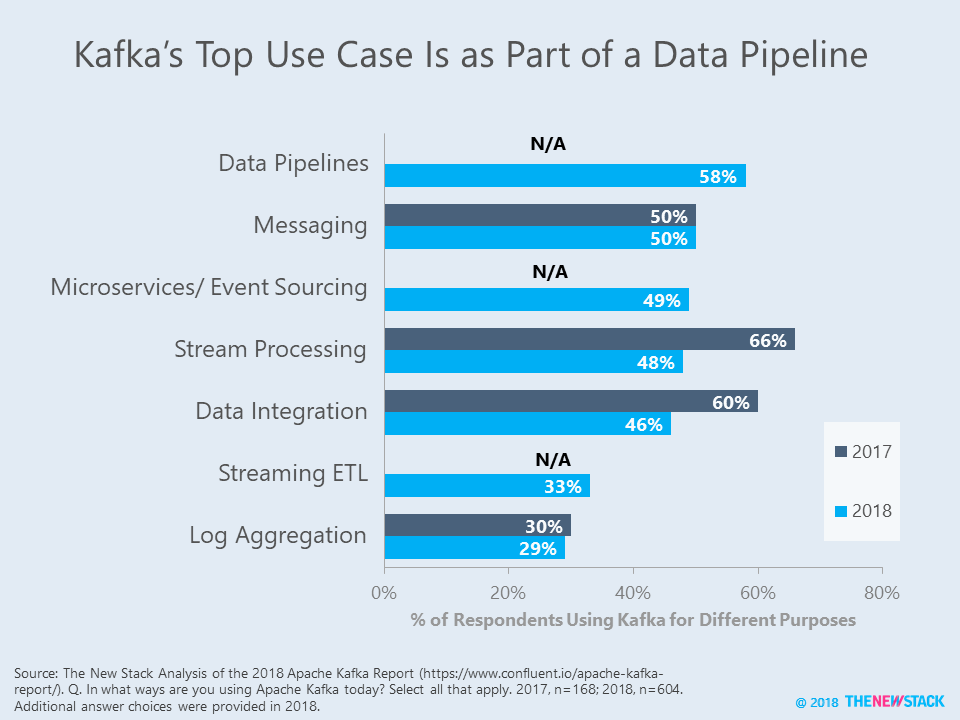 The data gets more interesting when people are asked not about the broad categories, but instead about the specific Kafka streaming capabilities being used. Those using Kafka stream processing capabilities with asynchronous applications jumped from 25 percent in 2017 (when the term was “Kafka Streams API”) to 44 percent in 2018. Its use for backend analytics also rose from 22 percent to 30 percent. As adoption of the microservices architecture increases, so does the focus on Kafka’s event-driven aspects as opposed to the real-time capabilities. 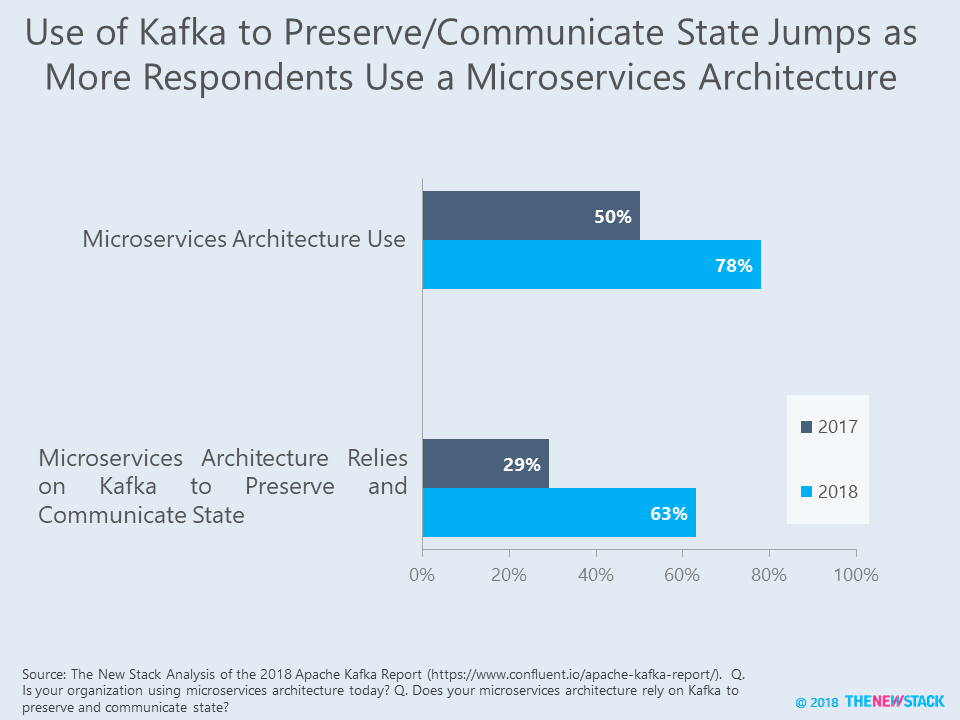 By communicating through Kafka with events, microservices create a shared log which preserves the state they share. As Kafka becomes a backbone for microservices, Confluent believes organizations gain more organizational agility.

If so, then Kafka is addressing what its users believe is the technology’s top business value. When asked broadly about the business value of streaming platforms like Kafka, 55 percent said increased agility, with another 48 percent saying it unlocks new use cases. The top responses in 2017  “more accurate and/or faster decisions” and “reduced operating costs” dropped 11 and 9 points respectively as the “agility” and “new use cases” options were added to the question in 2018. The updated choices show that businesses care about the ability to make quick, agile changes in the infrastructure as opposed to making fast, real-time decisions based on analytics.

Finally, although Kafka allows for new use cases, that does not mean it is only supplementing existing technologies. In fact, 62 percent said that is replacing a technology, with messaging and pub/sub being the areas most likely to be affected. 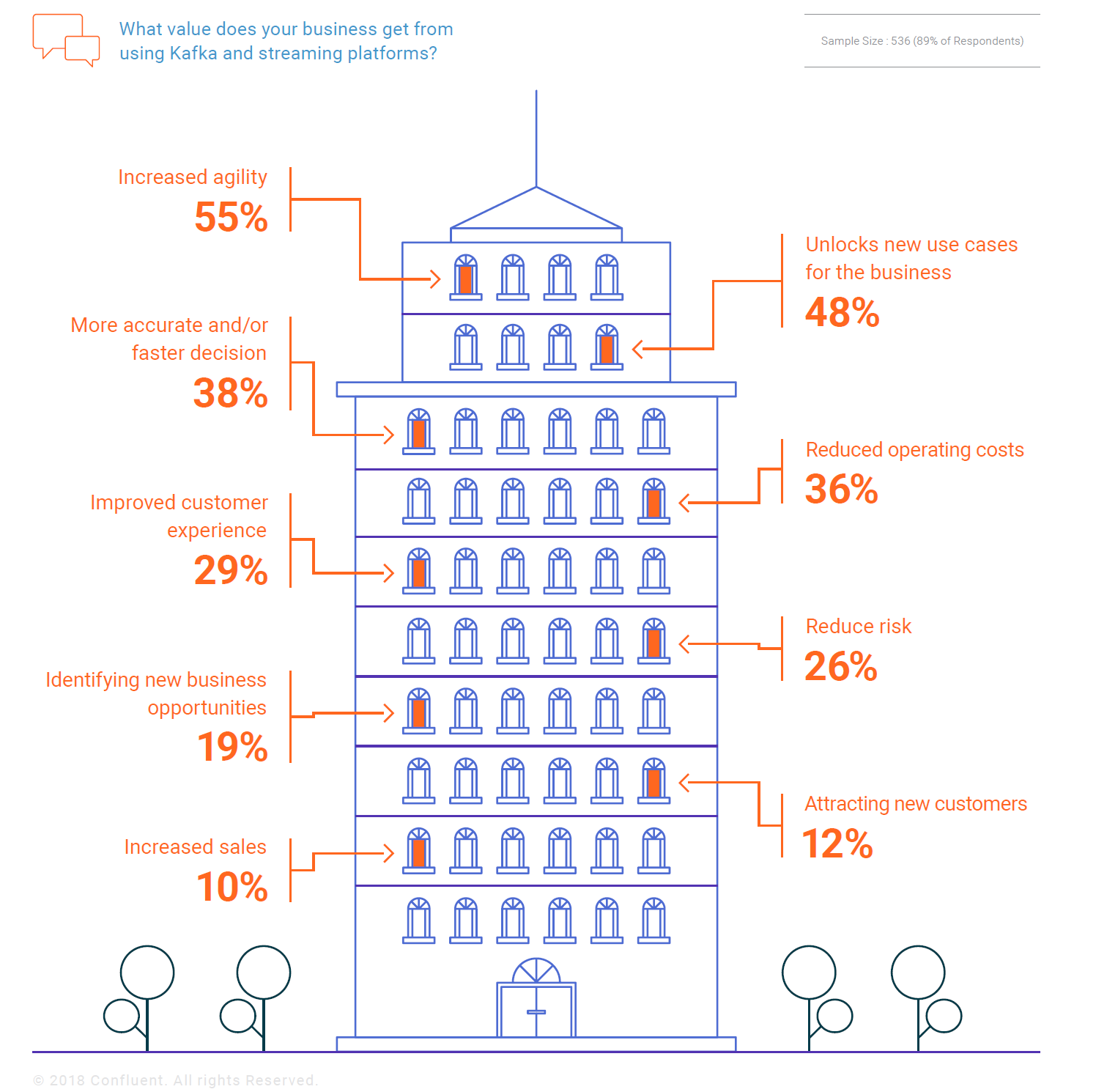 Lawrence has generated actionable insights and reports about enterprise IT B2B markets and technology policy issues for almost 25 years. He regularly works with clients to develop and analyze studies about open source ecosystems. In addition to his consulting work,...
Read more from Lawrence E Hecht
SHARE THIS STORY
RELATED STORIES
MongoDB Partners with Databricks for App-Driven Analytics Dig Security: One Tool for Multicloud Data Security Data, Analytics and AI: What Will Happen in 2023 Let SQL Do All the Work: User Defined Functions Enterprise Blockchain Is Doomed
SHARE THIS STORY
RELATED STORIES
Enterprise Blockchain Is Doomed Why You Need a Centralized Approach to Monitoring  MongoDB Partners with Databricks for App-Driven Analytics Bit.io Offers Serverless Postgres to Make Data Sharing Easy Data, Analytics and AI: What Will Happen in 2023
THE NEW STACK UPDATE A newsletter digest of the week’s most important stories & analyses.
The New stack does not sell your information or share it with unaffiliated third parties. By continuing, you agree to our Terms of Use and Privacy Policy.