This Week in Numbers: Discrimination in the Tech Industry 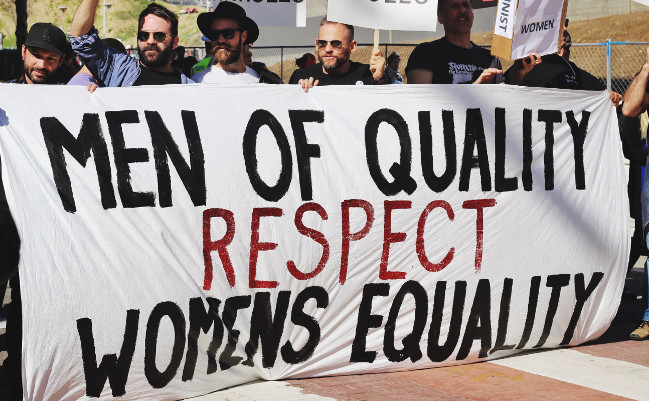 Regardless of their sex, one in three people would recommend an employer even if they had seen discrimination while working there. That is one takeaway from the Dice Diversity and Inclusion Report 2018. Based on a survey of US and UK tech professionals using Dice or eFinancialCareers, the report looked at discrimination based on gender, age and politics.

The study found that 85 percent of women believe gender discrimination exists in the tech industry while only 62 percent of men feel likewise. In other words, twice as many men don’t see sexism. The results mirror many other studies that show men are much less likely to see sexism as a problem. This dynamic also plays out in regards to racism, with black and brown people much more likely to be concerned. Which leads us to ask, why wasn’t discrimination based on ethnicity discussed? The omission is striking!

Likely because of personal experiences with gender discrimination, only 59 percent of women are willing to recommend their employer as a place to work, while 79 percent of men would do so. Digging deeper into the subject, many men would change their minds if they thought the employer was allowing discrimination to continue. In fact, almost the same percentage of women and men (33 percent and 44 percent respectively) would recommend their employer even if they have seen discrimination in that workplace. Stated another way, about a third of the tech community is willing to accept discrimination as a fact of life. 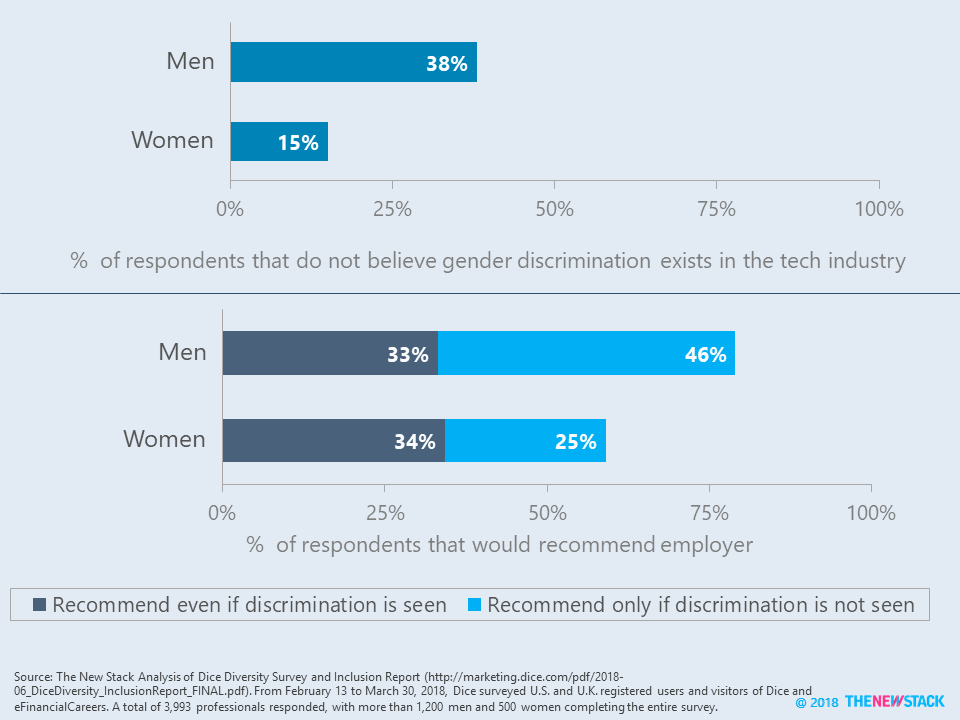 According to the Dice survey, more tech professionals experienced or witnessed discrimination due to age compared to gender, political affiliation, or sexual orientation. Although we know that many younger professionals participated in the survey, the exact proportion is unknown. If the sample over-represented older professionals, then ageism may not be as a significant problem as gender discrimination. Just don’t tell that to people over 40 — well over half of this group are concerned that their age is a barrier to them getting a new job. In fact, among those 55 or older, 88 percent are worried that their age can hurt their continuing career. 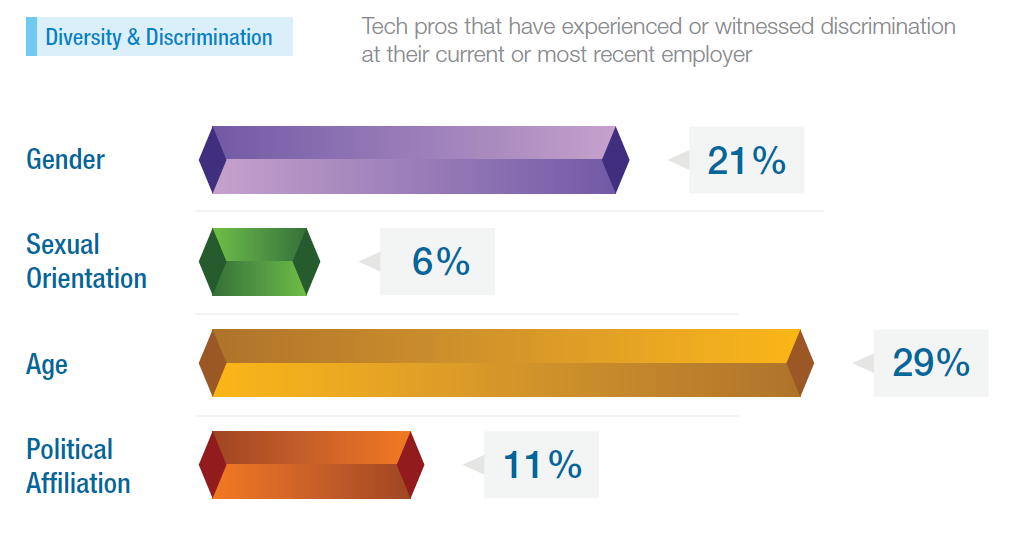 Almost nine out of ten 50+ year old respondents are worried about their age will be a barrier to getting a new job.

Lawrence has generated actionable insights and reports about enterprise IT B2B markets and technology policy issues for almost 25 years. He regularly works with clients to develop and analyze studies about open source ecosystems. In addition to his consulting work,...
Read more from Lawrence E Hecht
SHARE THIS STORY
RELATED STORIES
Kubernetes 101: Install Kubernetes on Rocky Linux Case Study: How SeatGeek Adopted HashiCorp’s Nomad How Paylocity Scaled Up Community in the Cloud with MongoDB 6 Security Risks to Consider with WebAssembly Chronosphere Nudges Observability Standards Toward Maturity
SHARE THIS STORY
RELATED STORIES
Creating ‘Offline-First’ Applications for Wi-Fi Dead Zones Devs Are Excited by ActivityPub, Open Protocol for Mastodon Kubernetes 101: Install Kubernetes on Rocky Linux OpenTelemetry Properly Explained and Demoed SAP Builds a Low-Code Platform on K8s and Cloud Functions
THE NEW STACK UPDATE A newsletter digest of the week’s most important stories & analyses.
The New stack does not sell your information or share it with unaffiliated third parties. By continuing, you agree to our Terms of Use and Privacy Policy.