This Week in Numbers: Serverless Now Rivals VMs Delivered as a Service 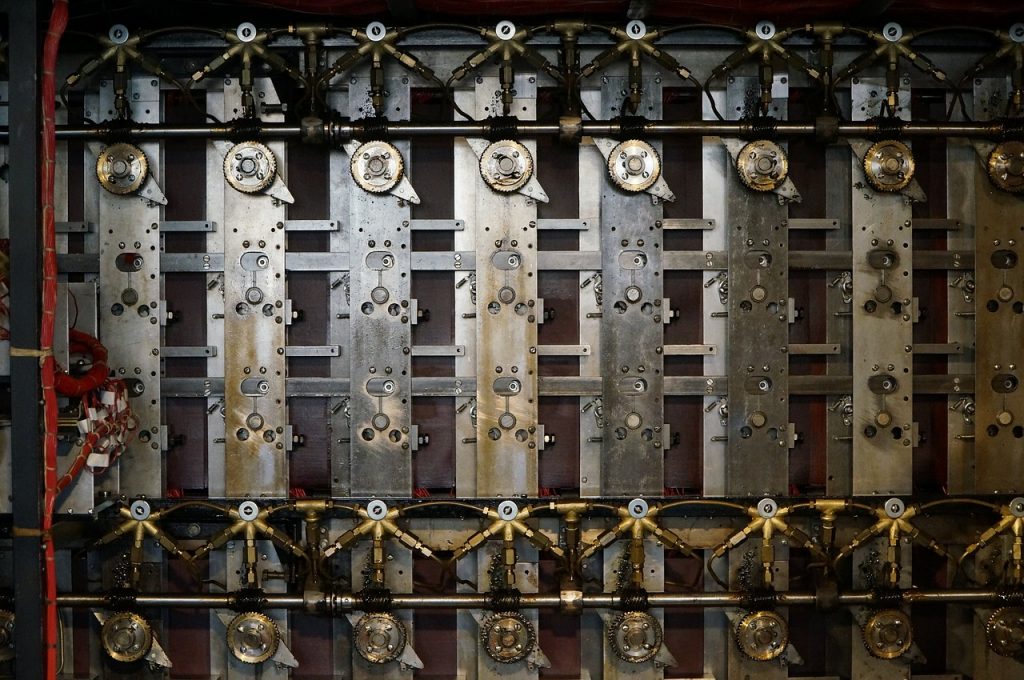 Remember when cloud computing meant paying to spin up a virtual machine (VM) instance? Use of VM infrastructure as a service (IaaS) has consistently dropped among backend developers according to surveys conducted by SlashData. In the first quarter of 2018, only 20 percent of these developers utilized an on-demand VM service, down from 46 percent in the third quarter of 2016. Meanwhile, 19 percent of backend developers have adopted serverless computing platforms. While that may seem high, it is actually a modest figure compared to serverless survey data we have previously reported. 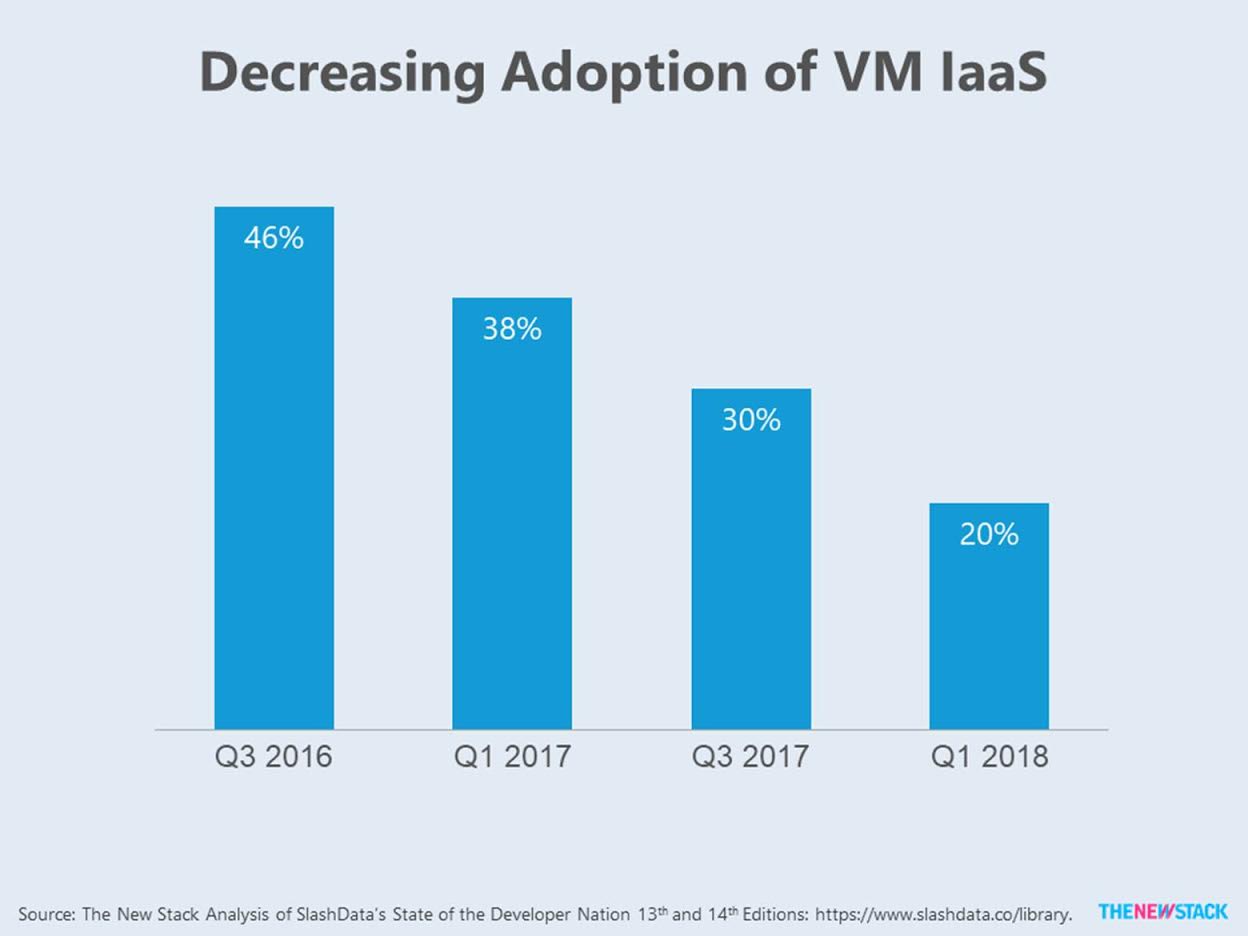 Readers should be aware that I was a co-author of the Slashdata Q3 2017 report. Only publicly available data is referenced in this analysis.

Although VM IaaS as service is declining in use that does not necessarily mean the number of VM deployed has decreased. Instead, it can be said that the balance of developer attention is tipping towards containers-as-a-service (CaaS), on-demand containers and serverless as recently described in Twistlock’s continuum of cloud-native topologies post for The New Stack. In the graphic below, on-demand containers refers to services like AWS Fargate or Azure Container Services.

Further investigation is needed to determine whether bare metal, VMs or containers are the infrastructure directly underneath the compute abstraction that developers focus on.

FaaS as Part of the Cloud Provider Portfolio

As cloud providers move beyond VMs, they have become more of a platform unto themselves, offering a portfolio that also includes on-demand containers and functions as a service (FaaS). Backend developers that use serverless platforms were asked about specific serverless computing platforms they use or were aware of. Unsurprisingly, the leaders’ positioning mirrored that of the larger cloud market. Forty-four percent use AWS Lambda, with 25 percent using Azure Functions and 24 percent using Google Cloud Functions. 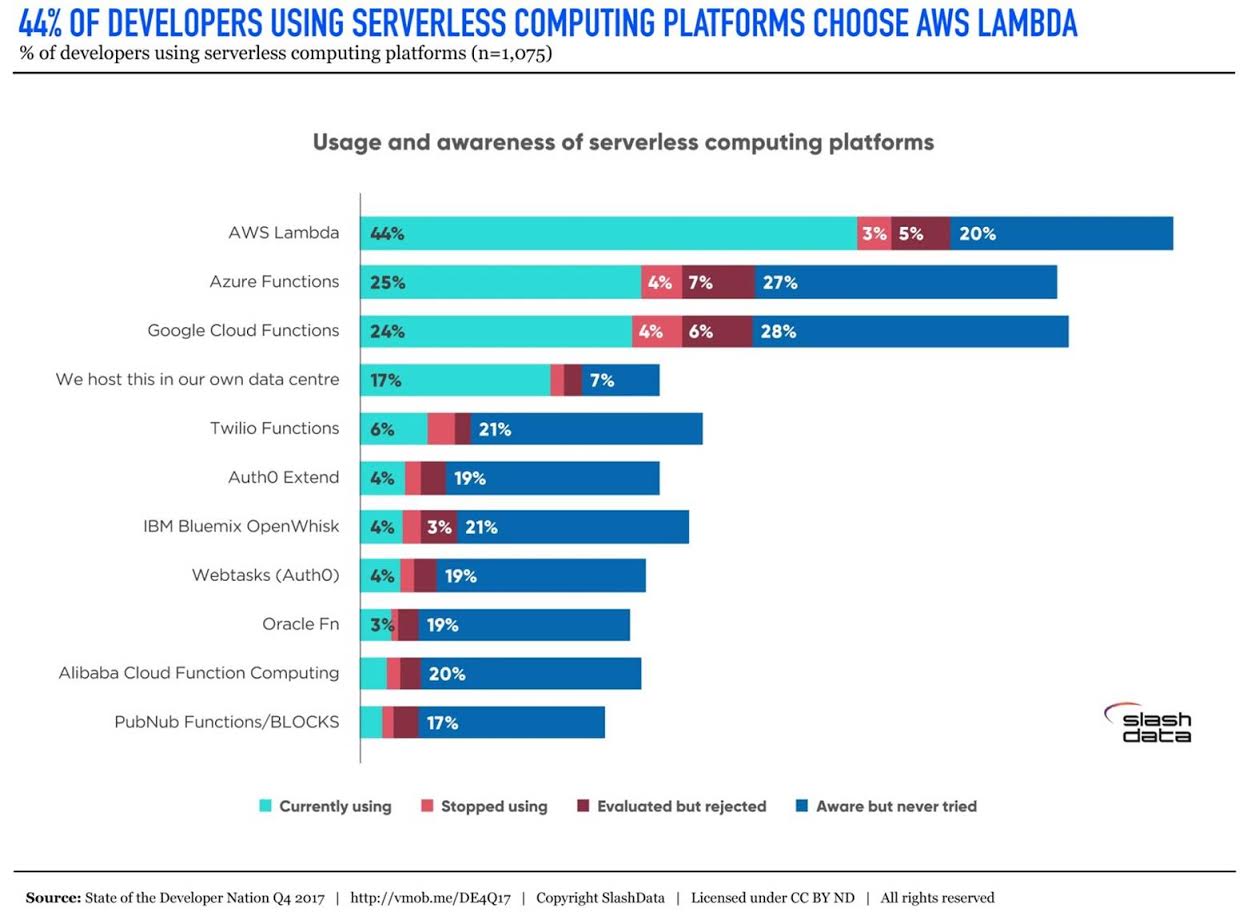 Lawrence has generated actionable insights and reports about enterprise IT B2B markets and technology policy issues for almost 25 years. He regularly works with clients to develop and analyze studies about open source ecosystems. In addition to his consulting work,...
Read more from Lawrence E Hecht
SHARE THIS STORY
RELATED STORIES
Bit.io Offers Serverless Postgres to Make Data Sharing Easy How MongoDB Brought Its Serverless Database Service to the Cloud Jamstack Panel: How the Edge Will Change Development Is Kubernetes Adoption Slowing? Early Days for Quantum Developers, But Serverless Coming
TNS owner Insight Partners is an investor in: The New Stack.
SHARE THIS STORY
RELATED STORIES
3 Principles for Building Secure Serverless Functions Jamstack Panel: How the Edge Will Change Development 2022 a Golden Year as JavaScript Moves to the Edge Hazelcast Aims to Democratize Real-Time Data with Serverless This Week in Programming: Honeycomb's ARM Advantage
THE NEW STACK UPDATE A newsletter digest of the week’s most important stories & analyses.
The New stack does not sell your information or share it with unaffiliated third parties. By continuing, you agree to our Terms of Use and Privacy Policy.