This Week in Programming: Does C++ Suck? 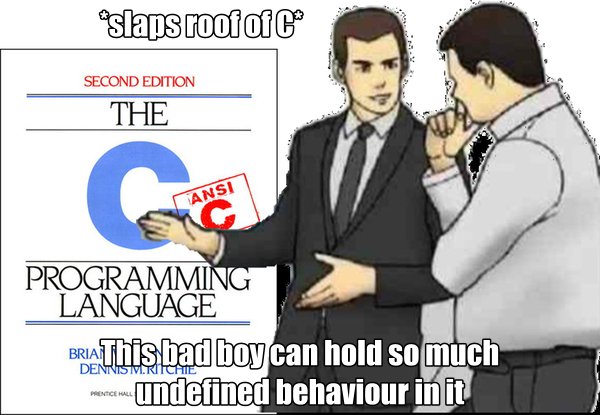 Late last week, Slashdot asked its Twitter followers a simple question — Is C++ a terrible language? — and got an answer from one serial entrepreneur Elon Musk, CEO of commercial space outfit SpaceX as well as CEO of electric car company Tesla. His answer about C++? Yes, it is a terrible language.

Now, your first question may be, is Musk even that much of a programmer? Well, thankfully someone has already asked that one too, and done some full-on Internet sleuthing to boot. Citing Musk’s early Internet projects, a game he created and sold at the age of 12, and more, the most popular answer on Quora seems to offer that Musk is of capable programming ability to offer a valid opinion. And while UML creator Grady Booch offers that the C++ creator, Bjarne Stroustrup, might beg to differ, alas, Stroustrup has yet to join the world of wasting time debating semi-pointless things on Twitter.

I suspect that Bjarne would disagree.

Now, at the core of this whole debate is a yet-to-be-released replacement for C++ profiled in GamesIndustry in development by indie game programmer Jonathan Blow. According to the article, Blow calls C++ a “really terrible, terrible language… where they said: ‘We’re going to be C with a bunch of stuff added’ and that was an okay idea. But they made a lot of really bad decisions in the beginning and then they had to repair a lot of those decisions later on, and it’s kind of a mess.”

And more so than Musk, Blow ought to know — he’s been programming games for a couple of decades now, including Braid and The Witness. Thus, Blow is creating Jai to be “a better language for programming games than C++” that works to “improve the quality of life for the programmer…  simplify the systems; and increase expressive power by allowing programmers to build a large amount of functionality with a small amount of code.”

Chances are, much like the Musk-spectrum, you’re likely to fall somewhere on either side of the love or hate spectrum of C++. After all, even Blow remarks that “C++ is a powerful language in some ways because it’s what we make games in so obviously it’s doing something right. But it makes it a lot harder than it should be.” But if you do tend toward the “C++ sucks” end of things, keep an eye on Jai — it’s set to have a closed beta out by the end of the year, so a replacement may be on the way.

And be thankful you are not slinging code in C itself, (unless you are):

This is the best graphic I have ever managed to make pic.twitter.com/F6afkBpmCu

One thing is for sure, Google does not seem to be a fan of C++ as they have released an experimental programming language called Google Carbon that they wouldn’t mind seeing replace C++.

I always chuckle when UX designers talk about "journeys." People are paying their phone bill, not trying to get to fucking Mordor. Take it down a notch.

What kind of array indexing is this? pic.twitter.com/GY7mSQjRah

programmers: Facebook is so shady, I don't trust them one iota. You should all delete your accounts.

also programmers: Yeah so I think we should use Yarn to install React so we can connect to this GraphQL server.

Mike is a freelance writer, editor, and all-around techie wordsmith. Mike has written for publications such as ReadWriteWeb, Venturebeat, and ProgrammableWeb. His first computer was a "portable" suitcase Compaq and he remembers 1200 baud quite clearly.
Read more from Mike Melanson
SHARE THIS STORY
RELATED STORIES
Internal Developer Platforms Are for DevOps too Is the Answer to Your Data Science Needs Inside Your IT Team?  Watch Out, Attackers Have Their Heads in Your Cloud! Turbocharging Host Workloads with Calico eBPF and XDP Core Wars Shows the Battle WebAssembly Needs to Win
TNS owner Insight Partners is an investor in: The New Stack, Docker.
SHARE THIS STORY
RELATED STORIES
Wasm for the Frontend: A Look at Developer Use Cases WebAssembly vs. JavaScript: Security, Speed, Flexibility Let SQL Do All the Work: User Defined Functions Is the Answer to Your Data Science Needs Inside Your IT Team?  How Platform Engineering Can Improve DevOps Collaboration
THE NEW STACK UPDATE A newsletter digest of the week’s most important stories & analyses.
The New stack does not sell your information or share it with unaffiliated third parties. By continuing, you agree to our Terms of Use and Privacy Policy.