This Week in Programming: From the Mouths of Developers 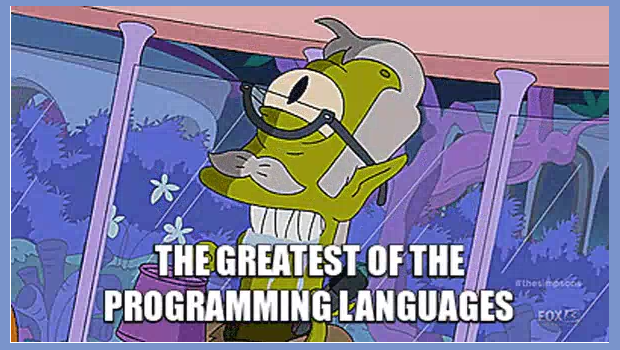 Earlier this week, I went to a “Docker and Kubernetes Night” for a local developer group that holds the occasional hackathon and plays host to a rather active Slack channel. The event, to the surprise of its organizers, drew a nearly capacity crowd for the room they had reserved and, despite a few speakers who were unable to make it, the event was filled with talks and lively discussion.

As someone who works in the writing-about-it and not the using-it business, it was interesting to listen to a room full of active, in-the-field developers talk about their experiences putting containers to use. In some ways, it was eye-opening to hear stories and problems and solutions from developers in the field, instead of pie in the sky tales from evangelists and VPs of marketing and other PR types who might fill emails with catchy buzzwords that fill space more than describe reality.

A Bash-compatible-yet-safety-first shell written in Rust should definitely be called Brash.

The first speaker of the night, for example, works in government and upon starting his position, found out he would have to continue using an old code base, with a less than new language, and would be expected to personally travel and roll out the product to 40+ locations in a process that would easily take a week for each location. That’s right, a single rollout would take nearly a year of travel and time. He quickly got to work containerizing the product and getting the local team to use Docker Compose for development purposes and deploying with OpenShift.

Now, while developing, his team can simply save the code and refresh the browser to test changes, and roll-out will require none of the lengthy process previously required, cutting down deployment time, he says, “by 99.17 percent using this method.” The talk was full of technical details — specific docker commands and YAML code — to back up the fact that, indeed, this developer was using containers to achieve greater efficiency and save vast amounts of unneeded efforts.

The second speaker of the night, meanwhile, had taken things a bit further, using Kubernetes alongside Helm to stand up his application, with the takeaway being that hosting your own Kubernetes was, well, a waste of time. Planning to go the way of Kubernetes? Then a hosted, managed Kubernetes with GKE, EKS, AKS or Digital Ocean – depending on your version, pricing, and GPU needs — were the only ways to go, he said. His exasperation as he spoke was testimony enough to convince me.

it's funny. I started my career working for the year 2000 effect. And I probably will finish it with the 2038 bug.

Finally, the last speaker of the night stood up to offer a different point of view entirely — never mind the unnecessary complexity of Kubernetes, if at all possible, develop from the ground up using serverless. During his talk, he referred to Kubernetes as “bleeding edge,” a point which he later better defined for me:

“It’s a term I’ve heard used on and off over my career for technologies that were in use but very immature. I think Kubernetes has a lot of interest, and people are doing a lot of work on it, but I’m personally very concerned that people will become disillusioned with it (as I have) if it fails to simplify the management of their stacks.”

Was Istio something that would help with this, I asked? “I don’t think so,” he responded. “I think those solutions, which are there to help simplify deployments which span multiple vendors are a real symptom of the problem. The real problem is that people treat Kubernetes as one thing, when it is really a bag of different features from each provider.”

While his push for serverless was full-hearted, he acknowledged that Kubernetes had its place, saying that “new development should start on serverless, because the total cost of ownership is going to be substantially lower,” but that “I think that if you are working on a project that has been around on a while, and it is either on a multitier architecture, or a container architecture, moving to Kubernetes is relatively straightforward and will provide many benefits. Just not the benefits that being serverless would be. But the big difference is in operational costs, which are frequently not well-attributed to development practices.”

So there you have it — a few takes on the pros and cons of containers, Kubernetes, and serverless, not from the mouths of evangelists, advocates, Twitter personalities, or even developer bloggers looking for page views, but just some developers in the field trying to make things work as best they can. Take it for what you will, but I find it rather valuable. Now, onto this week’s news in programming.

If anyone wants a better understanding of Blockchain, I can thoroughly recommend the Fyre Festival documentary on Netflix.