This Week in Programming: GitHub Goes to the Command Line

This Week in Programming offers all the latest development news for the cloud native computing community.
Sep 19th, 2020 6:00am by Mike Melanson 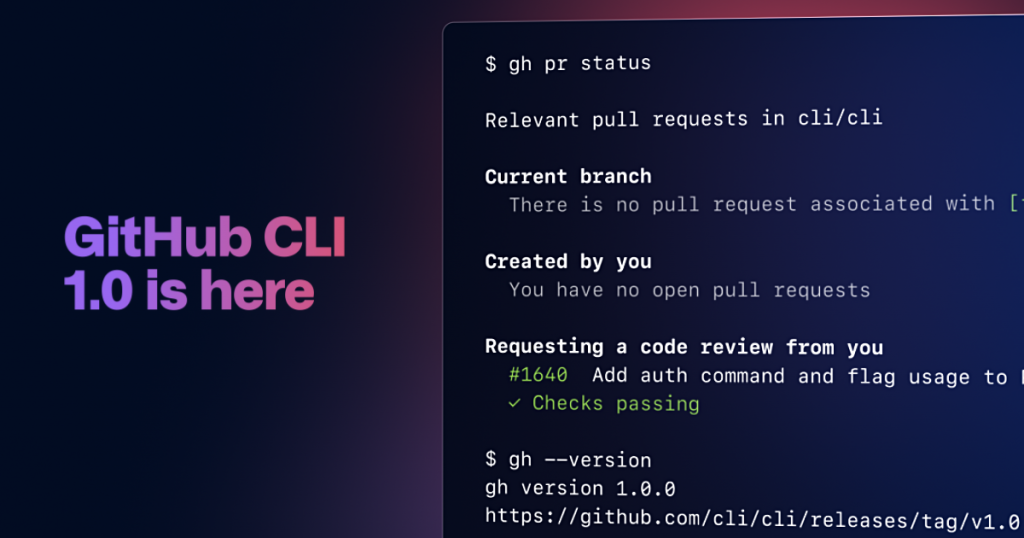 Are y’all ready to party like it’s 1999? Cuz if so, get ready, because we have a brand new command-line interface (CLI) ready for you from GitHub, and maybe, if you’re lucky, you can figure out a way to stylize it with some ANSI colors. So get your mechanical keyboards ready, because we don’t need a mouse where we’re going!

Snark aside, folks are atwitter this week over the availability of GitHub CLI 1.0, following up on the beta from earlier this year, partly because now you don’t need to leave the terminal, and partly because of the automation it enables. The GitHub CLI is available for Windows, macOS, and Linux and allows you to run your entire GitHub workflow straight from the terminal, from issue to release, and a common criticism out there of the new CLI is that it might further confuse young, impressionable coders about the difference between git and GitHub.

The GitHub CLI, of course, goes beyond the base git functionality, and also lets users to call the GitHub API, allowing them to script “nearly any action.” Some of the new features released since the beta include the ability to create and view repositories, configure GitHub CLI to use SSH and your preferred editor, close, reopen, and add labels, assignees, and more to issues and pull requests, and view the diff, review, and merge pull requests.

Now, many have wondered “What about hub?” and, thankfully, there’s a quick little write-up looking at the differences between the two and the reason for making an entirely new CLI. Put simply, the GitHub team didn’t want to be tied down by the architectural decisions of a decade ago and “wanted to be more opinionated and focused on GitHub workflows, and doing this with hub had the risk of alienating many hub users who love the existing tool and expected it to work in the way they were used to.” Hub will remain a separate project, not directly managed by GitHub itself, that “will continue to exist as long as it’s maintained and keeps receiving contributions.”

So, if this whole push toward putting everything in the browser is simply revolting to you, you’re in luck. GitHub CLI is here to help you stay in terminal, just like it’s 1999.

Speaking of 1999 (though this one is more 1989), if you want to see how a developer thinks about beating the speed record for Mario 3, check this out:

The hardest problem in computer science is configuring Envoy using a config file.

this but for the deployed version rather than the same code running on my laptop pic.twitter.com/bGM72kvh9G

Mike is a freelance writer, editor, and all-around techie wordsmith. Mike has written for publications such as ReadWriteWeb, Venturebeat, and ProgrammableWeb. His first computer was a "portable" suitcase Compaq and he remembers 1200 baud quite clearly.
Read more from Mike Melanson
Share this story
RELATED STORIES
Developer Caveats for Database as a Service Why Traditional Logging and Observability Waste Developer Time The Unlikely Journey of GraphQL Developers: Twitter Wants Your Bots (and Other Read/Write Apps) Citrix Has Gone Private. Here’s What It Means for DevOps.
Share this story
RELATED STORIES
Platform Engineering Is DevOps Evolved, New Report Shows Lyft's Tips for Avoiding (Software) Crashes Trivago Cracks the Case of the Vanishing Performance Improvements Service Design Could've Prevented Heroku's Free Tier Closure New Ebook: A Blueprint for Supply Chain Security
THE NEW STACK UPDATE A newsletter digest of the week’s most important stories & analyses.
We don't sell or share your email. By continuing, you agree to our Terms of Use and Privacy Policy.
TNS owner Insight Partners is an investor in: Hightower.