This Week in Programming: Gophers Dig into Generics, Go 2.0 and Gophercon 2018 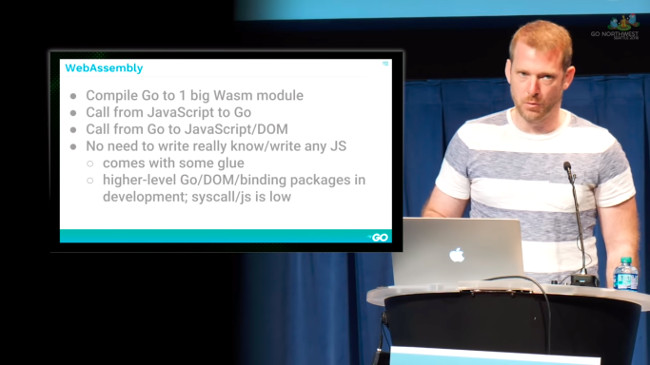 This past week, nearly 2,000 gophers (that’s what you Golang types refer to yourselves as, yes?) descended upon the Mile High City for the fifth annual Gophercon, where hopefully not too many people broke out into fisticuffs over things like generics or the recently adopted vgo semantic versioning. As you might expect, the event offered some big news for the world of Golang, including the latest version of Go to be released, a sneak peak into the next big version of Go, and some talk about how the process works for determining what makes it into that next big release. So, to start off this week, we’ll take a quick look at the latest for you Golang devotees.

First up, the latest version, Go 1.11, was released just prior to the conference, which saw “many changes and improvements to the toolchain, runtime, and libraries, but two features stand out as being especially exciting: modules and WebAssembly support.”

As we discussed last week, this latest version “adds preliminary support for a new concept called “modules,” which is still “considered experimental” and is the renamed version of the aforementioned and somewhat controversial vgo. Go 1.11 also adds an experimental port to WebAssembly, which “allows programmers to compile Go programs to a binary format compatible with four major web browsers.” Surely you’ve read all about version 1.11 by now, though. But if you haven’t, there are always the release notes, as well as a feature round-up in both JAXEnter and InfoWorld that do well to sum things up.

Of course, the big highlight of Gophercon may have been the “sneak peek at preliminary drafts of possible designs for changes to error handling and generics,” which you can watch Go project lead Russ Cox discuss here:

Tech blog PacktHub provides a quick read on Go 2.0, noting that Cox doesn’t seem convinced on the need for generics quite yet. In the above video, Cox says “I’ve been examining generics recently, but I don’t have in my mind a clear picture of the detailed, concrete problems that Go users need generics to solve. As a result, I can’t answer a design question like whether to support generic methods.” Cox also discusses the process for adopting new features, commenting that Go 2.0 is currently in the “identify and explain a problem” phase, which comes necessarily before proposing and discussing solutions. (Does this feel like a “don’t get too irate about anything yet, please?” to anyone else?)

Surely, we could talk about Go 2.0 at length, but there’s more to note before moving on to the rest of the news for the week! Microsoft also joined the Golang news cycle this week with its own announcement of Project Athens and GopherSource, which it says “represent an important milestone in the work that Microsoft has been doing to enable Go developers to build and run better apps and services, with support for Go in tools like Visual Studio Code and Visual Studio Team Services, as well as on our Azure cloud platform.” The open source Project Athens works to create the first proxy server for Go modules, while GopherSource is a community space for “giving feedback and reviews to Go, making official Go proposals and implementing them, fostering a better Go community, and contributing to open source,” according to JAXEnter. And just in case you missed out…

The videos from 2018 are here! Have a favourite talk you'd like to watch again, or maybe you missed a talk that you wanted to see? Here's your chance: https://t.co/kryNeFX4Fp #golang #gopherconuk

If a witch needs to modify one of her existing spells…

Does she use a hex editor?

Mike is a freelance writer, editor, and all-around techie wordsmith. Mike has written for publications such as ReadWriteWeb, Venturebeat, and ProgrammableWeb. His first computer was a "portable" suitcase Compaq and he remembers 1200 baud quite clearly.
Read more from Mike Melanson
SHARE THIS STORY
RELATED STORIES
Rethinking Java @Scheduled Tasks in Kubernetes End-to-End Test Troubleshooting Why Your Code Sucks: Common Excuses for Bad Programming Expedia: 3 Tips for More Effective Unit Testing Core Wars Shows the Battle WebAssembly Needs to Win
SHARE THIS STORY
RELATED STORIES
Let SQL Do All the Work: User Defined Functions Trace-Based Testing for a Distributed World OpenSSF Aimed to Stem Open Source Security Problems in 2022 Pinterest: Turbocharge Android Video with These Simple Steps Yes, Your Enterprise Needs Low Code Now
THE NEW STACK UPDATE A newsletter digest of the week’s most important stories & analyses.
The New stack does not sell your information or share it with unaffiliated third parties. By continuing, you agree to our Terms of Use and Privacy Policy.