This Week in Programming: Have You Heard the One About PHP? 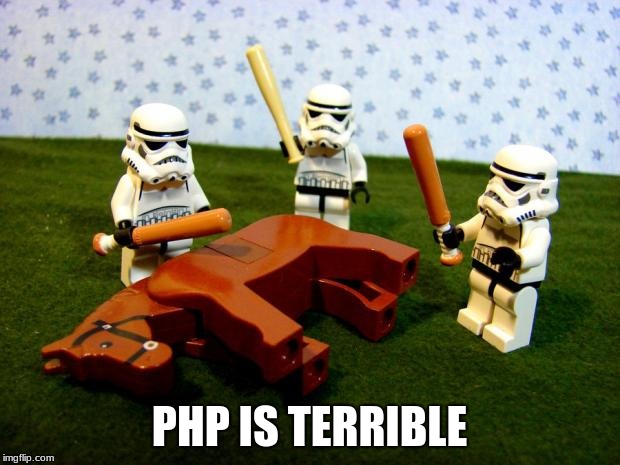 Oh, how we love to hate on PHP. You don’t have to look far to find a comic likening PHP to Trojan horse that “releases hundreds of tiny horses to punish you every day, forever” or a blog post explaining that “You use PHP because you don’t know better.”

“PHP, as a programming language, is the worst language among all the languages I know how to program in,” begins this first ode to the terribleness of PHP. “PHP is, by a wide margin, the least consistent, most error-prone, worst-designed language of any I know.”

Tell us what you really think, why don’t you?

Hello, I'm a JavaScript developer. You may know me from my greatest hits such as [Object object], 'Cannot read property of undefined', and .
.
.
asynchronous execution.

Another blog post on the topic calls the language “a fractal of bad design,” saying that any language worth a damn must be predictable, consistent, concise, reliable, and debuggable, and that PHP violates them all “with wild abandon.”

“Virtually every feature in PHP is broken somehow. The language, the framework, the ecosystem, are all just bad. And I can’t even point out any single damning thing, because the damage is so systemic. Every time I try to compile a list of PHP gripes, I get stuck in this depth-first search discovering more and more appalling trivia. (Hence, fractal.),” the author relates. “PHP is an embarrassment, a blight upon my craft. It’s so broken, but so lauded by every empowered amateur who’s yet to learn anything else, as to be maddening. It has paltry few redeeming qualities and I would prefer to forget it exists at all.”

But don’t worry, these aren’t mere bitter cacophony or empty rant — these posts follow through and deliver all the myriad ways PHP fails, in-depth. But that’s not the fun part. Let’s look at one more.

“There are so many awful things involved in this abomination of a high-level programming language, it outright exceeds full-blown ridicularity,” starts another, which attempts to answer the question of why PHP sucks. “PHP sucks on so many levels that it isn’t even funny anymore mocking it. […] PHP has simply grown too large, you can’t just ignore it. It’s some kind of weird parasitic relationship, or like a tumor that is attached to the World Wide Web.”

And that’s where we’re really at — even five years ago, beating on PHP was already a sad and tired endeavor, and yet we still can’t help ourselves to this day.

This brings us finally to the blog post that pushed me into that endless chasm of PHP-hatred (upon which we’re always teetering at the edge), which comes to us by way of developer Vern Keenan, who offers that he is “as old as the hills,” has “been using and learning about nearly every computer language and database technology since the late 1970’s” and sincerely hopes that this missive “will hopefully be found by other poor slobs like me who are even thinking about using PHP for their cloud project.”

“Dear Go — Thank You For Teaching Me PHP Was A Waste of My Time,” in all honesty, is more a sermon to the charismatic qualities of Golang than it is calculated takedown of PHP, but it still had to offer a swift kick on the way out the door. Keenan explains that he had used PHP long before the “classes and the other Object Oriented Programming capabilities that has given PHP more life lately” came around. Now, however, Go has swiftly taken its place and he’s not looking back — well, just a little.

“Five years from now PHP will be degraded to COBOL status,” Keenan writes. “It will be a language that will employ hordes of mediocre programmers who are managing mediocre, boring code. I’ve seen enough patterns in the IT industry to be confident advising system architects that picking Go over PHP will get you promoted.”

Ahh, so we’ve finally arrived — we rise from the ashes of PHP born anew, with all the hopes and dreams of a new Go-based life ahead of us. Keenan explains why he thinks Go will win:

“Go wins because it strips away all the crap that has been building up in languages ever since we left FORTRAN and COBOL behind in the late 1980’s. Go revives some long-lost concepts in programming, like minimalist code, pointers and a direct approach to data streams. I can see the Go team’s point about how object-oriented programming (OOP) has wrapped things up in layers of complexity and abstraction that we may not need for every situation. […] Go, on the other hand, was designed by computer science gods to go really fast on servers and do tons of stuff in the background that you really need.”

Keenan also points to the rise of serverless as another reason to pay attention to Go, noting that Amazon even brought the Google-backed language to its AWS Lambda serverless platform before Google could offer a similar capability in Google Cloud Platform. The time to switch, he writes, has come.

“Soon, people will start thinking this is a true expression: COBOL == PHP.”

And with that, we end with a little tutorial on using Go in Google Cloud, a feature just released last week.

Me: *going through TSA taking my laptop/iPad/etc out of my bag*

TSA agent: *sees stickers on laptop* "ok put everything in it's own container so it's easy to handle just like in the cloud ok?"

Him: I'll be here all night

Overheard in the office:
"Cannot read property b of undefined"
"To b or not to b"
"Apparently not to b"

Mike is a freelance writer, editor, and all-around techie wordsmith. Mike has written for publications such as ReadWriteWeb, Venturebeat, and ProgrammableWeb. His first computer was a "portable" suitcase Compaq and he remembers 1200 baud quite clearly.
Read more from Mike Melanson
SHARE THIS STORY
RELATED STORIES
What’s the Future of Feature Management? Snack Stack: If Programming Languages Were Desserts ... Introduction to Kubernetes Imperative Commands How to Build Your Own Decentralized Twitter How Bindle Makes It Easy to Store and Distribute Cloud Native Apps
SHARE THIS STORY
RELATED STORIES
Rust and the OS, the Web, Database and Other Languages Citi Shows Continuous Secure Ingestion for Software Packages Modern Attack Methods Jeopardize Cybersecurity Strategies Snack Stack: If Programming Languages Were Desserts ... New Book Identifies 26 Lines of Code that Changed the World
THE NEW STACK UPDATE A newsletter digest of the week’s most important stories & analyses.
The New stack does not sell your information or share it with unaffiliated third parties. By continuing, you agree to our Terms of Use and Privacy Policy.