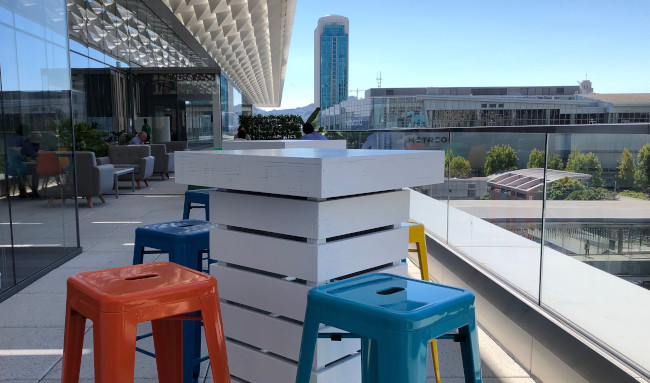 Like many of you, my first tech conference was a long time ago, and I’ve since attended a hundred, if not more. I’ve sat through countless keynotes, music booming from the stage and executives breathlessly espousing the wonders that their new software would bring to the world, patting themselves on the back for the bravery of their live on-stage demonstrations.

Like you all, I’ve perused the expo floor, where companies dangle koozies, t-shirts and other schwag like bait on a line, fishing for email addresses and business opportunities, and sat through too many panels that led nowhere in particular. As any conference veteran like yourself knows, however, it’s not necessarily the keynotes, panels or expo floor where you’ll get the most out of the conference, but rather what’s referred to as the “hallway track” — those chance encounters that happen while you wander between frigid conference rooms, as you grab a complimentary pretzel or slog down another (bane of my existence) conference cup of coffee.

For my money, I’ve likely learned more listening in at the hotel bar across the street from the conference center or chatting at the afterparty event than I ever have during a corporately-approved keynote or panel… though of course, there is the rare gem of insight.

Well, these things are now no more, for the time being, and maybe for a while, and in much the same way that work has haphazardly gone remote, the entire season of tech conferences has had to quickly shift gears and either cancel or go completely virtual. This last month has seen some of the first of these virtual conferences and there’s definitely some good and some less good to this new normal.

In the pros column, there’s obviously the fact that you still don’t have to change out of your pajamas for a keynote, and we’re obviously doing the environment some benefit by not traveling across the globe by the thousands. Oh, and of course, you get to drink your own coffee rather than that aforementioned watered-down drivel.

On the cons side of things, obviously there’s no hallway track, no chance encounters, no running into friends you haven’t seen in years. Instead, there’s another Slack channel to add to your endlessly growing list of Slack channels. Just what you wanted, right? And now, a panel is just an opportunity for someone to talk AT you, as if you don’t have enough of that in your life already — the last thing I really want is to sit and stare at a screen for another hour or 12.

This is precisely where freelance DevOps and Docker consultant, and conference veteran, Bret Fisher targeted his own critique of the newly emerging virtual tech conference this week when he offered up some thoughts on Twitter around the idea of a “perfect virtual conference tech stack.”

The point is it's all about audience engagement. Content in an online event (in a world where there's already too much content) is not as valuable as connection. Sessions should be shorter, and talks should be more a conversation with the audience than just info dissemination

A key point of Fisher’s thread is that “people go to conf’s for the connection as much or more than content” and that what we need is “a video-first experience where the audience is part of the show, and where you find the people you know at the event and you catch up while learning something new.” For Fisher, that will be achieved through a series of existing apps such as social video chat app HouseParty, the gamer-preferred live streaming app Twitch, and the live event app CrowdCast, which allow interaction, rather than more “pre-recorded webinar-style videos that are one-way information.”

To be sure, we are in the nascent days of virtual conferences and it seems likely that from here on out each conference will build on the successes and failings of the last. So far, we’ve seen conferences that run continuously, to hit all the time zones possible, and conferences that take place on a combination of Animal Crossing and Twitch. Coming up soon, Microsoft is holding its annual Microsoft Build developer event and it has already made some changes that would address some of the drawbacks we’ve seen so far. According to a blog post by Microsoft’s Scott Hanselman, the company is going to be holding its event for a continuous 48 hours, repeating all the panels every 8 hours, live — in essence, they’re saying time zones be damned. “No need to stay up until 2 a.m., we’ll do it for you,” he writes.

Hanselman also says that they’ll be offering shorter panels, with deep-dive videos available for those interested, and offering a live Q&A session with each panel. And though he doesn’t say exactly how, he does acknowledge that “sometimes the best track at a conference is the Hallway Track and we want you to spend time with like-minded people in a positive environment so we’ll have ways for you to self-organize and step into your own space to share and learn.” Microsoft will be using at least one piece of Fisher’s suggested virtual tech conference stack, offering “long-form workshops (1-3 hours) LIVE on Twitch.”

I think it’s worth keeping mind that no matter what you think of the companies behind them, the fact there are cloud services is what allows many of us to continue to work and earn a pay check. This would not have been possible if this pandemic happened in 2005.

The reason developer tools need to be fast in one sentence:

If I have to wait more than 5 seconds for something, I am going to switch my tab to something else and will come back in half an hour and that's how I am going to spend my day.

How is it that I can build reliable distributed systems and I still don't understand even the basics of CSS?