This Week in Programming: .NET 6 Preview Picks up Unification Efforts after Pandemic Delays

This Week in Programming gathers all the hottest development news for the cloud native computing community.
Feb 20th, 2021 6:00am by Mike Melanson 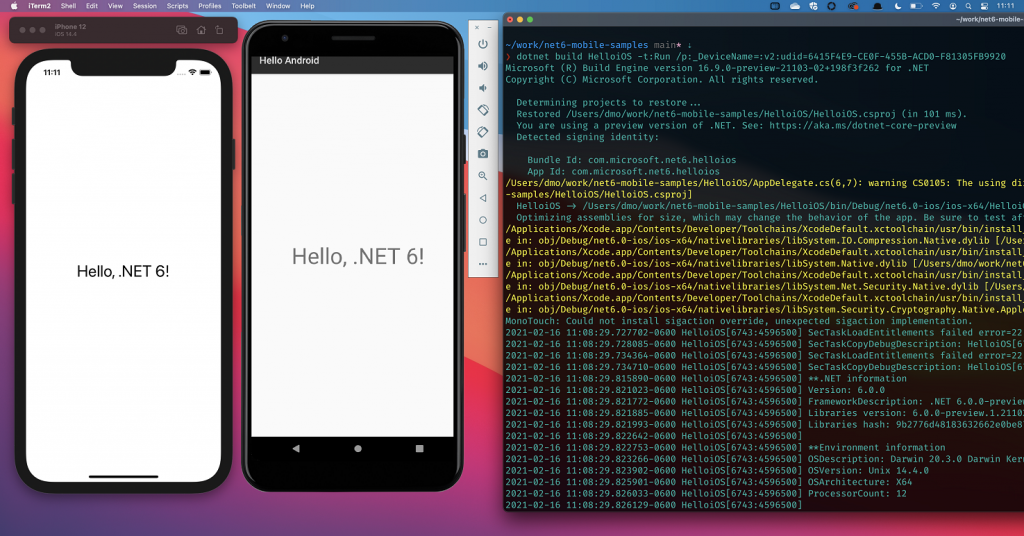 For some of you .NET developers out there, who haven’t been paying particularly close attention, your heads might be spinning a little bit with this week’s news. There’s no need for the double take, though, as it’s all true — Microsoft has put out the first preview for .NET 6, just four months after releasing .NET 5, the current production-read version of the company’s free, cross-platform, open source developer platform.

Not that any of this is actually a surprise, as .NET 6 has been planned for 2021 all along and the preview is already available for download, preceding an expected November 2021 release. In fact, Microsoft has created a public facing roadmap for .NET that shows the various themes, making clear that .NET 6 is here to pick up and run with many of the themes introduced in .NET 5. With .NET 6, Microsoft is taking up the slack after experiencing a bit of a pandemic-related stutter, when the company failed to deliver on some of its unification promises in .NET 5.

Unification was first started with .NET 5 in 2019, attempting to make it so that there would be “just one .NET going forward” targeting a variety of platforms, including Windows, Linux, macOS, iOS, Android, tvOS, watchOS and WebAssembly and more. With this release, the team says they are now integrating the Android, iOS, and macOS capabilities that are part of Xamarin into .NET 6, as well as extending the Blazor web framework to create ” a new kind of hybrid client app — combining web and native UI together.” Microsoft describes the possibilities of this “unification” effort:

I like the idea that since I’ve been using blazor for 2+ years now I’m about to go from a website dev who can’t maintain anyone’s existing apps to a dev who can build web, desktop and mobile with the same tools and skills.

Another highlight of .NET 6 is that of long term support, making this version one for use in production, as well as the addition of “significantly expanded” operating system support, which adds Android, iOS, Mac and Mac Catalyst, for x64 and Apple Silicon “M1”, and Windows Arm64.

Of course, being .NET, the list of new features is extensive and fully detailed in a lengthy blog post, but if you wanted a little more than we’re offering here, but a still-succinct summary, you might head on over to Neowin for the straight forward rundown, or to The Register, which calls the preview “still a mess” — as might be expected with an initial preview.

How is .NET 6 under preview when I haven’t gotten around with .NET 5😅

OH: 1024 containers should be enough for anyone

Mike is a freelance writer, editor, and all-around techie wordsmith. Mike has written for publications such as ReadWriteWeb, Venturebeat, and ProgrammableWeb. His first computer was a "portable" suitcase Compaq and he remembers 1200 baud quite clearly.
Read more from Mike Melanson
SHARE THIS STORY
RELATED STORIES
Top 5 Considerations for Better Security in Your CI/CD Pipeline Swarm, a User-Friendly Alternative to Kubernetes Application Storage Is Complex. Can Automation Simplify It? The Next Evolution of Virtualization Infrastructure .NET 7 Simplifies Route from Code to Cloud for Developers
TNS owner Insight Partners is an investor in: Docker.
SHARE THIS STORY
RELATED STORIES
WebAssembly Needs Schedulers, and Kubernetes Doesn't Quite Fit the Bill Connect to Remote Docker Machines with Docker Context Application Storage Is Complex. Can Automation Simplify It? Kubernetes Needs to Take a Lesson from Portainer on Ease-of-Use How to Deploy Containers with nerdctl
THE NEW STACK UPDATE A newsletter digest of the week’s most important stories & analyses.
The New stack does not sell your information or share it with unaffiliated third parties. By continuing, you agree to our Terms of Use and Privacy Policy.