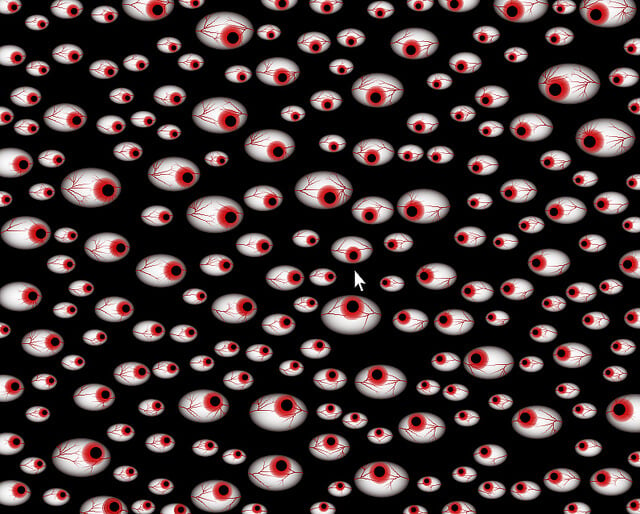 Is it an application problem or the internet?

“The chaos and complexity is increasing in the networking tier and for production IT teams. They’re using more cloud services, they’re using mobile, and various parts of the application are hosted in different ways,” said Nick Kephart, head of product marketing at ThousandEyes.

“The network has often been treated like a black box, particularly the internet itself. So we set out to understand the most important part of the network, which is the internet and all the services — internet service providers, content delivery networks, and so forth.”

You can go to sites and ask “Is Google Down?” or “Is iCloud down?”

“They might tell you a site is down, but few of them will tell you what part of the internet is having problems. For most customers, it’s not enough to know whether my primary service provider is working right now and is it working well?” Kephart explained.

“This is trying to tell you when there are Internet or network outages and put that in context of your own application.”

On Wednesday, ThousandEyes released Endpoint Agents, which provides visibility into status of every connection point — WiFi, VPN, Proxy —  in the network, right up to the endpoint device. While its customers already rely on ThousandEyes to understand how network behavior affects application delivery, this new service provides visibility into the experience of users working at home or on mobile devices.

ThousandEyes is not alone in this pursuit. Riverbed recently announced the acquisition of Aternity to add user-device-based monitoring to its offerings to help organizations asses end-user experience.

“As applications increasingly move to the cloud, delivered as SaaS offerings, organizations lose significant visibility of the availability and performance of their applications. The endpoint becomes a privileged vantage point from which to monitor the performance of SaaS providers,” according to Terry Cosgrove, Gartner enterprise mobility analyst. “Organizations will increasingly need the ability to pinpoint if a problem is on the vendor side, with the public/private network infrastructure, or on the customer/enterprise side.”
Focused on troubleshooting

“You can understand the performance of all the parts between you and whatever’s hosting that application — CDNs, load balancing across multiple data centers around the world. Those can be important for operations teams as well as application developers when they think about how this code is deployed in the real world,” Kephart said.

It won’t replace application performance management solutions such as New Relic or AppDynamics, though. It monitors at the user level, not the code level.

It works across all kinds of application environments, across application code written in Java or .NET or myriad other languages.

“We’re just looking for a web server or a VOIP server to respond to requests. And whether they respond with the performance we expect. It’s agnostic in that sense.

“It will set baselines around expected response time, the expected latency. You also can set thresholds yourself. You could say you expect to access email from all sites on the WAN within three seconds. This will obviously vary greatly depending on the application, the organization’s architecture and how global these organizations are,” Kephart said.

While in the future the system might offer suggested actions to take to mitigate problems, for now, it’s focused on troubleshooting and network planning. It’s used largely by relatively sophisticated operations teams and in some cases call desks, though the company has seen broader use in DevOps organizations, depending on how cross-functional they are, he said.

It tracks hop-by-hop performance and can pinpoint complex problems such as loss per interface, latency per link and path changes over time anywhere between client and server.

The system collects detailed forensic data of network topologies, dependencies and behavior; provides visualizations to help you quickly troubleshoot problems across diverse network segments, services and applications; brings together multiple layers of network data from multiple regions, and shares performance and outage information detected from its broad customer base.

Its customers include Ticketmaster, Sotheby’s and iHeartMedia.

“ThousandEyes has been a key tool for us in both day-to-day use and large-scale traffic engineering efforts. The insight and data allow us to better understand the impact of our changes to end users as well as a better interactions with our transit providers,” said Alexei Rodriguez, vice president of operations at Evernote. 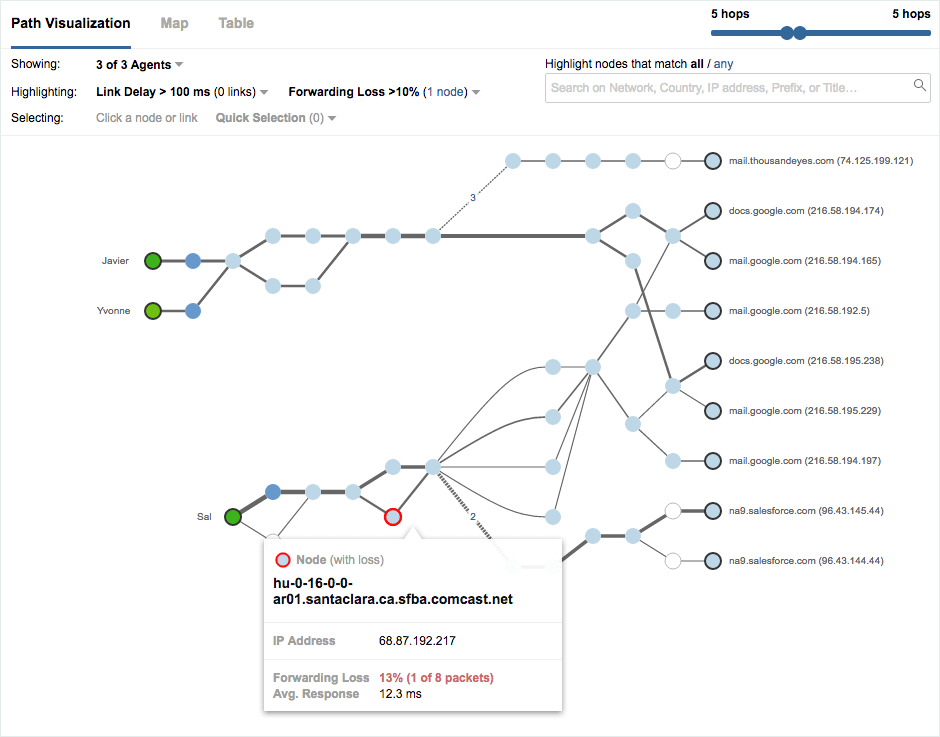 Endpoint Agents can track performance across a global WANs

AIM Specialty Health senior manager Ivan Shepherd, who leads its network and technical security team, spoke at ThousandEyes’ recent Connect event about how it worked with the company to set up its telecommuter program, in which medical specialists connect their laptops and VOIP phone service remotely.

The carrier that AIM Specialty chose had nationwide Border Gateway Protocol (BGP) issues that network monitoring tools like Ping, Curl, SNMP or IP SLA were not helping to resolve. ThousandEyes’ path visualization snapshot, however, helped the company pinpoint exactly where packet loss was occurring and make better decisions about remediation.

Enterprise agents have provided network visibility across partner sites, he said and provide precise information for service calls to ISPs, who in the past might stonewall about service problems.

The company was founded in 2010 and has raised $60.6 million, including a $35 million Series C last February.

There are an array of services monitoring internal applications as well as those hosted externally. However, James Turnbull, author of “The Art of Monitoring,” which focuses on microservices monitoring, says most current tools are not well-suited to a container or services architecture. He points to Datadog and New Relic and open source tools Sensu and Nagios among those updating to support containerization. AppDynamics just announced microservices support.

ThousandEyes announced support for Docker in April, with Kephart focusing on its visibility into the underlying network and its impact on containerized applications.

In May, it announced agent-to-agent tests, allowing organizations to map both forward and reverse paths between endpoints to better understand where a problem might originate.

A report from 451 Research called ThousandEyes an “an innovative and differentiated” approach to the networking problems of SaaS applications, yet noted it will compete with established application performance management offerings in the enterprise.

451 networking analyst Jim Duffy called it unique in its “SaaS-native” offering and a complement to enterprise APM deployments.

Susan Hall is the Sponsor Editor for The New Stack. Her job is to help sponsors attain the widest readership possible for their contributed content. She has written for The New Stack since its early days, as well as sites...
Read more from Susan Hall
SHARE THIS STORY
RELATED STORIES
Deep Work: A Better Way to Measure Developer Velocity  Enabling Collaborative K8s Troubleshooting with ChatOps The Journey to Transformational Observability ServiceNow Launches UQL for Observable Kubernetes Apps CEO Raj Dutt Interview: The Grafana Experience Will Change
TNS owner Insight Partners is an investor in: Docker.
SHARE THIS STORY
RELATED STORIES
A Tactical Field Guide to Optimizing APM Bills Enabling Collaborative K8s Troubleshooting with ChatOps Record, Connect and Search DevOps Changes with Kosli ServiceNow Launches UQL for Observable Kubernetes Apps Opening up: OpenTelemetry for Greenfield Environments
THE NEW STACK UPDATE A newsletter digest of the week’s most important stories & analyses.
The New stack does not sell your information or share it with unaffiliated third parties. By continuing, you agree to our Terms of Use and Privacy Policy.