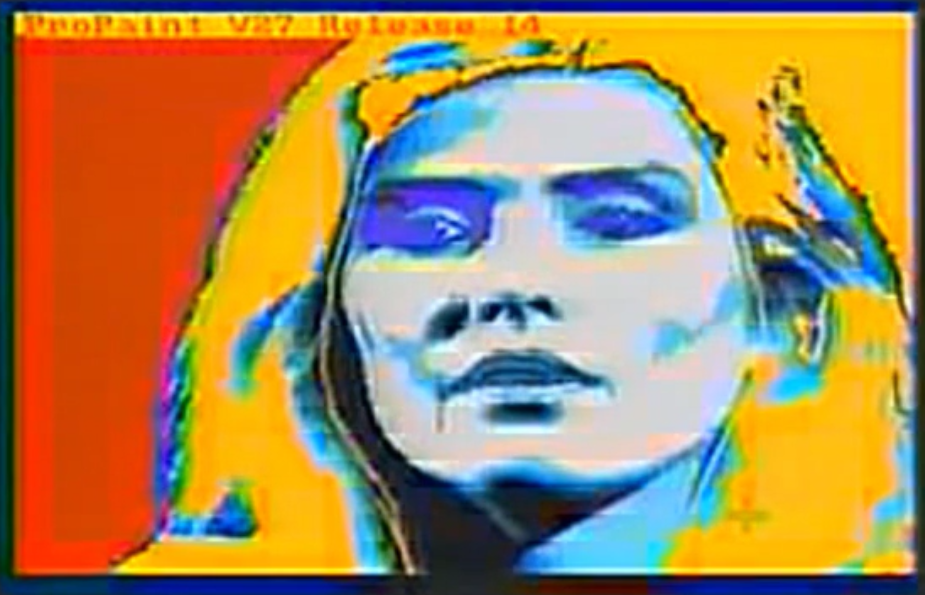 Next month marks the 30th anniversary of Andy Warhol’s death. He died eight days after Valentine’s Day in 1987, at the age of 58. So it’s a good time to look back at how one of the art icons of the 20th century first confronted the arrival of a genuinely new technology — the personal computer.

Warhol began life as the son of an immigrant coal-miner in Pittsburgh, Pennsylvania, but went on to create some of the most expensive paintings ever sold.

In fact, his investigations of “pop art” may have stemmed from his early career as a commercial artist, which gave him a unique understanding of the technology of celebrity, thank in no small part to all those mass-produced photographs…

But the last years of his life were especially interesting, including a cable TV show for MTV — called, of course, “Andy Warhol’s 15 Minutes.” (“MTV presents a half hour of night life new bands, and hip people saying weird things,” teased one promo ad.)

And there was even a guest appearance on The Love Boat, a cameo in the Dustin Hoffman movie Tootsie, and a role in the official music video for 1984 hit single “Hello Again” by The Cars. But that was also, of course, the year Apple unveiled their ground-breaking “1984” ad (directed by Ridley Scott) to announce their new Macintosh personal computer…

When the next year Amiga announced their Amiga 1000, the company was desperate to make an even bigger splash, remembers a recent article Motherboard. “The first model of the Amiga had a number of major advantages over the initial iteration of the Mac, including its broad color palette, its impressive animation capabilities, and its ability to multitask.”

Who better to show off its potential than Andy Warhol?

Wearing a tuxedo and a bow tie, Amiga’s head of software engineering, Robert Pariseau, first took the stage to dramatically announce “the world premiere of the Amiga” at New York City’s Lincoln Center. He told the crowd that “What are you about to witness is the result of an effort of research and engineering that began in 1982 and which to date has consumed over 100 man-years of engineering talent.”

Showing off its clock and “preferences” tool on the utility workbench, Pariseau explains that “At Amiga, the user controls how he uses his time, not the computer.” There’s a Textcraft word processor, a “very rich user interface” involving both menus and cursor icons.

Pariseau drew applause for showing the Amiga’s 4096 colors, some simple animated graphics, applications that ran in separate windows, and the ability to generate both bar charts and pie charts. He dazzled the audience by producing a 3.5-inch floppy disk which contains a magical emulator for the IBM PC. (“Yes, it’s done in software. How does it work? That’s a secret…”)

“He was fine, but he was no Steve Jobs,” opined Motherboard, adding “Fortunately, Commodore had something better…Andy Warhol and Deborah Harry, who came out to demo the machine’s artistic capabilities.”

In the last three minutes of the video above, Deborah Harry, the lead singer for the group Blondie, asked “Are you ready to paint me,” while fluffing her hair. Resident Amiga artist Jack Hager (also on the stage, and wearing a tuxedo) announces he’ll assist Andy Warhol in his very first computer portrait using the Amiga. “First off, Andy is going to take a digital snapshot of Debbie… You’ve found it to be very spontaneous, haven’t you?” he prompts.

“It’s such a great thing,” he added unconvincingly, which actually draws skeptical laughter from the audience.

“What more can you say?” Jack Hager says gamely. 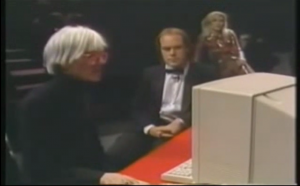 Hager continues narrating Warhol’s use of the now-primitive software: “Andy is selecting from the Menu bar, which gives you all the features of the Paint system, and he’s selecting ‘Fill’…” When the yellow he’s selected for Harry’s yellow hair leaks all the way to the corners of the image, Warhol — always a fan of accidental flourishes — said “Well this is kind of pretty. I think I’ll keep it.”

When asked what computer’s he’s worked on, Warhol drew applause by suggesting he hasn’t used any. “I waited, uh, for this one.”

Warhol remembered later it was like showing his work at a museum — while he was creating it.

And when asked how his hip artist friends felt about this new concept of computer art, Warhol replied “They all like it. They have been using the Xerox, and they can’t wait until they can use this, because there are so many people into xerox art.” Prior to the personal computer, Xerox machines were the state-of-the-art in electronic reproductions, and citing one of Warhol’s experiments in 1969, another site suggests Warhol “likely was the first person to think that putting his face onto a photocopier was a good idea.”

By the 1970s Warhol had moved on to a Polaroid camera that, according to Wikipedia, “Polaroid kept in production especially for Warhol.” But by 1985, Warhol was saying that “The thing that I like most about doing art on the computer is that it looks like my work.”

His new enthusiasm for the personal computer, and especially for the Amiga, was entirely genuine. “Towards the end of his life, he began to create works using Amiga computers,” remembered the Computer History Museum, adding “It should be no surprise that Warhol was interested in computers; he’d been fascinated with popular culture for decades and computers had moved beyond being mysterious tools to become items encountered in everyday life…add to that the artistic potential of such machines and it’s not at all a stretch to see his interest.”

The museum reports that Steve Jobs had tried to call Andy Warhol to give him a Macintosh, but “Warhol had never returned his calls, seeing no reason to consider computers.” And yet Warhol eventually met Steve Jobs at a 1984 birthday party for the nine-year-old son of John Lennon. Also, there was New York artist Keith Haring.

At first, Warhol and Haring watched as Jobs showed Sean how to work with the machine. After a while, Warhol took Sean’s place in front of the Mac while Jobs tried to explain how to use a mouse. It took a while, but finally Warhol used the Pencil tool to draw.

“Look! Keith! I drew a circle!” Warhol said to Haring.

Motherboard reports that Warhol ultimately developed more than a passing interest in Amiga’s personal computers. “Warhol acquired several Amigas and began creating works with them, including a short film using the Amiga 1000 titled “YOU ARE THE ONE.” This featured twenty digitized images of Marilyn Monroe from 1950s newsreel footage, manipulated by Warhol with the Amiga…set to music.” The film was never shown until nearly 20 years after his death — once, by the Museum of New Art in Detroit. 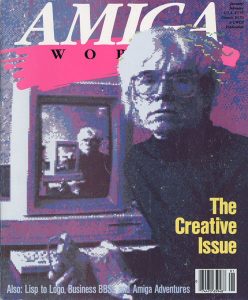 From the Computer History Museum.

But he did more than create a cover. The recalcitrant artist even agreed to give a rare interview to Amiga World. Albeit a strange interview, conducted while Warhol worked on “the crimson polarized wash of the Day-Glo Dolly Parton,” distracting himself by changing the colors. (“Gee, if we had a printer now, I could just print these out and send them to Dolly Parton in all these different colors,” Warhol murmurs. “It would save us a lot of trouble.”)

The two interviewers aren’t sure what to ask Andy Warhol, finally opening with “Is this the greatest thing since sliced bread?”

Two years before his death, Warhol seemed uncannily aware of this new device’s disruptive potential. When asked if he foresaw people using personal computers for video editing, Warhol didn’t want to suggest such a limited future. “I think anything… anyone can use it.” 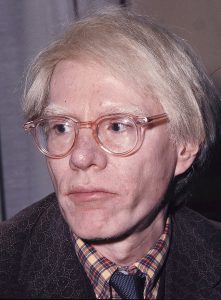 Did he think people would create more personal art? “That too, yeah…”

Did he think using a computer was limiting? “No.”

Did he see himself using it as a major tool? “Oh yeah. It would save a lot of time.”

And when asked if he missed getting his hands in the paint, he replied, “No. No, it’s really great not to get your hands in paint.”

So why hadn’t he ever done anything with computers? “Oh, I don’t know. MIT called me for about 10 years or so but I just never went up… Maybe it was Yale.”

It’s a fun glimpse at the artist in his mid-50s, as he greets the arrival into the world of a genuinely new technology. Warhol seemed intrigued by the idea of interactive fiction, but said he didn’t play games because “I’m not fast enough.” But already looking towards the future, he suggests the possibility of massive 20 x 30-foot printouts, says he thought he’d have a light pen by now and imagined how great it would be to have a touch screen.

And at some point, the interviewer finally asked him the ultimate question — if there was anything that he didn’t like about his new Amiga personal computer. Warhol replies “No, no, I love the machine… .

“And if we can get a printer, I’ll do this portrait in four different colors and send them out to Dolly.”