That Time the U.S. Navy Tried to Develop Exploding Sharks 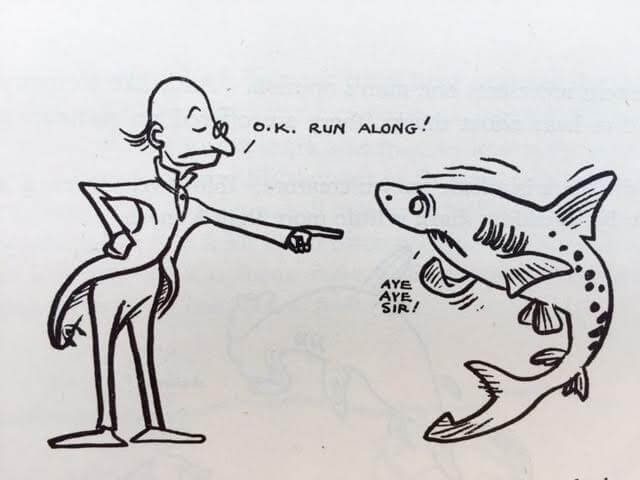 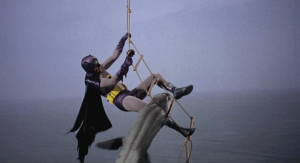 You know how great ideas seem to come to multiple deep thinkers at the same time?

There is a scene in the 1966 “Batman” movie where the caped crusader fought an exploding shark. At that exact moment in history, the U.S. Navy was in the middle of a 13-year project to develop exploding sharks!

Last week, Mary Roach (who the Washington Post called “America’s funniest science writer”) published an article citing recently-declassified documents about the Navy’s post-war experimentation with shark-delivered munitions. While researching a book about “The Curious Science of Humans at War,” Roach discovered the first hints about this bizarre Navy experiment, which ran from 1958 to 1971. Deep within an article in Marine Fisheries Review, Roach found a reference to a project to “convert the shark into a remote-controlled torpedo that could ram a ship while carrying a load of explosives.”

But a co-founder of MuckRock.com investigative website knew a lot about requesting public records, and he later helped Roach obtain a copy of the Navy’s official final report about their strange 13-year project…

The Navy’s complicated plan was to turn sharks magically into maneuverable torpedoes using a headgear that delivered shocks to steer the sharks towards enemy targets. The shark’s entire course would be pre-programmed into the headgear, which could sense whenever the sharks were straying off-course. Shark biologists teamed up with gadget-man Snodgrass to develop the sophisticated course-tracking mechanisms that also shocked the sharks. These stealthy predators of the sea — the top animal in the undersea food chain — would be used to create a strategically significant army of attacking fish.

Sharks draw oxygen gradually out of the water using their gills their bodies have a uniform density, which hides them from sonar systems which are searching for differences in density.

But in the end, the project failed — because the sharks didn’t want to do it. “We were repeatedly impressed… with the shark’s inability to respond to prolonged electrical stimulation,” concluded the Navy, after 13 years of research. The Navy even investigated strapping explosives to other animals, but found their options to be “surprisingly limited.”

Their final report — dated June 16, 1971 — announces, in a most somber tone, that “We have serious reservations concerning the suitability of a shark as a vehicle for command guidance or for transporting a payload any distance.”

But even today there seem to be echoes of that program. Last year it was reported that the Navy is now training dolphins to hunt for undersea mines at The Navy Marine Mammal Program in San Diego. And in 2012 “Wired” ran an article about a marine biologist’s experiment that involved clipping an underwater laser to the tail of a shark — in a thoughtful analysis titled “Finally, a Shark With a Laser.”

Despite the failure of the program, the Navy’s original shark idea had some merits. Sharks are stealthy — much quieter than dolphins — and can also swim long distances. And unlike dolphins, sharks are even invisible to sonar. Sharks draw oxygen gradually out of the water using their gills their bodies have a uniform density, which hides them from sonar systems which are searching for differences in density. Finally, “Should the mission fail,” the report notes that a dead shark will just sink to the bottom of the ocean —  rather than floating indiscriminately to the surface with a Navy-issue headset.

The declassified document also indicates that the Navy thoughts dolphins were just too smart to control easily. But sharks may also have been led to the Navy by an accident of history. By the end of World War II, the Navy had already spent several years researching sharks to develop a shark repellent. In fact, Julia Child, the famous French chef, remembered this as one of the projects she worked on during her time in America’s wartime intelligence agency, before she began studying the art of cooking. On a special web page, the CIA remembers that back in 1942 Child was “self-admittedly a disaster in the kitchen,” joking “Perhaps all the more fitting that she soon found herself helping to develop a recipe that even a shark would refuse to eat.”

Interestingly, even that shark repellent made an appearance in the 1966 movie “Batman,” in which Batman fights an about-to-explode shark that’s latched on to his leg. “Holy sardine!” shouts Robin, as Batman punches the shark, but to no avail. He resorts to his extensive collection of oceanic repellent sprays — which includes shark repellent — then later tells the press it was “an unfortunate animal who chanced to swallow a floating mine,” (adding “I wouldn’t worry about that). So even while the Navy was pursuing their secret classified program to weaponize sharks, Hollywood was making a movie where the same tactic was being deployed by Catwoman, Joker, Penguin, and The Riddler.

So perhaps it’s also somehow oddly appropriate that the last word on the Navy’s failed experiment should come from Batman’s evil arch-nemesis the Riddler. In the movie, Riddler complains that their elaborate plan to defeat the caped crusader — developed by super-villain The Penguin — had been so easily foiled. The Riddler sneers mockingly…

“You and your trained exploding shark…”