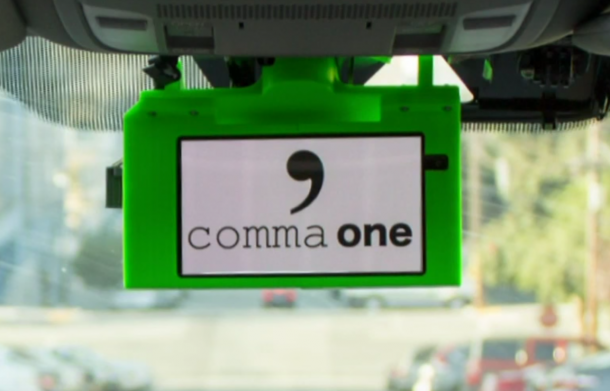 University of Nebraska student Brevan Jorgenson replaced his rear view mirror with a homemade device that controls the auto’s brakes, accelerator, and steering, identifying potential obstacles by using a camera, reported the MIT Technology Review. And Bay Area resident Kiki Jewell is performing the same modifications on her Chevy Bolt.

They’re using hardware designs and open source software released by Comma, a self-driving car startup that decided to give away its technology for free last year after the U.S. National Highway Traffic Safety Administration questioned the safety of the device.

The car-controlling “Neo” devices use a OnePlus 3 smartphone (using Comma’s now free software, Openpilot) that communicates with the car’s electronics through a circuit board. Comma had originally planned to sell the devices for $999, which support 2016 models of the Honda Civic and Acura ILX, and a Los Angeles-based startup is also selling pre-assembled kits for $1,495. But if you want to build the DIY version, the parts cost about $700.

The software actually requests human intervention if it becomes confused, and reminds the driver to touch the steering wheel — at least once every five minutes. But it’s just one approach in a new hacker community that’s exploring whether individuals can use off-the-shelf parts to create their own self-driving cars.

A new Kickstarter campaign is also offering pledgers a car-hacking tool that will unlock the diagnostics, telematics, and security features of any model of car. And MIT Technology Review also spoke to a software hobbyist in Barranquilla, Colombia who’s modifying his Ford Fusion to slow down automatically for road hazards like potholes, speed bumps, and traffic signs. His philosophy is that instead of working towards relieving drivers of the onerous duties of piloting, why not focus more on just making cars safer. “I am less interested in full autonomy and more in preventing rear-endings,” he told the magazine, adding “A lot of existing cars can be retrofitted.”

If you’re interested in self-driving cars, there’s a lot of ways to get started. The online education site Udacity actually offers a whole “nanodegree” program for Self-Driving Car Engineers and is open sourcing the code from an ongoing project to create piloting software, as well as the data gathered from its self-driving test cars.

But there’s some extra excitement in the community today as reports are coming back from the road from people using Comma’s DIY kits “out in the wild.”

Digital Trends tracked down a video of the car in action by the enterprising Nebraska tinkerer. His reflection in the smartphone glass shows clearly that he’s holding the movie camera with both hands — and narrating the drive — while his vehicle trundles obliviously down the highway at 46 miles per hour. He films the little cable that runs through the ceiling to connect the device to the car’s OEM camera — and also points out the parking pass dangling from the device where his rear-view mirror used to be.

“It’s doing an excellent job so far,” he said. “I’m really impressed with it.”

His first test drive was solo because “if anything went wrong I didn’t want anybody else in the car,” he said. He was thrilled — “It worked phenomenally” — and reportedly its similar to Tesla’s “AutoPilot.” Next, he took his grandmother for a night-time joyride down the highway — but his girlfriend still refuses to travel in the car with the self-driving device. “She’s worried it’s going to crash the car,” he said.

Digital Trends reports that his project’s next milestone will be a 7.5-hour road trip — to visit her.

The reporter at MIT Technology Review tried to nail down whether or not this is actually legal by talking to a law professor at the University of South Carolina who advises the U.S. Transportation Department on automation law. The professor pointed out that the NHTSA has the power to regular companies selling vehicle-modification systems, but for individuals, it’s a different story.

You’re still “civilly liable” for what your vehicle does, but can you modify it? Absolutely.

So then the real question just becomes: would you trust your life to a car being driven by a homemade auto-piloting kit? “Nice job, but I imagine driving the interstate in Nebraska late at night is a lot easier to engineer than, say, L.A. at rush hour, or city streets just about anywhere,” read on one of the skeptical comments on MIT’s article.

“Is it cool that this person did this DIY at that price?” someone else pondered on Reddit. “Yes. Is it something I would trust myself or someone else to do on my car. Absolutely not.”